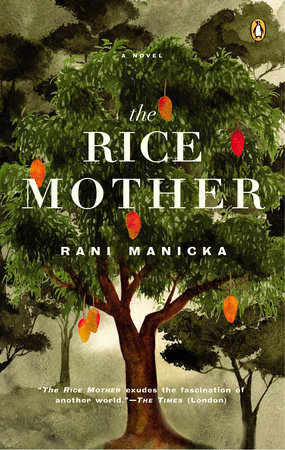 “My uncle said, My heart is my bamboo, and if I treat it kindly and listen for its song, the highest, biggest nest will surely be mine.” —Lakshmi, The Rice Mother

Rani Manicka’s debut novel—as luscious and mysterious as its Malaysian backdrop—is more than an engrossing family epic. Interweaving magical realism with traditional folklore and studded with an array of evocative motifs, it is a work rich with symbolism. Readers will ponder the special meaning of spiders and birds as well as the colors black and red, and they will wonder what the words “singing bamboo” mean to Lakshmi’s family long after finishing the book. Above all, it is a meditation on emotional and psychological wounds that take generations to heal—the consuming nature of repressed grief—and about how even a Rice Mother cannot save her children from savage tragedy.

During World War II, Mohini, Lakshmi and Ayah’s stunningly beautiful daughter, is raped and probably murdered by the occupying Japanese troops. Mohini was so beautiful that Lakshmi hid her beneath the floorboards of their house for much of the war. But as the soldiers approached one day and Lakshmi hustled her family to safety, Lakshmnan—Mohini’s twin—slipped and fell, accidentally exposing Mohini’s hiding place. Mohini was taken by the soldiers and was never seen again, her disappearance violently altering the lives of all who loved her.

Lakshmnan blames himself for Mohini’s death, and believes that his mother does as well. Their relationship never recovers. Lakshmi is haunted by Mohini’s sufferings—and by the many other travesties that the war and poverty forced Lakshmi and her family to endure. But in response to such pain and guilt, Lakshmi steels herself against the world, forcing her children into arranged marriages that, however unhappy, bear her grandchildren.

Lakshmi’s children, too, mute their grief. Lakshmnan becomes a compulsive gambler and Sevenese retreats to the underbelly of Malaysia and Thailand. Then Rani, Lakshmnan’s harsh wife, gives birth to Dimple. A mirror image of Mohini, Dimple is coddled by her grandparents. She and her uncle Sevenese develop a peculiar yet strong bond, and it is with a sense of foreboding that Sevenese watches her fall in love with her future husband, Luke, who introduces her to the opium that will eventually kill her. But before her addiction takes root, Dimple begins recording her family’s stories on cassette—not just the bad stories, but the good ones, too—encouraging her grandmother, aunts and uncles to cherish their good memories.

Years pass before the reader is introduced to Dimple’s daughter, Nisha, who, due to the mental distress she suffers after witnessing her mother’s death, is kept by Luke from her maternal relatives. Upon his death, Luke leaves her the keys to the tapes that Dimple recorded and to the house that he once built for his young bride. And so Nisha begins the process of recollecting what the years—and her father—encouraged her to suppress. She is the first of Lakshmi’s descendants to heed her great-great uncle’s advice, which comprises the novel’s prologue: to tap on the bamboo to hear its song and to know a good one from a bad one. Nisha, it seems, slowly unbraiding the past, will be the first to do so, to hold the precious birds’ nest in her own hands.

Rani Manicka, an economics graduate, was born and educated in Malaysia and lives in England. Infused with her own South Asian family history, The Rice Mother is her first novel. It recently won a Commonwealth Writers Prize for 2003.

A CONVERSATION WITH RANI MANICKA

Please talk about the prologue of your novel. Did you write this specifically for The Rice Mother or is it a story passed down through your family, or Malaysian folklore?

I remember well the first time I saw those amazing bird-nest collectors. Tiny, tiny mahogany men—their faces, in the absence of fear, masks of strange beauty; a bamboo torch clenched in one hand and a knife in the other—hanging hundreds of feet above cruel rocks. I knew instantly I had to incorporate the magnificence of their spirit into my book.

In college, rather than studying literature or writing, you were a management trainee. Still, were you a reader growing up? If so, who were your main influences, and which writers are your favorites now?

Yes, I read voraciously. My taste keeps changing though. When I was younger and still wore rosy spectacles, it was an unremitting diet of romance paperbacks; but now that I am grown up, and the world a little more tired and jaded, Mario Puzo, Margaret Atwood, Anita Brookner, Anne Tyler, Martin Amis, and very recently Sarah Hall come to mind.

Will you describe your writing process? What was it like when you embarked on your first fiction endeavor? Has it changed, gotten easier—or harder?

The writing process is easy. There is no struggle with words, only with distractions: the garden, the phone, the television, the fridge, the pub….But usually I can be trusted to wake up in the morning, crawl downstairs, get a mug of tea, and switch on the computer. Good days mean I walk away having fed the computer 2,000 words, and lazy days mean I have turned away before even reaching 1,000. Like all things, writing gets easier with practice. Certainly I learned a great deal when my book was edited for the first time. Looking back at the original manuscript now makes me cringe.

What was the seed of this novel? Did it evolve into a work different from what you imagined it to be? If so, how?

The seed was always my grandmother’s indomitable energy, the way she refused to give up, and the way she could turn her hand to anything she set her mind to do, whether it was sewing, gardening, cooking, or running a profitable business during the Japanese occupation. A woman who baked cakes without using a scale to measure the ingredients—everything done “by eye.” If she had lived in my time she would surely be running a Fortune 500 company. Of course, greatness is a double-edged sword. She fell on hers. By the time I knew her she was an old, defeated woman sitting behind the half-open door of her wooden house bitterly watching the world go by. “She is a toothless tiger now,” my mother said. I remember then looking into my grandmother’s eyes and wondering what that tiger must have looked like when it had all its teeth. In writing The Rice Mother I wanted only to return her to an exotic yet harsh world where her spirit could roam fierce and wonderful again.

Very often, I think, whether it is a piece of music, art, or writing, a work is “given.” I don’t know if I can explain this satisfactorily, but even before a single word has gone on the page I already know what the first and last pages are going to be. I knew the beginning and the ending of The Rice Mother the same way I already know what the beginning and ending of the next two books will be. And sometimes, not all the time, I read bits of my own work and think, “Did I really write that?”

How much Malaysian folklore is woven into the novel? Did the book’s writing require much research? Was this research of the oral kind (listening to people’s stories) or was there actual library time involved?

Storytelling is such a natural part of Malaysian life. I remember dinnertime with my mother: “Come on, open your mouth…And eventually when the mousedeer was dead…Chew properly…the dog turned to the King and said, ‘Now do you believe me, that your Queen is faithless?’…There’s a good girl…and the old King fell to the ground sobbing…Is your mouth empty yet?”

Consequently, the only real research I had to do was about the horrors of the Japanese occupation. The rest I got from an angel I call Mum.

Will you discuss your own experiences and opinions about the resiliency of the human spirit, and the adage “Time heals all wounds?”

Yes, I often think that resiliency is one of my best assets, the ability to bounce back, dust myself off, and declare, “Obviously much better than this was meant for me.” The willingness to trust that my soul keeps knowledge I know not yet of, and to move along to the next thing that invariably turns out to be a better path. While I will not try to argue with “Time heals all wounds,” I will say that forgetting should always remain impossible. What an evolutionary disaster if we could forget our sorrows and mistakes altogether!

Now that you live away from Malaysia, what do you miss most about it?

My parents. I often think that there is nothing that will happen to me in the near future that will distress me as much as the loss of them.