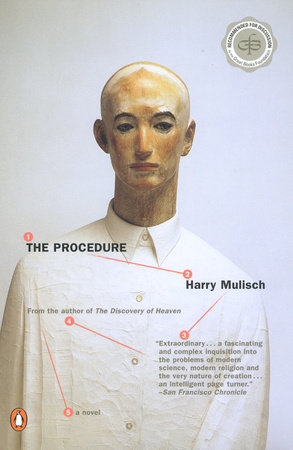 If we can assume that, like most authors, Harry Mulisch wants his work to be read, what are we to make of the first page ofThe Procedure, where the novel’s narrator tells us that “anyone who wants to be swept along immediately, in order to kill time, would do better to close this book at once, put the television on, and sink back on the settee as one does in a hot foam bath” (p. 3)? In The Procedure, as in his other novels (which include The Assault, Last Call, and The Discovery of Heaven), Mulisch is not afraid to deal with such complex and weighty themes as creation, meaning, life, death, and love, and in doing so, he draws upon Judeo-Christian creation stories, popular mythologies, and the modern science of genetics. The Procedure is a sustained meditation on how the world and its inhabitants have come into being; at the same time, it reflects on its own creation and the creative processes of its author. The narrator’s admonition indicates that these ideas cannot be considered in haste.

The main character of The Procedure is Victor Werker, a geneticist who has discovered a process for creating life. Mulisch continually defies and subverts conventional narrative structures, however, and Victor appears only after an explanation of how the world was originally created in Hebrew, with words and letters acting as molecules and atoms. In fact, the unusual structure of the novel is as much a part of the book’s theme as are the plot and characters. Are we to assume, then, that complex stories always require a complex telling? Instead of chapters, the novel is divided into three sections or “deeds” (A, B, and C) that are subdivided into a total of twelve “documents,” so that the entire text has the feel of a legal record or a scientific report. Victor observes that “everything is always also something else” (p. 125). By writing a novel that masquerades as a legal or scientific text, Mulisch asks us to consider what distinguishes these different kinds of writing and what they have in common.

The first deed, “Speaking,” plunges into a discussion of Sefer Yetsirah, The Book of Creation, in order to make a connection between the power of language and the will to create. As Victor later notes, “Life begins with speaking” (p. 85). Like a scientist studying the building blocks of life, Mulisch analyzes the materials from which he will build his novel: the letters of the alphabet. This first section establishes links between theology, science, art, and reproduction by examining the generative power of language in the creation stories of Adam and Eve, Lilith (Adam’s first wife), and the Golem of Prague. Like a golem, a creature made from clay and brought to life by invoking a specific sequence of letters, Victor’s eobiont—an artificial life form—is dependent upon the set of letters used to label the crucial DNA sequence. According to legend, a golem is only a poor imitation of human form, and we might suspect that the eobiont will eventually exhibit similar flaws. If we are meant to understand that there is a common denominator at work in all acts of creation—sexual, scientific, and even literary—it may be that they share something with the original divine act of creation, or perhaps that they are fraught with difficulty and imperfection.

The second deed, “The Spokesman,” begins to shed light on the scientific pursuits that have defined Victor’s life. Victor recounts his development of the eobiont in a series of letters written to his stillborn daughter, Aurora. Victor sends these letters to Aurora’s mother, Clara, who left him after her pregnancy. Here Mulisch emphasizes the risks and complications involved in every act of creation. Victor is painfully aware of the irony that he has succeeded in creating life artificially but has failed to do so naturally. These two efforts at creation raise numerous questions, among them whether there is a basic desire to create that transcends specific objectives, and whether or not a distinction between artificial and natural means of creation really exists. Victor also becomes aware of the disturbing parallels between his eobiont and the monster created by Victor Frankenstein in Mary Shelley’s novel. The allusion suggests the possibility that, like Frankenstein, Victor may have failed to consider fully the consequences of creating life in a laboratory and made too many sacrifices in the process.

Shifting back to a third-person narrator, the novel’s final section, Deed C, “The Conversation,” draws together the various fragments of Victor’s life. In this section, Mulisch compares Victor to Pygmalion (the mythical artist who fell in love with his own creation). Implicit in the comparison is the question of what separates science from art. The central event is Victor’s reunion with his “milk brothers,” the triplets his mother nursed, whom he has not seen since he was a child. Victor’s motive for this reunion remains uncertain. He may want to reestablish a connection with the natural process of reproduction, or perhaps he is searching for a family to fill the void left by his stillborn daughter and his estranged wife.

In The Procedure, Mulisch explores the structure of life—in the biological sense—and the structure of narrative, and at times the two seem nearly indistinguishable. The numerous parallels between theology and science, art and science, art and religion, and language and technology are ultimately as important as the development and resolution of the novel’s complex plot. From the opening warning to readers expecting a breezy tale, Mulisch challenges assumptions about stories of creation.

Harry Mulisch was born in Holland on July 29, 1927, to an Austro-Hungarian father and a Jewish mother from Antwerp. A prolific writer of novels, short stories, essays, poetry, plays, and philosophical works, he has won numerous awards, including, in 1977, both the P. C. Hooft Prize and the Constantijn Huygens Prize. Relatively few of his works have been translated from Dutch into English. The best known of these are his novels The Assault (1982), Last Call (1985), and The Discovery of Heaven (1992). The Assault, an international bestseller, was adapted for the screen and won an Academy Award for Best Foreign Film in 1986. Most readers and critics consider The Discovery of Heaven to be Mulisch’s magnum opus. Typical of Mulisch’s style, The Discovery of Heaven is a challenging work that blends philosophical, psychological, scientific, and theological inquiries to tell a complex tale about a hedonistic astronomer who befriends a cerebral philologist. Among his most significant untranslated works are Het seksuele bolwerk (1973), a biography of Wilhelm Reich, and De zaak 40/61 (1962), a report on the trial of Adolf Eichmann.

Michael Chabon, The Amazing Adventures of Kavalier and Clay (2000)
After escaping Nazi-occupied Prague, Joe Kavalier makes his way to Brooklyn and his cousin Sam Clay. Their relationship and the comics they create together are the heart of this epic novel about the possibilities and loneliness of American life.

Cees Noteboom, The Following Story (1991; English translation 1994)
Winner of the 1993 European Literary Prize, this novella incorporates philosophy, mythology, science, and humor to tell the story of a failed love affair between a professor of classical languages and a biology teacher, both of whom are fascinated with the metamorphoses that characterize life and death.

Mary Shelley, Frankenstein; or, The Modern Prometheus (1818)
Victor Frankenstein unlocks the secrets of life, only to create a monster that threatens to destroy everything he loves.

Learn More About The Procedure
print

The Unusual Life of Tristan Smith

The Wall
Back to Top