The Color of Light Reader’s Guide 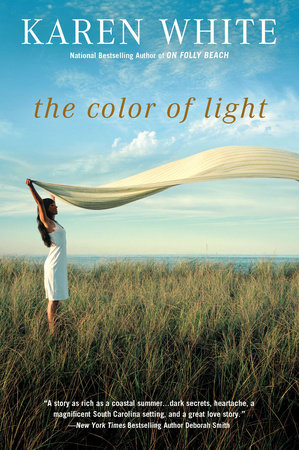 The Color of Light Reader’s Guide

INTRODUCTION
At thirty-two, pregnant and recently divorced, Jillian Parrish and her seven-year-old daughter find refuge and solace on Pawleys Island, South Carolina. Jillian had experienced her best childhood memories here—until her best friend Lauren Mills disappeared, never to be found. At the time, Linc Rising, Lauren’s boyfriend and Jillian’s confidant, had been a suspect in Lauren’s disappearance. Now he’s back on Pawleys Island—renovating the old Mills house. And as ghosts of the past are resurrected, and Jillian’s daughter begins having eerie conversations with an imaginary friend named Lauren, Jillian and Linc will uncover the truth about Lauren’s disappearance and about the feelings they have buried for sixteen years.

Karen White is the author of four previous books. She lives with her family near Atlanta, Georgia.

A CONVERSATION WITH KAREN WHITE
What inspired you to write The Color of Light? Is Lauren’s disappearance based on true events?

The Color of Light is not inspired by any factual events (which is probably a good thing). I’m a huge fan of plot twists, and the idea of Lauren’s disappearance stemmed from that. I also love stories where the villain isn’t always a villain—that there’s something redeemable or understandable about the villain’s actions. It’s so much closer to real life, and more identifiable to readers.

Are you a full-time Mom, or do you work outside of the home? How do you balance these responsibilities with your writing life?

I am a full-time Mom to two children. I’m very blessed to be able to pursue my career as a writer while staying at home to raise my children. This doesn’t make it easy, however! I have to be very, very organized. Unfortunately, there’s always a deficit of time and I find that my sleep is the first thing to be sacrificed when I’m working on a novel. It’s a constant juggling act and when it gets too rough, I take a nap. I’m a huge believer in naps.

Your characters evoke a great empathy, even though they are flawed. Jillian, Gracie, Linc and Janie are all very human. Who or what inspires these characters? Do you identify with any of them?

I enjoy reading books about believable characters. Believable characters, to me, are simply those who are not perfect—like real people. I like to see people grow and change which means that at the beginning of the book, my characters have to have an impossibly high mountain in front of them. But I also give them something in their character to find the tools necessary to climb that mountain and move on. With Jillian, it’s her boundless hope. With Linc, it’s his need for justice. It’s what made me love both characters and root for them.

These characters are strictly from my imagination—or maybe they’re a collage of people in my life. I’m not sure because I never know where my characters come from. I imagine it’s inevitable that an author will draw on his or her own experiences to create characters. As for identifying with any of my characters from The Color of Light, I’d probably say Jillian. She uses self-deprecating humor to smooth over the rough spots in her life which is something I know that I do as well. That’s where the resemblance ends, however, since I have a well-known aversion to cooking.

Jillian and Linc share a very painful past that, at times, seems insurmountable. Did you know how the book was going to end when you began it?

I vaguely had an idea of how the book would end when I started writing the book. I don’t like to have everything mapped out in my mind before I write because that would be a bit like reading the end of a book first. The idea for the ending didn’t come to me until I was halfway through writing the book. I knew what would happen to Lauren, but I didn’t know who or why until that point. I also wasn’t sure how Jillian’s issues with her parents would be resolved until the final rewrite of the manuscript.

What do you consider important themes or motifs in The Color of Light?

I always come up with the book title before I start writing a book because once I have it, I know what the book is about. In The Color of Light, I wanted to show how two very damaged people could learn to overcome their pasts by finding whatever it is that lies inside of them that will give them the strength to go on. I’ve defined this internal fire as light. It can be a combination of things—the love of family, faith in God, the gift of creating things, a low country marsh. It’s what stirs the soul. In the same way a stained glass window can create a kaleidoscope of colors, so too do the small combination of things bring light to a person’s life.

You describe the South Carolina low country beautifully, and in such vivid detail. Is this a place close to your heart? Did you spend part of your childhood there, like Jillian?

I had never been to the low country until about eight years ago. I had always been fascinated by stories and pictures and movies and recognized a pull toward the area for many, many years. On my first visit I can honestly say that I felt as if I had come home. There is something about the Spanish moss and the smell of the marsh that steals your heart. Each summer now, I pick a different South Carolina island and rent a house for a week with my family and I look forward all year to those visits. It was inevitable that I would use the low country for a setting for a book and I plan to do it again.

In The Color of Light, the main characters end up forming a less-than-traditional family by the end of the book. What components of family are most important to you? Are there any problems inherent in writing about family?

Unconditional love is the most important component of family to me. Regardless of how many mistakes a parent can make, everything will be okay as long as the child understands that they are loved no matter what. Jillian was such an ambivalent mother at first—but she never let Gracie know. I loved watching Jillian learn how to love both of her children. It was never a question about if—it was always about how much.

I come from a very traditional family and it’s what I usually tend to write about because it’s what I know. This book was a bit of a departure for me and I’ll admit to a little bit of trepidation as I pictured my parents reading over my shoulder as I typed. But in the end, I realize there’s very little difference between my own family and my fictional family. Where there is unconditional love, there is family.

Who are your favorite authors? Is there anyone who is particularly influential?

My two favorite authors are Margaret Mitchell and Diana Gabaldon. Their storytelling and characters are unmatched. Their books came alive for me, allowing me as a reader to be completely immersed. I strive to do the same for my readers with each book I write.

For wonderful southern voices, I turn to Harper Lee, Olive Ann Burns and Pat Conroy. Their writing can make me taste sun-warmed watermelon and feel the cracked summer asphalt under bare feet.

When did you realize that you wanted to be a writer, and when did you begin writing?

My 6th grade teacher, Mrs. Anderson, told me I should be a writer and I wanted to believe her. I’d been a huge reader ever since I learned how to read and I thought it would be fun to be a writer. But all through school, I’d always received bad marks on writing assignments due to a nearly illegible handwriting. I hated to write because of it; each word was torture and I usually ended up writing really large so I could fill a page quickly. I would either write the shortest story possible or just abruptly end it when the page ran out. It wasn’t until I learned to type in 10th grade that a whole new world opened for me. I began to enjoy writing assignments for the first time and was encouraged by many of my teachers to write. But, life got in the way. I was a business major in college, got married, and then worked in the business world until I had my first child.

I didn’t actually sit down to write my first book until I’d been out of college for eight years. I simply sat down one day and started writing. I found out that writing a book is a lot like having children—there’s never a perfect time for either. You just do it.

What is the most difficult aspect of writing, for you? What is the most rewarding? Do you have any quirky habits that you indulge when you write? Writing the first three chapters of a book is a bit like licking glass. It’s very painful. It’s like going to a family reunion where you don’t know anybody but you’re expected to converse with a familiar knowledge. I usually have to rewrite the first three chapters once I hit chapter 10 or so because at that point I’m more familiar with my characters and I know how they should be acting/speaking and what sort of baggage they’re carrying.

My favorite part about the writing process (and I do have many) is hearing from fans. Hands down—there’s nothing better.

My most embarrassing quirky indulgence that helps me when I’m writing is usurping my son’s Game Cube and playing Pikmin. He’s more embarrassed about this than I am. But there’s something about attacking Bulborgs that really gets my creative juices flowing. Go figure.

I just finished a book entitled Stone Heart which is set in the North Georgia mountains. As with Jillian in The Color of Light, Caroline Collier is damaged and flawed but makes the most unbelievable journey to find her life again and to find forgiveness for a single event in her life that irrevocable changed it thirteen years before. There’s a few quirky characters and a mother-daughter relationship that will make any woman with a mother nod her head and say, “Oh, yes. That’s how it is.”

Do you have a recipe for those mouth-watering lemon bars that Jillian makes? Yes—here it is:

Mix above ingredients and pour over first mixture. Bake 20-30 minutes at 350, or until solid. Cool then dust with powdered sugar and cut into squares.

Learn More About The Color of Light
print

The Christmas Spirits on Tradd Street

Whistling in the Dark
Back to Top