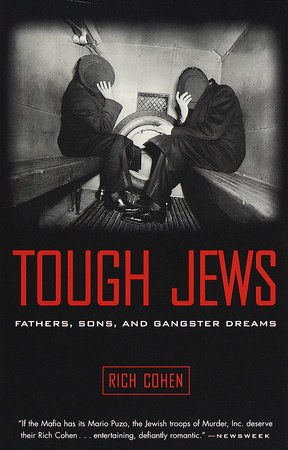 "If the Mafia has its Mario Puzo, the Jewish troops of Murder, Inc. deserve their Rich Cohen . . . entertaining, defiantly romantic." —Newsweek

The questions, discussion topics, and author biography that follow are intended to enhance your group’s reading of Rich Cohen’s Tough Jews, a richly anecdotal cultural history of the Jewish gangsters who thrived in New York in the first few decades of the twentieth-century.

Tough Jews is not only a cultural history of the Jewish gangsters who thrived in New York in the first few decades of the twentieth-century, but also the story of the gangsters’ effect on the imaginations of young Jewish kids living in New York City at the time–kids like Rich Cohen’s father, Herbie, his friend Larry Zeiger (now Larry King of television fame), and many others of their generation who in imitation of the gangsters gave each other outlandish nicknames–Mouth Piece, Who-Ha, Inky, Gutter Rat–while hanging out on Brooklyn street corners gossiping about Pittsburgh Phil Strauss, Buggsy Goldstein, and the other hit men of Murder, Inc. Tracing a generation of Jewish gangsters from the candy stores of Brownsville to the clubhouses of the Lower East Side–and, occasionally, to suites at the Waldorf–Tough Jews is a colorfully detailed and gruesomely funny history of muscle, moxie, and money.

1. Cohen’s story "is really just the story of three generations: the gangster generation, that handful of early century Jews who tried to bust into the palace with a crowbar; my father’s generation, diligent sons who carried us over the threshold with hard work; my generation, cool-thinking suburbanites who wonder what it was like back on the outside" [p. 20]. How important is the element of family memoir in Tough Jews? How prevalent in middle-class families is this sense that romance and excitement decline as the family becomes more economically and socially established?

2. The story of Arnold Rothstein is that of a ruthless and successful mobster building an empire. But, as Cohen makes clear, it is also the tragedy of a father disappointed by a wayward son, and of a son who feels the pain of his father’s disapproval. What is most compelling about Rothstein’s story? How does it fit in the larger context of Cohen’s narrative?

3. On page 55 Cohen discusses the centrality of immigrant experience to the rise of the American gangster and argues that, to some extent, the Jews, the Italians, and the Irish who became gangsters were simply pursuing some of the possibilities of the American opportunism? How accurate is Cohen’s view of the American ethos of self-interest?

4. Clearly, Cohen tends to romanticize the lives and legacy of the Jewish gangsters. Yet he also argues that the gangsters are a welcome relief from the stereotype of Jews as "cerebral bourgeouis kids-to-college suburbanites" [p. 258]. How much truth is there to Cohen’s statement that, "If Jewish gangsters still thrived today, if they hadn’t gone legit, if Jews of my generation didn’t regard them as figments, creatures to be classed with Big Foot and the Loch Ness monster, I think the Jewish community might be better off" [p. 20]?

5. How is the current success of the television series "The Sopranos" related to Cohen’s nostalgia for the mobster years in Tough Jews? Why are people drawn to stories of gangsters? Does Cohen suggest that mobsters like Abe "Kid Twist" Reles, who ultimately turned himself in to appease his wife, are like normal middle-class husbands and fathers, only with a more lucrative and dangerous profession?

6. Cohen writes, "Even the most violent of the gangsters saw themselves as good Jews, people of the Book. They went to temple on High Holy Days, thought of God when things went bad, had their sons circumcised and bar mitzvahed" [p. 153]. When asked by a lawyer if he believed in God when he was doing various killings, Reles responded that he did, but "that was my profession" [p. 153]. How is Reles, and other gangsters like him, able to reconcile his faith with his chosen "occupation"? What does his attitude suggest about the Jews’ attitudes toward their lives?

7. Cohen’s description of the killing of Pretty Amberg [pp. 121-22] shows the cruel and desperate side of the mob’s way of life. Does such an act of violence (which includes the presence of the women at the final scene) have a ritual function in the gangster’s code of behavior? What is most striking, or most revolting, about the violent killings Cohen describes here and elsewhere in the book?

8. "I don’t want to glamorize what these men did," Cohen writes, "yet I cannot help but admire some part of their story. Here were men who had no idea Jews are supposed to be weak, so they weren’t" [pp. 99-100]. What role did Cohen’s father play in promoting his son’s lifelong fascination with tough Jews? For the current generation of children–Jewish and non-Jewish–growing up in America, is the stereotype of Jewish weakness still prevalent? If so, how does it affect them today?

For discussion of THE AVENGERS and TOUGH JEWS:

1."I’ve taken it upon myself, though not with any real plan, to challenge stereotypes of Jewish history," Rich Cohen has said. "One is the idea of Jews as passive objects of history and the other is Jews as victims. . . . The Avengers was a natural outgrowth of the first book, part of the same project, which was to look back and tell history with the breadth with which it was lived. These weren’t Jews that were saved when somebody else was saving the Jews, although those people are in my book too. These were Jews who saved themselves." What do Rich Cohen’s two books have in common, and do they reflect their author’s effort to challenge popular stereotypes? How, in each case, does he fulfill his desire to "tell history with the breadth with which it was lived"?

2. Cohen points out that several of the Jewish gangsters were strongly anti-Nazi during the war, and that Bugsy Siegel might have been involved in an assassination attempt against Goering and Goebbels. The gangsters "understood Nazis in a way most law-abiding adults could not" [p. 189]. Are there similar qualities of toughness–or a refusal to be bullied–in the protagonists of his two books? Why do some brave and nonconformist people become criminals, while others become heroes?

Rich Cohen has written for The New Yorker and The New York Times Magazine, Harper’s, and GQ, among many other publications. He is a contributing editor at Rolling Stone. Cohen is also the author of Lake Effect. He lives in New York City.

The War Against the Jews
Lucy S. Dawidowicz

Into That Darkness
Gitta Sereny

A Life in Secrets
Sarah Helm

Slightly Out of Focus
Robert Capa

The Anatomy of the Nuremberg Trials
Telford Taylor

Who Will Write Our History?
Samuel D. Kassow

Sin in the Second City
Karen Abbott
Back to Top