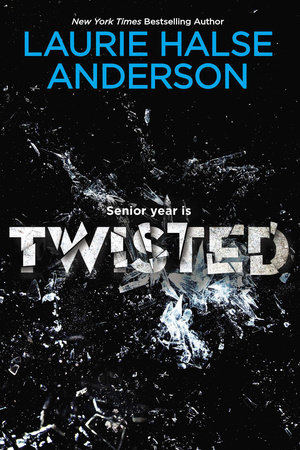 High school senior Tyler Miller used to be the kind of guy who faded into the background—average student, average looks, average dysfunctional family. But since he got busted for doing graffiti on the school, and spent the summer doing outdoor work to pay for it, he stands out like you wouldn’t believe. His new physique attracts the attention of queen bee Bethany Milbury, who just so happens to be his father’s boss’s daughter, the sister of his biggest enemy—and Tyler’s secret crush. And that sets off a string of events and changes that have Tyler questioning his place in the school, in his family, and in the world. In Twisted, the acclaimed Laurie Halse Anderson tackles a very controversial subject: what it means to be a man today. Fans and new readers alike will be captured by Tyler’s pitchperfect, funny voice, the surprising narrative arc, and the thoughtful moral dilemmas that are at the heart of all of the author’s award-winning, widely read work.

Laurie Halse Anderson was born in Potsdam, a cold place in northern New York State where as a little girl, she pounded away at her father’s old typewriter for hours, writing newspaper columns, stories, and letters. She never intended to be an author. At Georgetown University, she majored in foreign languages and linguistics. Laurie hit the real world with no idea of what kind of work she wanted to do. She tried everything, including cleaning banks, milking cows, and working as a stockbroker. Being a reporter for the Philadelphia Inquirer was a slight improvement, but she eventually quit to write books. Her first novel, Speak, was a National Book Award Finalist, a Michael L. Printz Honor Book, a New York Times Bestseller, and an American Library Association Best Book for Young Adults. Laurie currently lives with her family in Mexico, New York. To find out more about Laurie, visit her website at www.writerlady.com.

Beneath a Meth Moon
Jacqueline Woodson

The Face on the Milk Carton
Caroline B. Cooney

The Schwa was Here
Neal Shusterman

The Rules of Survival
Nancy Werlin

If You Come Softly
Jacqueline Woodson

The Voice on the Radio
Caroline B. Cooney

The Smell of Other People’s Houses
Bonnie-Sue Hitchcock

What Janie Found
Caroline B. Cooney

The Year of My Miraculous Reappearance
Catherine Ryan Hyde

Exit, Pursued by a Bear
E.K. Johnston
Back to Top