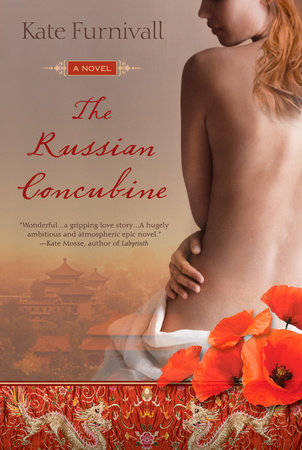 At once a sweeping epic love story and a stunning literary debut, The Russian Concubine describes the lives of two generations of women, both struggling against their destiny. Valentina Ivanova, formerly counted among Russia’s elite, watched as the Bolsheviks captured her husband. Able to purchase the life of her young daughter Lydia, Valentina takes her to Northern China, to the whites-only International Settlement, where, as a lounge piano player, she struggles to make ends meet in the only way she knows how… Now a teenager and possessed of a fierce spirit and wild independence, Lydia Ivanova meets the young Communist Chang An Lo after he saves her life, and falls in love with all of the passion in her young soul. With their relationship comes danger, from both sides of the political struggle, but both are powerless to end it.

“I read it in one sitting! Not only a gripping love story, but a novel which captures the sights, smells, hopes and desires of Russia at the dawn of the 20th century, and pre-Revolutionary China, so skillfully that readers will feel they are there.” —Kate Mosse

“The wonderfully drawn and all-too-human characters struggle to survive in a world of danger and bewildering change…caught between cultures, ideologies—and the growing realization that only the frail reed of love is strong enough to withstand the destroying winds of time.” —Diana Gabaldon

Kate Furnivall was born in Wales and currently lives in Devon, England. Married and the mother of two sons, she has worked in publishing and television advertising. She drew inspiration for The Russian Concubinefrom her mother’s experiences as a White Russian refugee in China.

Waiting for Eden
Elliot Ackerman
Back to Top