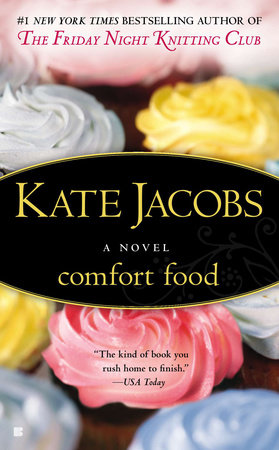 INTRODUCTION
Cooking with Gusto! TV personality Augusta “Gus” Simpson is the woman most women spend their lives trying to be—graceful, immaculately dressed, and most of all, an entertainer extraordinaire. From backyard barbecues to simple scones and tea, Gus has just the plan—and the recipe—to bring together her tight-knit group of family and friends. But as she prepares to hit the big 5-0, she realizes that she’s tired of being the hostess, the mother hen, the one who can whip up the perfect chocolate soufflé without getting so much as a spot on her silk blouse. To make things worse, the network execs at the CookingChannel decide to boost ratings by pairing Gus with the beautiful, though conniving, Carmen Vega, a former Miss Spain who’s made her name as the new hottie of the foodie world.

Instead of throwing in the dishtowel, Gus decides that, for the first time in too many years, she’s going to take a risk—and she’s not afraid to make a mess. Instead of the usual cool and calm of her old show, Gus throws together an on-air cooking class where anything goes. To add a dash of spice, the new cast includes her warring daughters, happygo- lucky Sabrina and somber Aimee; Troy, Sabrina’s ex-boyfriend; and Hannah, Gus’s reclusive neighbor. In addition to family drama, Gus has to worry not only about Carmen’s diva antics but also about her new culinary producer, Oliver, a handsome ex-banker whom Gus can’t decide if she loves or hates.

Somewhere between the pursuit of higher ratings and culinary delights, Gus realizes that this cooking show is shaking things up way more than she anticipated, and not just in her professional life.

Kate Jacobs is a writer and editor who divides her time between New York and Los Angeles. A former staffer at Redbook, Working Woman, and Family Life, she is now a freelance editor at the website for Lifetime Television. The Friday Night Knitting Club is her first novel.

More Than You Know
Penny Vincenzi

Jane Austen Made Me Do It
Janet Mullany, Adriana Trigiani, Margaret Sullivan and Jo Beverley

The Interruption of Everything
Terry McMillan

The Next Thing on My List
Jill Smolinski
Back to Top