The Other Life Reader’s Guide 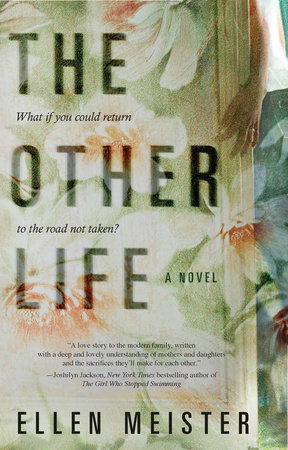 The Other Life Reader’s Guide

print
The Other Life Reader’s Guide

Happily married and pregnant, Quinn Braverman has an ominous secret. Every time she makes a major life decision, she knows an alternate reality exists in which she made the opposite choice—not only that, she knows how to cross over. But even in her darkest moments—like her mother’s suicide—Quinn hasn’t been tempted to slip through… until she receives devastating news about the baby she’s carrying.

The grief lures her to peek across the portal, and before she knows it she’s in the midst of the other life: the life in which she married another man, and is childless. The life in which her mother is still very much alive.

Quinn is forced to make a heartbreaking choice. Will she stay with the family she loves and her severely disabled child? Or will an easier life—and the primal need to be with her mother—win out?

Ellen Meister lives on Long Island with her husband and three children.

Q. What inspired you to write The Other Life?

I’ve always been intrigued by the idea of escape. I guess that’s part of the job description for a fiction writer. I was thinking about that one day after my husband left for work and the children left for school. There I was, all by myself, waiting impatiently for my computer to boot up so I could lose myself in the world I had created, when I began to wonder what might happen if a wife and mother could use those magical hours alone to escape in a more literal sense.

At once, I had the image of a portal right smack in the middle of the most domestic setting… an opening that would let the woman cross over to the life she would have had if she had chosen a very different path.

The more I thought about this idea, the more excited I got. As details about my main character and her two lives emerged, a story began to form. But it wasn’t until it occurred to me that my protagonist’s mother was dead in one life and alive in the other that I knew I had a book.

Q. The Other Life is about returning to the road not taken and exploring the life unlived. Have you ever longed to see what happened on the other road?

Haven’t we all? I think that’s human nature, especially in times of extreme stress. We play the “if only” game, imagining what might have been. What if I hadn’t gotten married? What if we hadn’t bought this house? What if we never had a child? What if I had been there to prevent that accident/suicide/awful mistake?

Of course, it’s easy to condemn this line of thinking as counterproductive, but I believe it’s a coping mechanism. There’s only so much grief and anxiety our minds can hold before we need a mental vacation.

Q. In this story Nan makes the ultimate sacrifice for a child, in this case her daughter, Quinn, and her grandchildren. Do you think that kind of love is instinctual or learned?

I think we’re hardwired to make sacrifices for our children. It’s the basest human instinct, and it gets switched on like a spotlight when we have our first child. I guess scientists can explain the chemistry of it, but from a personal perspective, falling in love with my first child was the most dramatically transformative moment of my life. I was flooded with something that seemed to alter my DNA, restructuring every cell. I was no longer just Ellen, I was Max’s mom, and I knew from that moment on every decision I made in life would be informed by that simple fact.

Q. With Nan and Quinn, you brilliantly capture the mother-daughter relationship and the bond that hovers between boundless love and bruising tension. Did you draw from personal experience?

Thanks for that compliment! I can honestly say that my own even-tempered mother is nothing like Nan, but I’ve always been fascinated by the wrenching emotional turmoil of family relationships. I’m not sure there’s anything more interesting—or more human—than the ways in which we are tested by love.

Q. As her daughter straddles parallel universes, Nan wonders whether having an escape route will help Quinn manage life’s difficulties with more grace, or instead taunt her with a decision no one should ever have to make. Is it a blessing or a curse… or something else?

Q. In musing about her mother, Quinn observes: “Sometimes we don’t just simply grow and change. Sometimes life is so harsh and so dark, a part of us gets excised completely, leaving us permanently altered.” It happened to Nan, but what is it about Quinn that keeps her from the same fate?

Quinn lives very much outside of herself. She’s introspective, sure, but she’s a giver and feels like her place in the world (or, in her case, worlds) is to take care of others. She’s so acutely aware of being needed that it’s very nearly impossible for her to make the kind of choice her mother did in her darkest hour. To Quinn, suicide is the ultimate act of selfishness.

Q. The Other Life probes the choices we make in life. Do you think there’s a way to avoid the second-guessing that often accompanies them?

No, and I don’t think we should. That constant reexamination of our motives and choices is how we learn and grow. It’s like what Socrates said about the unexamined life.

Q. Grief comes in many forms in this novel. Are there lessons here for those stuck in grief?

Grief is such a bear and so very personal. So I don’t know if there are any lessons here, but perhaps some comfort in taking the journey with someone finding her way through it.

Q. The Other Life has been called “the thinking woman’s beach read” (NY Times bestselling author Joshilyn Jackson), making it perfect for a book club selection. What feedback do you get from book clubs?

From my experience, book clubs enjoy novels with fresh writing, complex characters and enough emotional resonance to leave readers with questions that feel very personal. Naturally, I hope The Other Life is all those things… and I’m thrilled that the early feedback I’m getting from beta readers suggests that it is!

Q. What genres (or authors) do you like to read? Why?

I don’t limit myself to any particular genre, but I’m definitely drawn to character-driven stories that take a hard look at human relationships. So a survey of my book shelf would probably reveal more literary and women’s fiction than anything else.

Q. Modern women yearn for balance between work and family. As a writer and mother of three, do you have any advice for them?

For me, it’s a matter of priorities that boils down to a simple equation: Family = first; Work = second; Housework = dead last.


Learn More About The Other Life
print

The House of Memories
Monica McInerney

The Ones Who Matter Most
Rachael Herron

A Place for Us
Liza Gyllenhaal

No One You Know
Michelle Richmond

Four of a Kind
Valerie Frankel

The House at Midnight
Lucie Whitehouse

Odd One Out
Monica McInerney

Pack Up the Moon
Rachael Herron