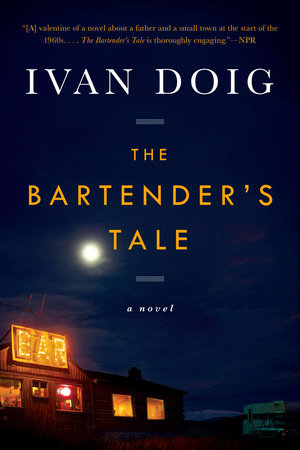 Tom Harry has a streak of frost in his black pompadour and a venerable bar called The Medicine Lodge, the chief watering hole and last refuge in the town of Gros Ventre, in northern Montana. Tom also has a son named Rusty, an “accident between the sheets” whose mother deserted them both years ago. The pair make an odd kind of family, with the bar their true home, but they manage just fine.

Until the summer of 1960, that is, when Rusty turns twelve. Change arrives with gale force, in the person of Proxy, a taxi dancer Tom knew back when, and her beatnik daughter, Francine. Is Francine, as Proxy claims, the unsuspected legacy of her and Tom’s past? Without a doubt she is an unsettling gust of the future, upending every certainty in Rusty’s life and generating a mist of passion and pretense that seems to obscure everyone’s vision but his own. The Bartender’s Tale wonderfully captures how the world becomes bigger and the past becomes more complex in the last moments of childhood.

Ivan Doig was born in Montana and grew up along the Rocky Mountain Front, the dramatic landscape that has inspired much of his writing. A former ranch hand, newspaperman, and magazine editor, with a Ph.D. in history, Doig is the author of nine previous novels, most recently The Whistling Season and The Eleventh Man, and three works of nonfiction, including his classic first book, the memoir This House of Sky. He has been a National Book Award finalist and has received the Wallace Stegner Award, a Distinguished Achievement Award from the Western Literature Association, and multiple PNBA and MPBA Book Awards, among other honors. He lives in Seattle.

At the Edge of the Orchard
Tracy Chevalier

The Other Typist
Suzanne Rindell

The Twelve Lives of Samuel Hawley
Hannah Tinti
Back to Top