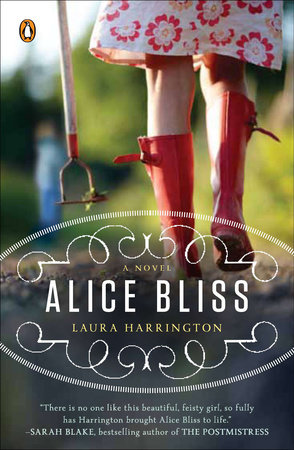 When his army reserve unit is deployed to Iraq, Matt Bliss leaves behind his daughters, Alice and Ellie, and his wife, Angie, to manage as best they can without him—a tall order, especially for teenage Alice, who adores her father. Laura Harrington’s debut novel Alice Bliss is the story of nearly a year in Alice’s life, as she balances the drama of adolescence with the effort of keeping her family together. The book is a tale of heartache, resilience, and hope in a time of challenge.

Angie, worried sick about Matt and the pressure of suddenly being a single parent, begins to crumble. It is up to Alice to fill the void left by both parents for not only herself but her quirky younger sister, Ellie. Although Alice often feels that no one understands what she’s going through, she discovers that when it counts, compassion comes from friends and neighbors, who reach out with comfort, advice, and encouragement. Harrington addresses a timely and difficult topic with grace, sympathy, and humor, and she has captured the variety and authenticity of the small-town American experience.

Harrington’s portrait of Alice captures the experience of a young woman struggling to hold it together when things feel like they’re falling apart. Alice is alternately vulnerable and strong, proud and awkward. The novel is an honest reflection of the conflicting nature of adolescence, compounded by the absence of a beloved father. Alice tries to give her dad the details of the everyday family life he misses so much, but she finds their rare phone conversations forced and frustrating. Then, not long after Matt’s departure, the Bliss family gets a knock on the door that will draw them even further from their former lives and push them toward an uncertain future.

Laura Harrington is a playwright, lyricist, and librettist whose work has been produced in the United Sates, Canada, and abroad. She teaches playwriting at MIT and has won numerous awards, including the 2008 Kleban Award and the 2009 MIT Levitan Award for Excellence in Teaching. She currently lives in Gloucester, Massachusetts. This is her first novel.

A CONVERSATION WITH LAURA HARRINGTON

Q. You provide a detailed and nuanced description of what it’s like to live with the absence of a family member during a time of war. How might your personal experiences be similar to Alice’s?

I was thirteen when my two brothers enlisted in the air force, one just out of high school, one just out of college. I went from being part of a raucous family to an only child overnight. My parents, who had gone through World War II, believing it was the war to end all wars, were heartbroken. At the same time I remember the dinner table conversations before my brothers enlisted where my parents would say, “If you don’t go, someone else will have to go in your place.”

Those four years were a very dark and confusing time, personally, politically, for the nation. One of my brothers went to Vietnam, one worked stateside with NORAD; they both came home again. But of course they were not the same boys who left, and our family was never the same again. My mother would also say about my father, “The fellow who went to war didn’t come home.”

Q. As a successful playwright and librettist, what drew you to fiction, and how does it compare to your other art forms?

I was drawn to fiction because I wanted to be a beginner again, I wanted to do something I didn’t know how to do, and I wanted to reconnect to the creative process by turning my writing world upside down.

How does it compare? At first fiction seemed like an utterly alien, strange new world. I would sit down to write every day and think, “How do you do this?” Finding my way forward into the novel also meant reaching back into my theater tool kit. And here’s my favorite part about writing fiction: the good part, the fun part, lasts longer. A play or a musical is ninety to one hundred pages, double-spaced, with lots of white space on every page. A libretto for a full-length opera might be half that long. These are condensed, compressed mediums, more closely aligned to poetry than fiction. So the creative burst—the fun part of writing intensely—lasts for weeks, maybe a few months; certainly not the year or longer of a novel. Getting to live inside my characters and their story so deeply with Alice Bliss was a huge pleasure.

Q. What was the genesis of Alice Bliss?

Alice Bliss was inspired by the one-woman musical, Alice Unwrapped, I wrote with the composer Jenny Giering. At thirty minutes and almost entirely sung, we could really only dramatize one key moment in Alice’s life. And I realized that there was a much larger story to be told. Which is when I decided I wanted to write a book.

Q. What has the reaction been to the novel so far?

Readers’ reactions so far have been extraordinary. They make me blush.

Q. You make a brief reference to Lewis Carroll’s Alice in Wonderland—”curiouser and curiouser” (p. 116)—and I’m wondering what other similarities you see between the two young women. Your Alice does go through a rabbit hole of sorts, into a very different world than she previously lived in. Is there a certain absurdity to grief and the limbo of waiting and hoping in which Alice exists?

What an interesting question! I guess you can never call a girl Alice without invoking “the” Alice. Maybe I was thinking about the Orwellian absurdities of doublespeak that occur the minute we go to war. Or that Alice exists in a world within a world. The world of her family has suddenly been turned upside down. Her dad is gone, her mom is heartbroken, everybody’s worried sick, Alice suddenly needs to grow up fast and help her mom. And at the same time, the world outside her family has not changed one whit; when she walks out her door, Alice lives among friends and classmates who have no idea what she and her family are going through. I think families of reservists can feel especially isolated. Not living on base means that they are not surrounded with other families going through the same thing. How does Alice negotiate those two worlds?

Q. Some might find Angie a difficult character. While her struggle with loneliness and grief generates intense sympathy, readers might also be frustrated by her neglect of some of her responsibilities as a mother. What are your feelings toward Angie?

I love Angie. I love the way she loves her family, the way she is still in love with Matt, the honesty and depth of her grief and longing. And I love her for struggling and failing and making mistakes. I have a soft spot for flawed characters; I feel you don’t love someone in spite of their flaws but because of them. I also wanted to write a realistic portrait of a mother-daughter relationship when the daughter is a teenager.

Alice is terrifically well drawn. You present some of the confounding aspects of adolescent behavior with kindness and honesty, but you never condescend to her or make her simplistic—a flaw of many teens in fiction. How did you approach your depiction of Alice?

I listened to her. And I pushed her. And I let her make her own mistakes.

Q. How did she change over the course of your writing?

She grew, she deepened, she started to take chances. She found her courage. She didn’t harden her heart, which is one of the things I admire most about her.

Q. Angie considers the night sky and Matt’s letter to her describing the moon in the desert. She thinks to herself, “My soul lifts up” (p. 100) but although the quotation is familiar to her, she can’t place it. Where does the phrase come from?

It’s a fairly common phrase, found in scripture, a variation of it is in the Book of Common Prayer, and it seems to be frequently used in poetry.

Q. Reading over the letter of advice that Matt gives to Alice (p. 297), it’s an excellent summary of common sense and consideration. What advice did your parents give you when you were young? Did it prove useful?

My life is deeply informed by both of my parents and their values. My father’s spirit, in particular, informs almost every page ofAlice Bliss. They might not have articulated the advice Matt did, but they lived it.

Q. What projects—musical and literary—are you currently working on? How many projects do you have in progress at one time?

I concentrate on one thing at a time but often have a few projects in various stages of development. I’m working on another novel at the moment, A Catalogue of Birds. My theater work continues to be fun and engaging. I have musicals and operas scheduled in Minneapolis, Maryland, New York City, and Korea.

Asa, as I Knew Him
Susanna Kaysen

The Mermaid’s Child
Jo Baker
Back to Top