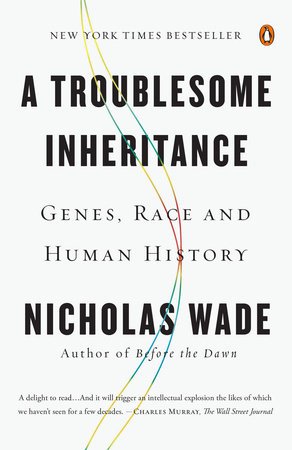 Nicholas Wade understands that race is a touchy subject. Yet, as a journalist and author committed to reporting on the latest scientific findings, Wade believes society’s collective refusal to acknowledge potential racial differences can no longer stand. Just as the findings of science must not be used to falsely establish one race’s superiority over another’s, he argues that they must not be tailored to suit the requirements of political correctness.

Up until about a century ago, the existence of different races was accepted as a given. From the ancient Greeks to the click-speaking bushmen of the Kalahari Desert, the inhabitants of various regions divided humanity into two groups: those who were like them and those who were not. Today, social scientists promulgate the idea that, “Race is about culture, not biology” (p. 5). Science—most recently the mapping of the human genome—questions the validity of this thinking.

Darwin demonstrated that evolution is an ongoing process. Humans are no different from other forms of life, so it would be erroneous to assume that human evolution ended when “the first modern humans dispersed from their ancestral homeland in northeast Africa some 50,000 years ago” (p. 1–2).

Genetic studies have explained why lactose intolerance is more prevalent in certain populations and how a potentially lethal recessive gene for sickle-cell anemia endures because of the protection it provides against the more common threat of malaria. As humans spread out across the world, “the evolutionary pressures for change on these small isolated groups would have been intense” (p. 77). Only minor genetic mutations like these enabled geographically diverse populations to survive.

If certain physiological traits can be traced back to our DNA, could the same be said for behavioral traits? Wade says yes. In one notable study of “a Dutch family in which the men were inclined to violently deviant behavior,” researchers discovered that their aggression was linked to “an unusual form of the MAO-A gene” (p. 55). Subsequent research revealed a quantifiable relationship between MAO-A and instances of serious delinquency in both men and women.

Wade explains, “social behavior changes because, over a period of generations, genes and culture interact” (p. 59). Humans who carried genes that thrived in a particular culture were more successful at surviving and reproducing. If a major shift altered that culture, genes with more beneficial allele frequencies would naturally rise to dominate or replace those less suited to their new environment.

For example, when hunter-gather societies transitioned into agrarian communities, “the aggressive and independent nature of hunter-gatherers . . .  had to yield to a more sociable temperament and the ability to interact peaceably with larger numbers of people” (p. 62). Similarly, as early tribal societies gave way to autocracies in Asia and open societies in Europe, those peoples evolved behaviors that would enhance the odds of survival within their respective cultures.

As science further decodes the information long-hidden in our DNA, Wade boldly encourages readers to embrace its findings. Only by accepting the truth about the troublesome inheritance of our biological differences can humanity build upon its discoveries and move unequivocally forward.

1. Do you agree with Wade’s theories about race and social behavior? What aspects of his arguments did you find the most convincing? Most troubling?

2. Despite the fact that it bears his name, Charles Darwin did not believe in Social Darwinism, the theory that in human societies “just as in nature the fittest survived and the weak are pushed to the wall” (p. 24). He instead believed that “the aid we feel impelled to give to the helpless is part of our social instincts” (p. 25). Why then does the idea of Social Darwinism still hold so much traction today?

3. During the first half of the twentieth century, the eugenics movement gained strength in both America and Europe. If Hitler had not decided to replace “sterilization with mass murder” (p. 37) do you think some societies would have continued with the enforced sterilization of those it deemed unfit to reproduce?

4. Studies have shown that oxytocin administered to men “dampens down the distrust usually felt toward strangers and promotes feelings of solidarity. . . .  (The same is doubtless true of women too but most such experiments are performed only in men because of the risk that oxytocin might make a woman miscarry if she were unknowingly pregnant)” (p. 51). Based on Wade’s arguments, why might a surge of oxytocin be socially disadvantageous for women, but not for men? Why or why not?

5. Economic historian Gregory Clark “documented four behaviors that steadily changed in the English population between 1200 and 1800. . . . Interpersonal violence, literacy, the propensity to save, and the propensity to work” (p. 156). Do you agree with Wade that these are accurate signifiers of a genetic shift in the population?

6. Wade writes, “Intelligence is almost certainly under genetic influence but none of the responsible alleles has yet been identified with any certainty, probably because each makes too minute a contribution to show up with present methods” (p. 190). Do you think further research should be done to uncover the genetic roots of intelligence?

7. “Africa and much of the Middle East remain largely tribal societies” (p. 173). Does one region appear to have a greater chance than the other of escaping tribalism’s grip? If so, which one, and why?

8. “If inclusive institutions are the only thing that matters in achieving prosperity, it follows that foreign aid is useless unless it begins with institutional reform” (p. 195). Discuss an instance in which the truth of this statement is borne out.

9. In his chapter “Jewish Adaptations,” Wade points out, “Jews constitute 0.2% of the world’s population, but won 14% of Nobel Prizes in the first half of the 20th century, despite social discrimination and the Holocaust, and 29% in the second. As of 2007, Jews had won an amazing 32% of Nobel Prizes awarded in the 21st century” (p. 198). Aside from Wade’s thesis, how else might the Jewish peoples’ disproportionate success be explained?

10. How might the increased rates of birth control and abortion in developed countries eventually affect the social behavior of those countries’ citizens?

11. Have you read Jared Diamond’s Guns, Germs, and Steel? If so, compare Diamond’s ideas with Wade’s interpretation of how western European nations rose to become the world’s socioeconomic powerhouses. Were you aware of the flaws in Diamond’s arguments when you first read his book?

12. Are there cultural traits that Wade does not discuss that you suspect might have a genetic basis? Which ones, and why?

Nicholas Wade is a journalist and author, concentrating on issues of biology, particularly human evolution. He was the deputy editor of Nature magazine before joining Science magazine and later the New York Times. His previous books include Before the Dawn and The Faith Instinct.
Learn More About A Troublesome Inheritance
print
Back to Top