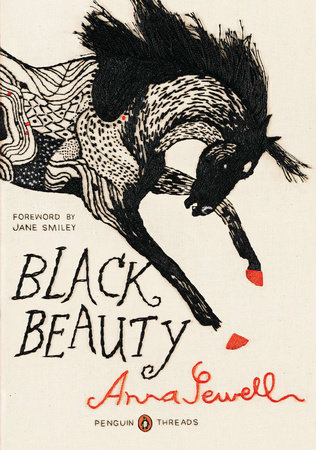 INTRODUCTION
“I hope you will fall into good hands; but a horse never knows who may buy him, or who may drive him; it is all a chance for us, but still I say, do your best, wherever it is, and keep up your good name” (p. 13).

Few writers make the kind of lasting mark that Anna Sewell achieved when she published Black Beauty in 1877. Although the first-time author died shortly after its publication, she lived long enough to see it become an immediate sensation. The novel sold a staggering five million copies and permanently altered both the laws and public consciousness regarding the ethical treatment of horses.

Written in autobiographical form, Black Beauty begins with a yet-to-be-named young colt sharing his earliest memories of life. “Whilst I was young I lived upon my mother’s milk, as I could not eat grass” (p. 3). The colt’s early years are quiet and idyllic. However, the reader bears witness to the colt’s dawning awareness of the greater world and its troubling complexities.

During this time, a peaceful morning is shattered by the sounds of dogs and galloping horses. In his ignorance, the colt is captivated by the excitement of the passing hunt until two horses stumble and the sport takes a brutal and tragic turn for animal and human alike.

Tranquility returns to the meadow, but our narrator’s days within it are numbered. At four years old, he is now ready to be broken in and trained for a working life.

His master is a kind man who gradually introduces the young horse to the steel bit he must wear in his mouth, the iron shoes that will be nailed onto his feet, and the saddle and harness he will need to ferry humans. Though it all feels strange and uncomfortable at first, he recollects how “in time I got used to everything” (p. 12).

No sooner is he trained than the young horse is taken to Birtwick Park, the estate of his new master, Squire Gordon. Life is good there, and he is named Black Beauty for his coloring and handsome looks. The coachman, John Manly, is kind to his equine charges, including Ginger, a wary and high-spirited mare who warms to the newcomer. As the two become friends, Ginger tells Black Beauty how early ill treatment caused her to regard men as her “natural enemies” (p. 30).

Both Black Beauty and Ginger thrive at Birtwick, but the tides of fortune are about to change. When Squire Gordon’s wife is ordered abroad for her health, the household and stables are broken up and Black Beauty must again embark on a new life alone.

As his circumstances and name change over the ensuing years, Black Beauty journeys from the country to the city and back again, encountering the full range of human evils—foolishness, cruelty, drunkenness, and greed—as well as havens of goodness.

Today, Black Beauty is often relegated to young readers’ shelves, but its lessons are still universal. In relating the story of his life, Black Beauty illuminates how we are all—man and beast—at the whim of circumstance, yet “if we see cruelty or wrong that we have the power to stop, and do nothing, we make ourselves sharers in the guilt” (p. 156).

Anna Mary Sewell (1820 – 1878) was born in Great Yarmouth, Norfolk, England. At age fourteen, she slipped while walking home from school and severely injured both of her ankles. Sewell remained disabled for the rest of her life, most likely due to mistreatment of her injuries, and could not walk or stand without a crutch. Her need for horse-drawn carriages and her constant close proximity to horses led to her increased awareness and concern for their humane treatment. She wrote Black Beauty from 1871 to 1877 amid declining health and died five months after her only novel’s publication.

Idylls of the King
Alfred Tennyson

Legends and Tales of the American West
Richard Erdoes

The Story of King Arthur and His Knights
Howard Pyle