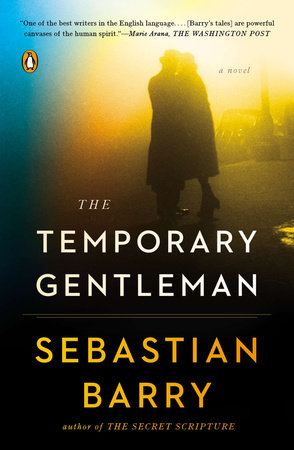 Jack McNulty’s story begins in the middle. It’s World War II, and the native Irishman is en route to Africa aboard a British troop ship when a torpedo destroys it. Jack miraculously survives, buffered from the shock by the “bottle of Scotch whisky” (p. 3) in his belly. From there, The Temporary Gentleman spirals back to Jack’s early years with the beautiful Mai Kirwan and forward to his solitary future in a free Ghana.

Why Jack returns to Ghana—or the Gold Coast, as it was called under British rule—he cannot say. It’s 1957, and his days as a soldier, engineer, and UN observer are behind him. Jack tells himself, “I will go back to Ireland, I must, I must, I have duties there, not least to my children” (p. 13). But first he is compelled to write an account of his troubled life with Mai.

In 1922, Jack is a shy engineering student from working class Sligo. Elegant and outspoken, Mai comes from a prominent Galway family. She and “her friends were the new girls of the century, who had come into the university on fearless feet” (p. 14). Jack is instantly smitten, but fears that he is reaching above his station.

Much to his surprise, Mai returns his regard and decides that Jack must meet her parents. Mai never drank alcohol herself, but Jack makes two stops along the way, so he can take “the questioning of her father more or less under the anaesthetic of four whiskies” (p. 47). It is clear to Jack that Mai’s father is not impressed, but Frank Kirwan keeps his opinions to himself—at least in the beginning.

When it is far too late to make a difference, Jack can see how Mai’s beauty and charisma masked some of her fault lines. On the day of their wedding, she flees the ceremony in tears. In time, Jack will discover that Mai is ill-equipped to manage the quotidian responsibilities of adulthood.

While writing his memoir in Ghana, Jack is cared for by a native servant named Tom Quaye. Tom is “exactly [Jack’s] age, down to the very month” (p. 17), and—like his employer—a veteran soldier who fought on the side of the British. Jack likes Tom and believes that his “houseboy” sincerely returns his affection.

Three years earlier and after four decades of heavy drinking, Jack had given up alcohol completely. “It just seemed the right thing to do” (p. 38). But when Tom invites him out to a local music club, a taste of palm wine sets off a night of wild revelry that will change the course of Jack’s life.

Acclaimed poet, playwright, and novelist twice short-listed for the Man Booker Prize, Sebastian Barry is widely acknowledged as one of the most masterful storytellers at work today. In The Temporary Gentleman, Barry offers an exquisitely multilayered tale that explores Jack and Mai’s doomed marriage as it plays out against the wider stage of British imperialism.

A CONVERSATION WITH SEBASTIAN BARRY

I probably learned to write from writing poems—rewriting, endlessly, endlessly. In my archive at the Harry Ransom Centre the evidence lies in boxes—the petty history of long, diligent, happy hours waiting for words to click into place. But were they true poems? I don’t know. Poetry is the highest art, in my view, but a prose writer can learn a lot from it—the precision, the clock-making aspect of it. I did write prose for a few years then and by 1986 had written a first play, a mad piece, forty-nine pages of monologue. But there was no plan really. Looking back, it was as if I were trying to construct stepping stones across the choppy waters of a life, and I used whatever materials came to hand. I suppose the driving force was survival!

I do prefer poetry ultimately, but not my own poetry—Michael Longley, the late Jack Gilbert, etc., all the modern greats. I miss Seamus Heaney walking through Dublin.

It would be odd to write every day, just as it would be odd to climb mountains all the time. I like to wait. It is part of the discipline. Wait for the whistle tune of a book, patiently, allowing the growing feeling of alarm and stupidity. Very important for me. For each book, I have usually written and finished about two chapters, working over and over them, maybe for half a year—and then the rest of the book might follow much more quickly. The full flow of a book is a fine time— the opposite obviously of waiting. I feel I may have “retired” from the theatre (possibly an illusion), so I am concentrating on novels now. Read for a year, write for a year, rewrite for a year.

They certainly do. Jack’s shadow man was my own maternal grandfather, with whom I shared a room as a boy. He had been all over the world by the time he was twenty. From the Khyber Pass to the port of Lagos. An inveterate storyteller, a widower still in love with his wife, though their marriage had been a nightmare. Of course I shouldn’t have known that, but my mother told us endless, obsessive stories about the horrors of her childhood—not in his hearing. I suppose a strange upbringing! But I loved them all, those people.

It’s a sad fact that most of it was much worse, or seems to me, now, much worse. There are many ways to tell the same story, thankfully, and I am mindful of the old dictum “a man can bear only so much reality.” But even if I skirt the volcanoes, I think you can still smell the sulphur—only too well. But a story is a story—laboratory conditions to test human experience, so that the reader is in that respect safe—and hopefully the writer.

Couldn’t be far off—as much of a problem, I mean. It seems to me at age fifty-eight that alcohol is as dangerous, as inescapable, as unpredictable, very occasionally as delightful, and oftentimes as murderous as religion in Ireland, yes; and all the more lethal for being both invisible and acceptable, all at the same time. But then it is also a great social drug, I understand that, and the Romans thought life would be insupportable without wine. Yet, the havoc, the havoc. But not, physically, for Jack—Mai has a different response to it. It is said that so-called indigenous people have no defenses against alcohol—but I think it is universal. It starts out as a great comfort for the afflicted maybe, but year by year, decade by decade, it exacts its price. Is it an Irish problem? Not so much, because English drinking is just the same. Is it a human problem? Is it worth the candle, as they say? A mystery—a dark and sometimes bright mystery.

No, but I think ladies thought gin was more dainty, maybe—better for their waistlines. I don’t know if it is. All drinking is shameful for Mai, because she knows her father would be heartbroken were he still alive. Drinking seems more shameful for Jack after he gives it up, and falls off the wagon.

Well, President De Valera kept us neutral in the war, because he was afraid of the political terror of the 1910s and 1920s returning into Irish life. Ireland was sick of all that. But twenty thousand men went and fought in the Allied forces—it had been two hundred thousand in the First [World] War, when we were still part of Britain. There was a blackout on information in Britain too, but in Ireland it was almost total. If you were in the British army, you couldn’t wear your uniform at home on furlough. It was possible in remote areas, where there would be poor communications anyway, to be unaware of the war. There was a feeling that the war meant little enough to Ireland—generally. A minority was horrified by that. It was called in Ireland “the Emergency” and was felt mostly as food shortages and rationing. A very strange time—and possibly strangely damaging to the national psyche for many years.

I think only in writing things down do we see the event properly—and in writing a life story, see ourselves properly—even for the first time. Meet ourselves, you might say, like Dante meets himself in Dante’s Wood.

I write to sing—it is my version of singing. Singing reveals the core of the singer, much quicker than talking. You could talk to a person for twenty years and not know them—then, one night, hear them sing, and all is revealed.

I am reading and reading for a new novel. I have thirty books on my desk about indigenous peoples, “natives in their native place,” as we in Ireland were once ourselves—I mean, an intensely tribal people, round houses and all. Indigenous peoples, and what happened when the colonists washed through their worlds. In some cases very recent history—in some cases, now, as I write this. More sad stories!

Love
Back to Top