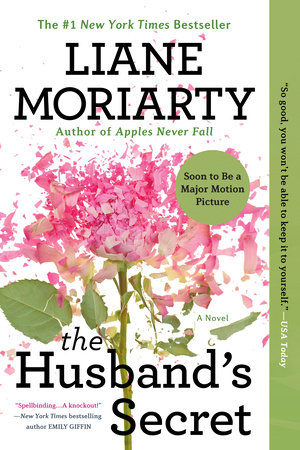 My darling Cecilia, if you’re reading this, then I’ve died…

Imagine that your husband wrote you a letter, to be opened after his death. Imagine, too, that the letter contains his deepest, darkest secret-something with the potential to destroy not just the life you built together, but the lives of others as well. Imagine, then, that you stumble across that letter while your husband is still very much alive…Cecilia Fitzpatrick has achieved it all-she’s an incredibly successful businesswoman, a pillar of her small community, and a devoted wife and mother. Her life is as orderly and spotless as her home. But that letter is about to change everything, and not just for her: Rachel and Tess barely know Cecilia-or each other-but they too are about to feel the earth-shattering repercussions of her husband’s secret.

Acclaimed author Liane Moriarty has written a gripping, thought-provoking novel about how well it is really possible to know our spouses-and, ultimately, ourselves.

Liane Moriarty is the internationally bestselling author of the reading group hit, What Alice Forgot, as well as The Hypnotist’s Love Story, Three Wishes, The Last Anniversary, and the Nicola Berry series for children. Liane lives in Sydney, Australia, with her husband and two small, noisy children.

Me Before You (Movie Tie-In)
Jojo Moyes

The Next Always
Nora Roberts

A Matter of Choice
Nora Roberts

Everything I Never Told You
Celeste Ng
Back to Top