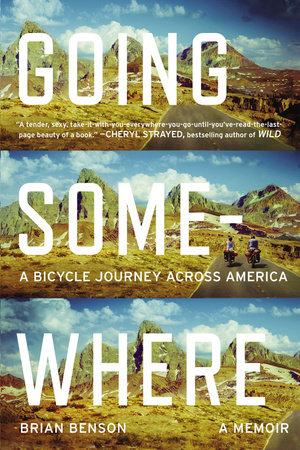 Brian has a million vague life plans but zero sense of direction. So when he meets Rachel, a self-possessed woman who daydreams of bicycling across the States, he decides to follow her wherever she’ll take him. Brian and Rachel soon embark on a ride from northern Wisconsin to Somewhere West, infatuated with the promise of adventure and each other. But as the pair progress from the Northwoods into the bleak western plains, they begin to discover the messy realities of life on the road. Mile by mile, they contend with merciless winds and brutal heat, broken bikes and bodies, each other and themselves—and the looming question of what comes next. Told in a voice “as hilarious as it is wise” (Cheryl Strayed), Going Somewhere is a candid tale of the struggle to move forward.

Brian Benson grew up in the Northwoods of Wisconsin. He now lives in Portland, Oregon, where he teaches writing at the Attic Institute. This is his first book.

A CONVERSATION WITH BRIAN BENSON

1. You’re hitting the road again to promote the publication of Going Somewhere, biking from your Wisconsin hometown to Chicago, with stops in many towns that feature in the book. What are you looking forward to the most about this ride? Are there any lessons you learned from your first trip that you’ll be putting to use?

Pretty much anytime I make plans to take any kind of trip—whether to see a friend in Oakland or go to a wedding in Seattle or spend a weekend at the Oregon Coast—the first question I ask myself is, “Can do this on a bike?” And so the moment I found out Going Somewhere was getting published, I started daydreaming about biking my book tour.

I’m looking forward to so much about this trip. I hope to swim in dozens of lakes and sleep under the stars; to wake up in strange places and eat candy bars for breakfast; to see the very best in other people and in myself. And really, that latter bit is the biggest reason I’m biking from reading to reading: I’m just plain at my best while bike touring. The endorphins drown my anxiety. The shifting surroundings pique my curiosity and disable my snark. The people I meet inspire me. The solitude gives me space to brood, such that I end my days with a strong need to extrovert. The pain and exhaustion, sights and smells, surprises and epiphanies, they keep me attentive, grounded, grateful. And that’s exactly how I want to be when I show up in a room full of people who are taking the time to listen to me and my story.

And yes, I definitely plan on putting to use the many lessons I learned on the trip with Rachel! First off, I no longer worry over gear—if I end up needing something, I’ll just grab it in the next town. Neither do I stress about equipment malfunctions, partly because I now sort of know what I’m doing, but mostly because I’ve grown to appreciate everything that comes from asking a stranger for help. I tend to cook less, and instead eat in diners and taverns, because that’s where all the weirdos hang out. Oh, and I’ve at last learned that to be resourceful, one has to actually acquire resources—on that note, I’m no longer allergic to using maps.

2. How long after you completed your trip did you begin working on this book? How important was it for you to get some distance from the experience? How did it feel to relive it through your own journals and interviews with Rachel?

I actually started writing Going Somewhere before we even finished the trip—in my head, at least. I remember the exact moment I decided to do it: Rachel and I were in Idaho, riding past a two-pump gas station on a heavily-trafficked, potholed road, and it was hot, and we’d overdone it at this microbrew festival in Sandpoint, so we were both sweaty and hung over and not talking much. Despite all that, I was happy. Really happy. I knew what I was doing, and why I was doing it, which, given my usual aimlessness, felt like a pretty big deal. And out of that haze of endorphins and nostalgia and euphoria came the idea to write a book: a book about our trip, about miles and horizons, about making choices and moving forward.

Three days after we got to Portland, I took my notes to a cafe and sat down and wrote the first page. The next day, I rewrote it. And the next. And then I decided that I totally sucked at writing, so I buried those notes in a cardboard box and tried to forget about the book. Something like a year later, after Rachel and I had split up, I finally dusted off those notes. I picked one of my favorite anecdotes—the time when I flipped out over a lost chocolate bar—and wrote a short piece based in the days that led to that moment. I liked what I wrote. But the breakup was still too fresh, and I still didn’t know what the book was about, so again I put the pages down. It was only after several years—after I’d built a deeply rooted life in Portland, and spent loads of time alone, figuring out what the hell I wanted—that I began to figure out what, exactly, my story was about.

Once I got going, I had a lot of fun delving into my journals, poring over maps, calling up “characters,” and having long, nostalgic conversations with Rachel—basically, I did everything I could to remember the little moments and details that made the trip what it was. At a certain point, I realized it had maybe been too long, and I’d perhaps forgotten some of the most visceral sights and sounds and sensations. And so I got back on the bike and took a second, solo trip—to see what I’d forgotten, and what I’d learned.

3. Who are some authors who’ve influenced your writing? What’s your favorite travel memoir (aside from Going Somewhere, of course)?

Oh jeez. This question. Okay, so I’m just going to pick an arbitrary number—let’s go with four—and cut myself off there, because otherwise this could get ugly.

First off, I adore (and despise) Junot Díaz for making it look so easy to tell a gripping story in a super colloquial first-person voice; for writing about masculinity with such uncommon honesty; and for being hands-down the best profanity-user in the history of the world. Second, I’ve read Arundhati Roy’s The God of Small Things about seven hundred times—and yet, because of her gorgeous language and the totally mystifying way she ratchets up tension, I still bawl all the way through the last chapter, every time. Third, I could spend hours talking your ear off about David Foster Wallace, especially his essay “A Supposedly Fun Thing I’ll Never Do Again,” which, like most of his writing, is simultaneously hilarious, profoundly insightful, and deeply horrifying. Finally—and not just because she’s been really, really nice to me—I am a huge fan of Cheryl Strayed. She writes with such honesty and empathy, and every time I finish one of her books or essays, I have this totally batshit sense that she just learned something about me.

As for travel memoir, well, I feel like I should come up with some totally obscure out-of-print masterpiece by a 17th-century Portuguese nun or something, but I’ve just got to go with William Least Heat Moon’s Blue Highways. I have a pretty debilitating nostalgia addiction, and every page of this book feeds it. I’m totally awestruck by his profiles of the people he meets, his mouth-watering descriptions of the landscapes he passes through (yes, mouth-watering, I don’t know why it happens but it does), and his ability to (at least on the page) preserve disappearing American micro-cultures.

4. What are you working on now?

I’ve begun work on a novel set in the Upper Peninsula of Michigan. It’s still a baby, so the characters and plot lines are shape-shifting every day, but in short, it’s a futurist tale in which the Peninsula has been turned into a cultural and wilderness theme park called Superiorland—a place people visit in order to reconnect with some lost idea of simplicity. The story is told, in the present tense, by a Yooper (a colloquial term for Upper Peninsula residents) who’s sitting in his cabin, sharing his version of the history of his home and his vague plans to regain ownership over it. This is my first foray into long-form fiction, and I’m really enjoying it thus far—there’s a wonderful (if at times terrifying) freedom in utterly inventing a story, page by page. And though this story on the surface sounds quite different from Going Somewhere, I feel like both books, at their core, are all about trying to get back home—wherever or whatever that might be.

Learn More About Going Somewhere
print
Back to Top