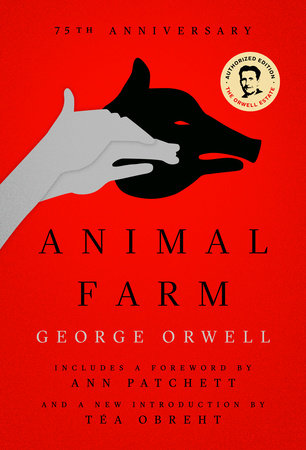 INTRODUCTION
“. . . remember always your duty of enmity towards Man and all his ways. Whatever goes upon two legs is an enemy. Whatever goes upon four legs, or has wings, is a friend. And remember also that in fighting against Man, we must not come to resemble him . . . All the habits of Man are evil. And, above all, no animal must ever tyrannise over his own kind. Weak or strong, clever or simple, we are all brothers. No animal must ever kill any other animal. All animals are equal.” —Animal Farm, from Old Major’s speech

It has been said that Animal Farm is a byproduct of George Orwell’s long-held hatred of totalitarianism. Clearly, in readingAnimal Farm, those familiar with history will find pointed parallels to Stalin’s dictatorship and reign of terror. In this case, however, the principal characters are indeed animals who, possessed of human or near-human traits and abilities, set out to create a Utopian society devoid of human influence.

In the novel’s opening scene, Old Major, the “prized Middle White Boar,” and the oldest and wisest of all beasts on Manor Farm, gathers the animals and tells them of a vision that came to him in a dream. In essence, he has foreseen a world in which animals rule themselves, live among one another equally, and work only toward the betterment of their own. Inspired by these words, and chaffing under their human master, Mr. Jones, the animals gather secretly and plan rebellion. Led by two of the farm’s pigs, Napoleon and Snowball (for the pigs soon prove the cleverest of all the animals on the farm), the animals mount a successful attack, rid themselves of Jones and his human counterparts, and take control of the farm.

With new found freedom and a sense of optimism toward the future, the animals set forth in re-establishing Manor Farm, now renamed Animal Farm, as their own. Under the leadership of the pigs, farm labor is organized and divided among the animals, and a list of seven commandments is established—deemed unalterable—under which all animals on the farm would adhere. Slowly, however, some of the animals become wary of the pigs, who don’t necessarily work, but supervise, and whose pronouncements become law despite little or no discussion. The pigs’ usurpation of power continues to the point where their rule is questioned only upon pain of death. Consequently, Old Major’s vision of a peaceful brotherhood of animals has mutated into a world where reality and truth are molded and disseminated to support the ruling class.

With biting irony and sharp insight into human nature, Orwell illustrates the dangers inherent in a complacent citizenry and the consequences of unchecked power. To this day, Animal Farm remains a haunting vision—the lessons of which might be heeded by all concerned with issues of self-determination and political process.

Eric Arthur Blair (George Orwell) was born in 1903 in India, where his father worked for the Civil Service. The family moved to England in 1907 and in 1917 Orwell entered Eton, where he contributed regularly to the various college magazines. From 1922 to 1927 he served with the Indian Imperial Police in Burma, an experience that inspired his first novel, Burmese Days (1934). Several years of poverty followed. He lived in Paris for two years before returning to England, where he worked successively as a private tutor, schoolteacher and bookshop assistant, and contributed reviews and articles to a number of periodicals.Down and Out in Paris and London was published in 1933.

In 1936, he was commissioned by Victor Gollancz to visit areas of mass unemployment in Lancashire and Yorkshire, andThe Road to Wigan Pier (1937) is a powerful description of the poverty he saw there. At the end of 1936 Orwell went to Spain to fight for the Republicans and was wounded, and Homage to Catalonia is his account of the civil war. He was admitted to a sanatorium in 1938 and from then on was never fully fit. He spent six months in Morocco and there wrote Coming Up for Air. During the Second World War he served in the Home Guard and worked for the BBC Eastern Service from 1941 to 1943. As literary editor of the Tribune he contributed a regular page of political and literary commentary, and he also wrote for theObserver and later for the Manchester Evening News. His unique political allegory, Animal Farm, was published in 1945, and it was this novel, together with Nineteen Eighty-Four (1949), which brought him world-wide fame.

George Orwell died in London in January 1950. A few days before, Desmond MacCarthy had sent him a message of greeting in which he wrote: ‘You have made an indelible mark on English literature . . . you are among the few memorable writers of your generation.’

The Book of Form and Emptiness
Ruth Ozeki

Cup of Gold
John Steinbeck
Back to Top