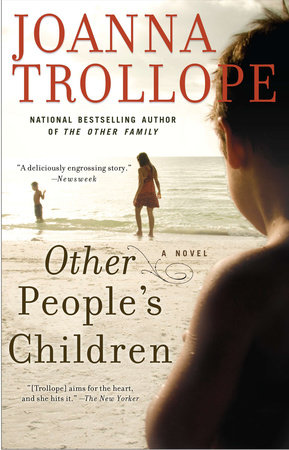 When a man and a woman get married, things can get complicated. When they have children from previous marriages, “complicated” can become the understatement of the year. Joanna Trollope explores this truth, and reveals the laughter and tears, the tension and the tenderness, that live behind the statistics and stereotypes about stepfamilies—in her most involving and compelling novel yet.

Joanna Trollope, a member of the same family as Anthony Trollope and a #1 bestselling author in England, is the author of the novels Girl from the South, Next of Kin, Marrying the Mistress, Other People’s Children,The Best of Friends, and A Spanish Lover, as well as The Choir and The Rector’s Wife, which were both adapted for Masterpiece Theatre. Writing as Caroline Harvey, she is also the author of the historical novelsThe Brass Dolphin, Legacy of Love, and A Second Legacy.

I Met Someone
Bruce Wagner

My Dream of You
Nuala O’Faolain

The Game
A. S. Byatt

Work: A Story of Experience
Louisa May Alcott

The Lambs of London
Peter Ackroyd

The Rules of Engagement
Anita Brookner

What the Family Needed
Steven Amsterdam

After Hannibal
Barry Unsworth
Back to Top