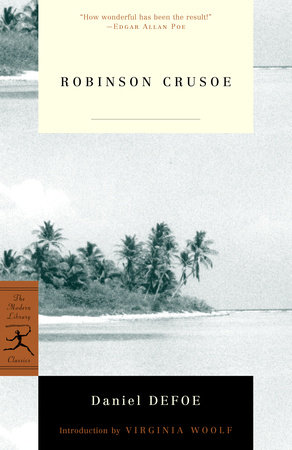 1. Robinson Crusoe is regarded as one of the first English novels. What were the qualities that defined the English novel? How has the meaning of the word "novel" changed? Do we use the term more loosely now or has it evolved into something entirely different?

2. Defoe’s novel is also thought to be one of the earliest examples of the use of psychological realism. Defoe posits himself as "editor" and Crusoe as the author. How does his use of voice and point of view differ from that of his contemporaries? How much of his fiction might be influenced by his background in journalism and nonfiction?

3. How much of Robinson Crusoe is supposed to be "real" and journalistic and how much is intended to be allegorical? How does Defoe use Crusoe to espouse certain values? In what sense is the book a morality story?

4. Examine Crusoe’s relationships with Xury and Friday. Critics have seen Robinson Crusoe as representative of British colonialism and imperialism, glorifying the subjugation of other cultures. How does Defoe seem to comment on the institution of slavery and issues of race?

5. How do Robinson Crusoe’s experiences on the island comment on the society from which he has been separated?

6. How does what we now call the Protestant work ethic pervade Defoe’s novel? Robinson seems to channel all of his energy into the pursuit of manual labor; the story is a series of daily routines and a tribute to work. To what end? Is his newfound work ethic accompanied by a spiritual awakening?

7. How is value established on Crusoe’s island? How does the language of economics inform the text?

8. What is the nature of Robinson Crusoe’s relationship with his environment? Does he regard his surroundings as hostile? Does he seek to re-create the landscape?

Journey to the Centre of the Earth
Jules Verne

Journey to the Center of the Earth
Jules Verne

The Annals of Imperial Rome
Tacitus