A Song Flung Up to Heaven Reader’s Guide 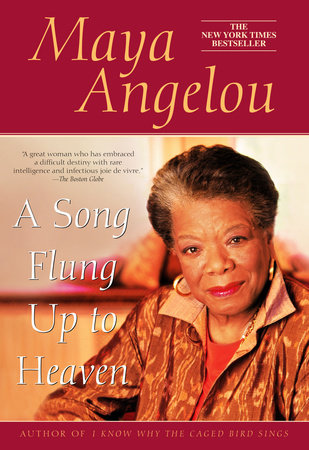 A Song Flung Up to Heaven Reader’s Guide

print
A Song Flung Up to Heaven Reader’s Guide

Maya Angelou has shared much of her life story with us through candid, gracefully crafted autobiographies. In A SONG FLUNG UP TO HEAVEN, she recalls one of the most chilling chapters in American history, a period in the 1960s marked by the Watts riots and the assassination of the vocal civil rights leaders, Malcolm X and Dr. Martin Luther King. For Angelou, who had recently returned from a sojourn in Africa, these events carried a particularly personal impact; she had agreed to assist both men in their activism just weeks before their deaths. But these tumultuous months also, eventually, compelled her to capture on paper the memories we now know so well as I Know Why the Caged Bird Sings. The conclusion to that powerful, resonant memoir, A SONG FLUNG UP TO HEAVEN is the continuing story of a copiously gifted writer finding her literary voice, while segments of the nation search for a healing message. A SONG FLUNG UP TO HEAVEN will stir contemplation and rejuvenation in all who read it.

The questions, discussion topics, and author biography that follow are intended to enhance your reading of Maya Angelou’s A SONG FLUNG UP TO HEAVEN. We hope they will enrich your experience of this poignantly honest memoir.

1. Following an epigraph that refers to going home, Maya Angelou begins by describing her Pan Am flight from Ghana to the United States. What is the mood of this homecoming? How does Angelou seem to define “home?”

2. What does Angelou reveal about race and identity in her comparison of American racial tensions to the impending Ghanaian revolution?

3. The infrequent references to Angelou’s son, Guy, form a subtle parallel plot. How does his narrative reflect hers in this part of their lives?

4. Angelou focuses on three distinct American locales in A SONG FLUNG UP TO HEAVEN: California, Hawaii, and New York City. What does each of these settings impart to her life story?

5. In the last chapter, Angelou describes a social hierarchy in which all men, black and white, are perceived as superior to black women. How does Angelou respond to the various men in this book, ranging from the close bond she shares with her brother to the bitter job tryout with Norman Cousins?

6. Explore Angelou’s literary techniques. What is her tone when delivering particularly painful or startling information? How does her skill as a poet appear to influence her word choice throughout A SONG FLUNG UP TO HEAVEN?

7. Visible and prolific, Angelou is a bridge between two very different generations of African American women. What does she retain of her mother’s persona? What does Angelou appear to want the next generation to learn from her? Is pious Aunt Leah a timeless figure or an anachronism?

8. A SONG FLUNG UP TO HEAVEN raises many “what ifs”; Angelou herself imagines several hypothetical scenarios, such as the one in which she had stayed with Malcolm X in New York. Unfortunate timing and eerie coincidences beg one primary question in this memoir: how might Angelou’s path have differed had Malcolm X and Dr. King not been murdered?

9. What makes Angelou’s account of the Watts riot (chapter nine) especially enlightening? What logic does she vocalize amidst the chaos? What does the untitled poem she wrote at the kitchen table (page 74) convey that you would never have learned from news coverage of the event?

10. If this book is itself a song flung up to heaven, what is the nature of its message? Supplication? Praise? Confession? Lamentation? Why must it be flung, rather than simply sung?

11. When Dolly McPherson and Maya Angelou conspire to reveal their African lover’s hypocrisy, the two women end up feeling crestfallen. Does their reaction appear to be consequence of being female, or African American females in particular?

12. Against the backdrop of domestic revolution and international inhumanity, such as the imprisonment of Nelson Mandela, A SONG FLUNG UP TO HEAVEN depicts the author coping with the most mundane and universal aspects of life—finding work, cooking meals, navigating family crises. In what way do these everyday details mirror the larger issues brewing outside Angelou’s door?

13. Do you detect a shift in Angelou’s outlook from the time she arrives in the United States again to the visit with her mother in the book’s final pages?

14. In the last chapter, Angelou writes that she assumed composing a book would require her “to examine the quality in the human spirit that continues to rise despite the slings and arrows of outrageous fortune.” This has indeed been a recurring theme in her work; what do such examinations uncover in A SONG FLUNG UP TO HEAVEN?

Poet, writer, performer, teacher, and director, Maya Angelou was raised in Stamps, Arkansas. In addition to her autobiographies and poetry collections, she wrote the celebrated poem “On the Pulse of Morning,” which she read at the first inauguration of President Clinton.

“Her writing is as gentle as a mist, and as powerful as daybreak.”
—Chicago Sun-Times

For more information on A SONG FLUNG UP TO HEAVEN, and to read an excerpt, visit our website at www.bantamdell.com. While there, drop by our Reading Group Guide Feature to learn about other titles perfect for book clubs.
Learn More About A Song Flung Up to Heaven
print

Gather Together in My Name

The Heart of a Woman

The Collected Autobiographies of Maya Angelou

My Life on the Road
Back to Top