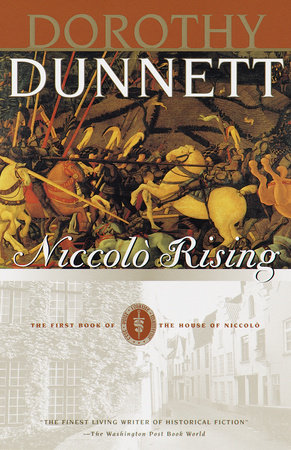 Bruges, 1460. Street smart, brilliant at figures, adept at the subtleties of diplomacy and the well-timed untruth, Dunnett’s hero rises from wastrel to prodigy in a breathless adventure that wins him the hand of the most powerful woman in Bruges–and the hatred of two powerful enemies. From a riotous–and potentially murderous–carnival in Flanders to an avalanche in the Alps and a pitched battle on the outskirts of Naples, Niccol? Rising brilliantly combines history, adventure and high romance.

Despite all the comedy about unlikely items of "trade," from the canon at the beginning to the ostrich at the end, this novel manages to slip in a lot of information about the growing centrality of trade and commerce to the affairs of people and nations. "Alum," if you look it up, has a number of special commercial properties: is Dorothy nudging us here into thinking of it symbolically and if so how? How does the commerce in the mineral "alum," help knit the plot together? How about the gun? The ostrich? What commodities besides material goods are traded?

2. The protagonist "Claes" becomes "Nicholas" by the end of the novel: as with the names, how much of the character’s "development" is simply recognition of what has already been there, and how much is genuine change? How does Felix’s recognition in chapter six, "Claes was always making toys and other people broke them," illuminate this character? What about the exchange with Anselm Adorne towards the end of the novel: "I thought of a way to do it. That was all." "And did it. Why?" "To see what would happen."

3. In Katelina van Borselen Dorothy Dunnett has created a complicated, passionate and in some ways surprisingly modern young woman. What does Katelina mean when she says (chapter nine) that she wishes she were a widow? Does she understand her own nature at this point? How does her journey in the novel from daughter to lover to wife point up the dilemma of young women of rank in this period of transition between the medieval and the modern? In what respects is Katelina better or worse off than the servant Mabelie?

4. The deaths of Felix de Charetty and Jaak de Fleury are two of the more disconcerting and dramatic moments in the novel; more subtle but equally destructive are the underminings of the Scottish St. Pols, father and son. Why do certain intelligent observers come to think Nicholas engineered all these things? What level of responsibility do you think he bears in each of these cases?

5. Why does Marian de Charetty emphasize to the physician Tobie and the lawyers Julius and Gregorio that they must become Nicholas’s "keepers"? Are there others in the novel who perform this function? What, in this context, do you think Tobie means at the end of chapter eight when he observes of the weeping Nicholas that "the voice that he needed didn’t exist"?

She has also led a busy life in public service. In the past, she has been a member of the Board of Trustees of the National Library of Scotland, a Trustee of the Scottish National War Memorial, and Director of the Edinburgh Book Festival. She has also served on numerous cultural committees, and is a Fellow of the Royal Society of Arts. In 1992 she was awarded the Office of the British Empire for services to literature. She lives in Scotland and has two sons and one grandson.
Learn More About Niccolo Rising
print

The Spring of the Ram
Dorothy Dunnett

Time and Chance
Sharon Kay Penman
Back to Top