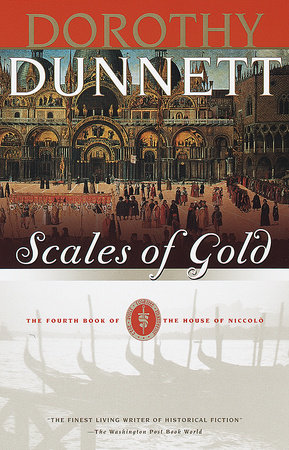 The year 1464 finds Nicholas back in Venice. Plagued by enemies bent on dissolving his assets and smearing his character, he sets sail for Africa, legendary location of the Fountain of Youth, home to a descendant of Sheba and Solomon, and the source of gold in such abundance that men prefer to barter in shells. He will learn firsthand the brutality and grandeur of the Dark Continent, from the horror of the slave trade to the austere nobility of Islamic Timbuktu. He will discover too the charms of the beautiful Gelis van Borselen–a woman whose passion for Nicholas is rivaled only by her desire to punish him for his role in her sister’s death. Erotic, lush with detail, Scales of Gold embraces the complexity of the Renaissance, where mercantile adventure couples with more personal quests behind the silken curtains of the Age of Discovery.

1. For Discussion: Scales of Gold

In Cyprus and Trebizond, even in Bruges, Nicholas and his friends had encountered various aspects and consequences of the practice, old as history, of humans enslaving humans. During this African adventure, what new elements in this practice come to the fore? What other aspects of Dorothy’s vivid portrayal of multi-cultural, multi-geographical Africa catch your eye in this novel?

2. Why does Father Godscale want to go to Ethiopia? What is Nicholas’s final judgement about the success of this failed mission, for the priest’s own soul, and for the general community of Christians?

3. How do some of the many transformations of the African Lopez recall (or reverse?) those of Nicholas vander Poele? What for you are the deepest or most interesting aspects of this soul-friendship? Why does the plot make a significant point of Umar’s final investment in being a father?

4. Is Gelis van Borselen the heroine of Scales of Gold? In which relationship are there elements of the traditional Romance plot ? When, and why, do you think she decides to do what she reveals to Nicholas on their wedding night?

5. Spectacles–a triumph of science, commerce and art, a ‘frivolity" Nicholas calls them at his Venetian party. What symbolic and practical uses does this product serve in the novel? How do spectacles connect with and compare to another ubiquitous product, useful as gift, in trade, as symbol, in this as in the other novels–books?

She has also led a busy life in public service. In the past, she has been a member of the Board of Trustees of the National Library of Scotland, a Trustee of the Scottish National War Memorial, and Director of the Edinburgh Book Festival. She has also served on numerous cultural committees, and is a Fellow of the Royal Society of Arts. In 1992 she was awarded the Office of the British Empire for services to literature. She lives in Scotland and has two sons and one grandson.
Learn More About Scales of Gold
print

Until the Sea Shall Give Up Her Dead
S. Thomas Russell

The Serpent Garden
Judith Merkle Riley
Back to Top