The Spring of the Ram Reader’s Guide 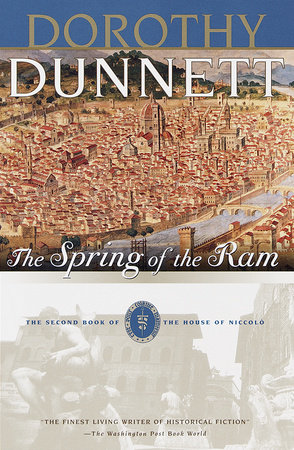 The Spring of the Ram Reader’s Guide

print
The Spring of the Ram Reader’s Guide

Backed by none other than Cosimo de’ Medici, Nicholas sails the Black Sea to Trebizond, last outpost of Byzantium, and the last jewel missing from the crown of the Ottoman Empire. But trouble lies ahead. Nicholas’ stepdaughter–at the tender age of thirteen–has eloped with his rival in trade: a Machiavellian Genoese who races ahead of Nicholas, sowing disaster at every port. And time is of the essence: Trebizond may fall to the Turks at any moment.

1. For Discussion: The Spring of the Ram

The "design " that Nicholas vander Poele is making of his trading journey to Trebizond has many threads: one of them is the assembling of a company of brilliant but quarrelsome "experts" who will run a new global commercial enterprise. How are the comic "recruiting" of John le Grant, the subtle binding of Father Godscale, the careful promoting of Loppe, examples of this thread in the design? What in Nicholas himself sometimes hinders this part of the design? As a business, but also as a work of art, who is this design really for?

2. One of the achievements of The Spring of the Ram is the extraordinarily convincing depiction, from the inside, of the mind of an intelligent but spoiled twelve year old girl bent on challenging and possessing her world, whatever the consequences. What are some of the highlights of this portrayal, and what, finally, do you think of Catherine de Charetty?

3. On the same side, for once, as it seems, Nicholas vander Poele and Pagano Doria play the ancient Greek form of polo, tzukanion, before the court of the Emperor in chapter 34, and Father Godscale, noting the similar working of the two agile minds and bodies, recognizes that despite everything "Nicholas was in his element, partly because of the game Doria was giving him." What, more broadly, is the game Pagano Doria is giving Nicholas? How are they alike and different? What understandings do you think are being conveyed as one dies, holding the eyes of the other for long moments, in chapter 38?

4. Nicholas made the yoyo that amuses Cosimo de Medici in the model of a persian toy, but by chapter 33 is reflecting that the Lady Violante of Naxos "was a better toymaster than he. A cord round his middle and running." Is he right? How does this image illuminate the politics of the journey to Trebizond? Does it also illuminate the sexual politics of the novel’s last scene?

5. Intimate enemies, Nicholas vander Poele and Simon de St. Pol have each struck a consummately agonizing blow at the other through an angry young woman. Did they know they were doing so? What are some of the other ironies and potential tragedies here? How else does Nicholas feel and respond to what Marion de Charetty has called "the wound of Simon’s enmity"?

She has also led a busy life in public service. In the past, she has been a member of the Board of Trustees of the National Library of Scotland, a Trustee of the Scottish National War Memorial, and Director of the Edinburgh Book Festival. She has also served on numerous cultural committees, and is a Fellow of the Royal Society of Arts. In 1992 she was awarded the Office of the British Empire for services to literature. She lives in Scotland and has two sons and one grandson.
Learn More About The Spring of the Ram
print

Until the Sea Shall Give Up Her Dead
S. Thomas Russell

The Son Avenger
Sigrid Undset
Back to Top