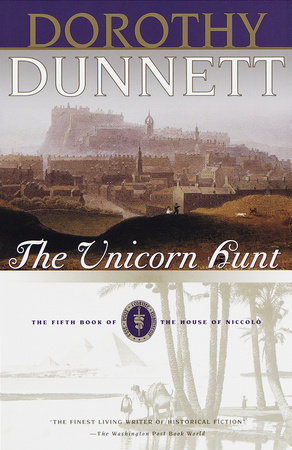 Scotland, 1468: a nation at the edge of Europe, a civilization on the threshold of the Modern Age. Merchants, musicians, politicians, and pageantry fill the court of King James III. In its midst, Nicholas seeks to avenge his bride’s claim that she carries the bastard of his archenemy, Simon St. Pol. When she flees before Nicholas can determine whether or not the rumored child is his own–or exists at all–Nicholas gives chase. So begins the deadly game of cat and mouse that will lead him from the infested cisterns of Cairo to the misted canals of Venice at carnival.

1. For Discussion: The Unicorn Hunt
In this novel the House of Niccolo series arrives decisively in Scotland, to add to its portraits of leadership, good and bad, those of the Stewart ruling family. How does Dorothy Dunnett dramatize the nature, and possible consequences for the nation, of the relationships among James and Alexander, John and Margaret and Mary? What impact does Nicholas vander Poele have on these?

2. "Tired of living life as a victim," Nicholas embarks in this novel on a complex set of "punishments" of the man he believes is his father. What do you think of this emerging side of him? Of the punishments themselves? Do his punishments hit only their target?

3. In chapter 26 of this novel Nicholas learns he has the capacity to "divine" where water is, or metals are: how unique do you think this kind of "divining," or "dowsing," is? Might you even be able to do this yourself? How is this human gift related to the more mysterious gifts, and roles, of figures like Dr. Andreas of Vesalia and Nicholai de Giorgio de Acciajuoli? Why do you think Dorothy links this gift in chapter 26 to the waking dreams, hallucinatory visions, scraps of insight from another life or realm to which Nicholas is also receptive?

4. "Walk over with me." "Go alone. I have a child." Probably the most intellectually complex and emotionally wrenching scene of the novel takes place at the top of a high mountain, climax of a pilgrimage, in chapter 41. What purpose does this scene serve its romance; the religious references (positive and negative) woven into it? What does Nicholas learn here? Why does he "free" Gelis after her response to his challenge?

5. Who, or what, is the "unicorn" of the title? Are there multiple possibilities? Several hunts? Some who occupy positions both of hunter and hunted? One version of the legend of the Unicorn requires a "virgin" as both controller and alter-ego of the unicorn–who could this description identify if anyone, among the characters of the novel?

6. For Discussion: The House ofNiccol?

She has also led a busy life in public service. In the past, she has been a member of the Board of Trustees of the National Library of Scotland, a Trustee of the Scottish National War Memorial, and Director of the Edinburgh Book Festival. She has also served on numerous cultural committees, and is a Fellow of the Royal Society of Arts. In 1992 she was awarded the Office of the British Empire for services to literature. She lives in Scotland and has two sons and one grandson.
Learn More About The Unicorn Hunt
print

Under Enemy Colors
S. Thomas Russell
Back to Top