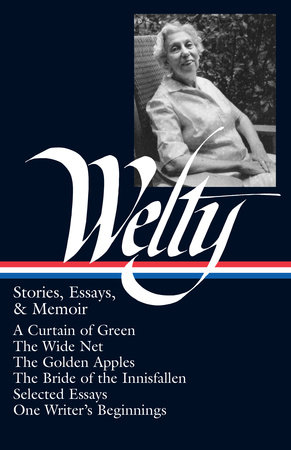 In this volume along with its companion, The Library of America presents all of the most significant and best-loved works of Eudora Welty. Of her own work, she wrote: “What I do in writing of any character is to try to enter into the mind, heart, and skin of a human being who is not myself. Whether this happens to be a man or a woman, old or young, with skin black or white, the primary challenge lies in making the jump itself. It is the act of a writer’s imagination that I set most high.”

Stories, Essays and Memoir presents Welty’s collected short stories, an astonishing body of work that has made her one of the most respected writers of short fiction. A Curtain of Green and Other Stories (1941), her first book, includes many of her most popular stories, such as “A Worn Path.” “Powerhouse,” and the farcical “Why I Live at the P.O.”

The Wide Net and Other Stories (1943), in which historical figures such as Aaron Burr (“First Love”) and John James Audubon (“A Still Moment”) appear as characters, shows her evolving mastery as a regional chronicler.

The Golden Apples (1946) is a series of interrelated stories about the inhabitants of the fictional town of Morgana, Mississippi. It was Welty’s favorite among her books, and she described it as “an experience in a writer’s own discovery of affinities. In writing, as in life, the connections of all sorts of relationships and kinds lie in wait of discovery, and give out their signals to the Geiger counter of the charged imagination, once it is drawn into the right field.”

The stories of The Bride of Innisfallen and Other Stories (1955) are set both in the American South and in Europe. Also included are two stories from the 1960s, “Where Is the Voice Coming From?”, based on the shooting of Medgar Evers, and “The Demonstrators.”

A selection of nine literary and personal essays includes evocations of the Jackson, Mississippi, of her youth that is essential to her work (“The Little Store,” “A Sweet Devouring”) and cogent discussions of literary form (“Writing and Analyzing a Story,” “Place in Fiction”). The volume concludes with One Writer’s Beginnings (1984), the sensitive memoir of her childhood, which has become one of the most widely read of her books.

Eudora Welty (1909-2001) was the author of novels, short stories, memoirs, and essays, including such celebrated works as The Optimist’s Daughter, which won the Pulitzer Prize for Fiction in 1973. In 1998 she became the first living writer to have… More about Eudora Welty