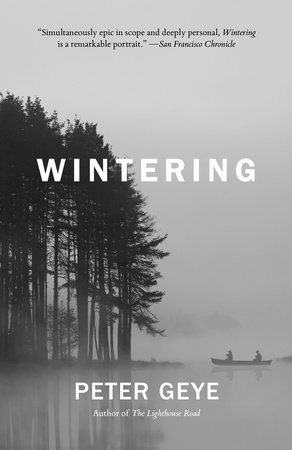 The introduction, author biography, discussion questions, and suggested reading that follow are designed to enhance your group’s discussion of Wintering, the captivating new novel by Peter Geye.

1. What is “wintering” and why do you think the author chose this term as the title for his book? Why does Harry want his son, Gus, to go with him into the wilderness and why does he choose to embark on this journey as the winter season is approaching?

2. At the opening of the novel, Berit Lovig says that “two stories began” the day that Gus came to see her in November. She says, “One of them was new and the other as old as this land itself.” (5) What does she mean by this? What is the story that is “as old as [the] land itself”?

3. Who reveals or narrates the two stories and who is the audience? Do you believe that they are reliable narrators? Why or why not? Does any single point of view seem to dominate the text? Explain. Does the book ultimately answer the question of why these characters wish to exchange their stories?

5. Why is Gus scared before he sets out into the wilderness with his father? What does he believe that they risk leaving behind? Why does Gus choose to go with his father rather than attend one of the colleges that has accepted him?

6. According to Berit, what is most important to the inhabitants of Gunflint? Does the rest of the novel support or disprove this view? Where in the novel can we see evidence of what means the most to Berit’s neighbors and family?

7. Gus tells Berit that “history and memory aren’t the same thing.” (76) What does he say is the difference between the two? Do you agree with him?

8. Why does Gus go after the bear even though he knows it could kill him? What does he cite as his primary motivation or influence? Does he seem to have learned anything from this experience? Is he changed by it? If so, how?

9. What does Gus say is his religion (138)? How does he come to find this religion and what feelings accompany it? Do any of the other characters seem to share this religion? In what ways?

10. What does the book seem to suggest about our relationship with the unknown past? How does Harry’s view of his mother or Gus’s view of his grandmother, for instance, change as secrets are revealed? What, if anything, changes for Gus and Berit as they exchange stories and expose secrets? Does the book ultimately suggest whether it is better to face the past or to accept that there are things that can’t be known?

11. How are Gus and Harry changed by their experience in the wilderness? Berit asks Gus if he believes that Harry’s time in the borderlands took his true nature away from him. How does Gus respond? Would you say that the experience altered the true nature of either of the men? Why or why not?

12. Although the novel centers on the story of Gus and Harry, Berit also reflects on her own life. How does she feel about the choices she has made? What regrets does she have? How has hearing Gus’s story affected her? What does the story make her wonder about or reconsider?

14. Consider the theme of discovery and its variations—­rediscovery, self-­discovery, and so on. What are the main characters in the novel hoping to discover? What discoveries do they make? What causes them to rediscover or reevaluate what they think they know about themselves and others?

15. What is the story that Berit says was the “prologue” to Harry’s life? (295) Does learning this story from Berit change Gus’s opinion of his father? Does it change your own assessment of Harry’s character? What does this indicate about the way that we come to know other people and the judgments we make?

17. Explore the novel’s theme of crossing borders. How do the characters in the novel cross boundaries or otherwise reach beyond that with which they are familiar? What inspires them to challenge these boundaries? How are they changed by their experiences of physical and/or psychological boundary crossing?

The Slap
Back to Top