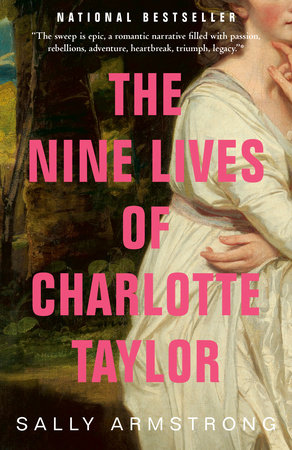 She was a woman with a past. Not exactly a gentlewomen. It was said that she came from an aristocratic family in England, although there wasn’t much that seemed genteel about the settler my elders always referred to as “that old Charlotte.” Words like lover and land grabber drifted down from the table to where we kids sat on the floor, but the family also had a powerful respect for her, as if their own fortitude and guile were family traits passed down from the ancestral matriarch. For as long as I can remember, I’ve tried to imagine the real life she lived and how she ever survived it. (p. xi)
–excerpted from The Nine Lives of Charlotte Taylor

It is 1775 and the flame-haired Charlotte Taylor, an impetuous Sussex lass of twenty, has fled the conscripts of her genteel country life in the company of her lover, her family’s black butler Pad Willisams. On board a cargo ship headed for the West Indies, with only a hastily packed trunk and her indefatigable spirit to her name, Charlotte is unafraid, brazenly confident that she and Pad will carve out a bright future for themselves in the sunny paradise of Jamaica.

But after a dangerous voyage during which they become intimately acquainted with disease and death, and even survive a pirate attack, Charlotte and Pad arrive in Jamaica and meet the same interracial prejudices that plagued them in England. When Pad dies of yellow fever within days of their arrival, Charlotte is left unprotected in a perilous land with a plantation owner making lecherous designs on her. She quickly forges an alliance with the elderly Commodore Walker, who is set to sail with a load of sugar for the New World. She arrives on the shores of New Brunswick, no plan available to her now, carrying with her a secret that could undo her future altogether: she is unmarried, and pregnant.

Aware that her advancing pregnancy will soon jeopardize her status as a woman of good background, Charlotte, in her hard-won pragmatism, seeks help from the women who live at the Mi’kmaq camp nearby. She becomes fast friends with these wise and kind people, and through the kindness of the Mi’kmaq and Acadians she comes to learn the essential skills of survival that will save her many times over–all the while under the watchful gaze of Wioche, the Mi’kmaq man who will come to love her for a lifetime.

Moving fluidly between her adopted Mi’kmaq community and the British settlers with whom she shares her land of birth, Charlotte earns a reputation as a woman of smart and forthright–yet unpredictable–nature. Through the ensuing decades-long tumult of her three marriages and widowhoods, Charlotte deftly manages the feat of raising ten children to adulthood in an unrelenting wilderness, surviving the brutalities that are forever lurking at the margins of their existence in this New World.

Throughout it all, Charlotte’s relationship with Wioche remains an unbroken thread, a source of fidelity and passion in a life often hungry for such sustenance. Wioche stays true to his promise to look after her as a woman of the People, his call of the whippoorwill announces his visits to bless her children with the prayers of his People and to wrap them all in warm furs against the bitter cold. But their affair is largely unrequited, save for the stolen moments of bliss and passion that will have to hold them both through their difficult lifetimes.

The Nine Lives of Charlotte Taylor is a rich historical tapestry, woven from both the historical facts and the vivid imaginings of an award-winning journalist who is also a gifted storyteller. Defying history’s ellipsis, the scant recorded history of the domestic lives led by women in the background of history’s wars, this is the tale of a true indomitable spirit, Charlotte Taylor, “the mother of Tabusintac.”

1. Sally Armstrong writes of Charlotte in the book’s introduction, “For as long as I can remember, I’ve tried to imagine the real life she lived and how she ever survived it.” (p. xi) How was your experience of reading this book affected by knowing that it was based on the story of a real person?

2. As Pad lays dying in Jamaica, the degenerate Lutz comments to Charlotte, “Many widows, alone and grieving, are grateful for the support of a proper man.” (p. 34) Does this opinion about the desperate condition of women in Jamaica also apply to the situation in which Charlotte finds herself in New Brunswick? Is her situation better or worse there?

3. Charlotte briefly rues her love affair with Pad, thinking that he may have survived if they had never left England–and that she would not be in her current predicament. Had it not been for her romance with Pad, do you think her life would have taken a more conventional path?

4. During her first Christmas in Nipisiguit, Charlotte is treated to a fireside ceremony with her new Acadian and Mi’kmaq friends. “There in the wilderness, by the light of the fire and surrounded by the spirituality of two peoples she has come to know, Charlotte covers the final distance between England and the New World.” (p. 143) What does this mean?

5. As they watch the burning ghost ship on the night of Charlotte’s wedding with Blake, Commodore Walker comments to the men jeering at Mi’kmaq legend, “Aye. But their Great Spirit is but God . . . it might become us on occasion to be humbled by his works, whatever they be and whatever He may be called. We’re a proud lot, we men. A day may come when we shall be glad of mysteries.” (p. 174) What does Walker mean by this? Do you agree?

6. Some of Charlotte’s marriages appear to have been made for quite pragmatic reasons, and with virtual strangers, yet she turns down the proposal made by Commodore Walker, with whom she has an affectionate relationship and who promises her a life of comfort. How would her life have been different had she accepted his proposal? Why do you think she made the choices in marriage that she did? Were they the right ones?

7. Charlotte and Wioche maintain a love affair that lasts many decades until her death. How do they manage this bond despite the damage done to his people by hers? Why do they never marry?

8. It is the men who “settled” New Brunswick who have dominated historical accounts of this period, stories involving war with the Acadians and the First Nations. Charlotte’s story reflects a different perspective. What is it about Charlotte’s character that allows her to move so skillfully between worlds and cultures? Why is this quality significant?

9. For those dwelling along the Miramichi, including Charlotte, nature is a fierce opponent in the struggle for survival. But Charlotte also carries with her the instinct to love the beauty of this untamed wilderness. Discuss this contradiction in Charlotte’s relationship to nature.

10. Charlotte has many opportunities to return home to England, why doesn’t she go?

11. Why do you think Charlotte leaves all her land to William Wishart?

12. Near the end of her life, Charlotte comes to believe herself complicit in the expulsion of the Acadians and Mi’kmaq from the Miramichi. “Her whole life here, it seems, has been lived in the knowledge that everything she wished to secure for her family helped to undo the security of her friends.” (p. 382) Discuss this perspective. Was she complicit?

13. BONUS: FUN WITH FOOD AND FICTION
Charlotte gives her children a glimpse into her once affluent past when she teaches Elizabeth to make Welsh Rabbit in the manner of her family’s cook. (p. 286) Look up a recipe for Welsh Rabbit (sometimes known as “Rarebit”) and consider making it for your book club meeting.

Sally Armstrong is a two-time Amnesty International award winner, a member of the Order of Canada, documentary filmmaker, teacher, human rights activist, author and a contributing editor at Chatelaine and Maclean’s. In 2002, Armstrong was appointed special UNICEF representative in Afghanistan.

As a journalist, Armstrong has covered stories in zones of conflict all over the world, reporting from the Middle East, Bosnia, Somalia, Rwanda and Afghanistan. Her work focuses on what she calls “human rights and human wrongs.” Her bestselling book, Veiled Threat: The Hidden Power of the Women of Afghanistan, was published in 2002. The Nine Lives of Charlotte Taylor is her third book.

When not traveling to war zones, Armstrong lives part of each year in the quiet community of Bathurst, her childhood summer home, near the spot where Charlotte Taylor first set foot in New Brunswick.
Learn More About The Nine Lives of Charlotte Taylor
print

Up from Orchard Street
Eleanor Widmer

The Search for Joyful
Benedict Freedman and Nancy Freedman

My One Square Inch of Alaska
Sharon Short

With Love from the Inside
Angela Pisel
Back to Top