The Noise of Time Reader’s Guide 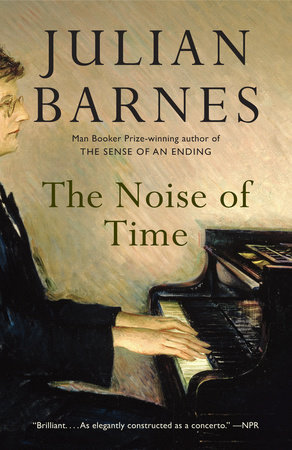 The Noise of Time Reader’s Guide

The questions that follow are intended to enhance your reading group’s discussion of The Noise of Time, Julian Barnes’s masterly meditation on the meaning of art and artists in society, explored through a vivid reimagining of the life of Russian composer Dmitri Shostakovich.

1936: Dmitri Shostakovich, just thirty years old, reckons with the first of three conversations with power that will irrevocably shape his life. Stalin, hitherto a distant figure, has suddenly denounced the young composer’s latest opera. Certain he will be exiled to Siberia (or, more likely, shot dead on the spot), Shostakovich reflects on his predicament, his personal history, his parents, his daughter—all of those hanging in the balance of his fate. And though a stroke of luck prevents him from becoming yet another casualty of the Great Terror, he will twice more be swept up by the forces of despotism: coerced into praising the Soviet state at a cultural conference in New York in 1948, and finally bullied into joining the Party in 1960. All the while, he is compelled to constantly weigh the specter of power against the integrity of his music. An extraordinary portrait of a relentlessly fascinating man, The Noise of Time is a stunning meditation on the meaning of art and its place in society.

1. Discuss the passage that opens The Noise of Time. How does this story set the tone for the novel? What indicators does it give about class and social politics in the Soviet Union?

2. The first line of Part I reads: “All he knew was that this was the worst time.” Examine this statement. How does this sentiment echo throughout the novel? Consider Shostakovich’s level of anxiety and fear in this passage as compared to what he feels during his interactions later in life with Power. How does he cope with these feelings?

3. Discuss the circumstances around the debut performance of Lady Macbeth of Mtsensk. How did the presence of Stalin and his government officials create an environment of apprehension? How did the media work with the state to create a smear campaign against Shostakovich?

4. After the performance of Lady Macbeth of Mtsensk, Shostakovich waits for what he thinks will be his inevitable arrest. How did you interpret his late-­night elevator stakeouts? Was his fear warranted? Discuss the brief interaction with his neighbor on page 18. How did the nod between them indicate a much deeper commentary on interpersonal reactions in Soviet Russia?

5.  Discuss the notion of selfhood and identity, and how those concepts are expressed differently in a capitalistic and a communistic society. How does the communist system as described in The Noise of Time discourage assertion of the self? How does Shostakovich’s relationship with Power create a sort of “fractured self,” in which his private and public identities are at odds with each other?

6. Describe the evolution of Shostakovich’s perspective on romantic love. Why does he subscribe to the idea of Free Love as a young man? What changes his perception of it?

7. In the first section of the book, it is revealed that Shostakovich’s parents intended to name him Yaroslav rather than Dmitri. How did you interpret this revelation? How does the question that follows on page 8—­“What did a name matter?”—­relate to Shostakovich’s own conception of selfhood as explored throughout The Noise of Time?

8. Throughout the novel, Shostakovich seemingly views himself as a puppet of Power. How does he differentiate himself from Power—­particularly when he submits to the Party’s will? What does he view as his greatest rebellion?

9. Discuss Shostakovich’s relationship with his first wife as compared to his subsequent ones. What does he value in a marriage? How is he affected by the loss of Nita?

10. Throughout The Noise of Time, Shostakovich is placed in social situations in which he must publicly denounce cultural institutions, capitalistic policies, and the careers of his fellow artists and musicians. Which public denunciation causes Shostakovich the greatest distress? How does public opinion toward Shostakovich shift over time?

11. How would you describe Shostakovich’s relationship with his children? What example does he try to set as a parent?

12. Discuss Shostakovich’s trip to the United States in Part II. What surprises him most about the United States? As a reader, did you ever get a sense that he was going to go “off script” and rebel against Power?

14. What would you say is Shostakovich’s lowest point in The Noise of Time? His greatest regret?

15. How is the relationship between art and power explored in The Noise of Time? Discuss Shostakovich’s own creative process and his creative goals. How is Power’s mandate that art must be “for the people” in direct opposition to the creative process?

16. Were you familiar with Shostakovich’s work prior to reading The Noise of Time? If so, how did this novel help to contextualize his music? If not, are you now interested in seeking out more information about his career?

Julian Barnes is the author of twenty previous books. He has received the Man Booker Prize, the Somerset Maugham Award, the Geoffrey Faber Memorial Prize, the David Cohen Prize for Literature and the E. M. Forster Award from the American Academy of Arts and Letters; in France, the Prix Médicis and the Prix Femina; and in Austria, the State Prize for European Literature. In 2004 he was named Commandeur de l’Ordre des Arts et des Lettres by the French Ministry of Culture. His work has been translated into more than forty languages. He lives in London.
Learn More About The Noise of Time
print

One Day in the Life of Ivan Denisovich
Alexander Solzhenitsyn