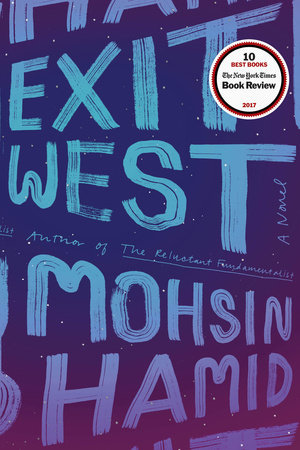 1. “It might seem odd that in cities teetering at the edge of the abyss young people still go to class . . . but that is the way of things, with cities as with life,” the narrator states at the beginning of Exit West.  In what ways do Saeed and Nadia preserve a semblance of a daily routine throughout the novel? Why do you think this—and pleasures like weed, records, sex, the rare hot shower—becomes so important to them?

3. Early in Exit West, Saeed’s family spends a pleasant evening outside with their telescope, until “the sound of automatic gunfire, flat cracks that were not loud and yet carried to them cleanly. They sat a little longer. Then Saeed’s mother suggested they return inside.” How do we see the city changing around Saeed and his family? What effect does the subtle acceleration of violence have on the reader? On the novel itself?

4. What function do the doors serve, physically and emotionally, in the novel? Why do you think Hamid chose to include this speculative, fantastical element in an otherwise very “realistic” world?

5. In an interview with Paste magazine, Hamid says, “It’s strange to say, but I really believe in these doors. . . . I think the doors exist in our world, just not the physical manifestation that I’ve given them [in the novel].” What do you think he means? Contrast this with the way he writes about technology in Exit West, as in this passage about smart phones: “In their phones were antennas, and these antennas sniffed out an invisible world, as if by magic, a world that was all around them, and also nowhere, transporting them to places distant and near, and to places that had never been and would never be.”

6. When it becomes clear that Nadia and Saeed will need to flee their city, Saeed is most fearful over leaving behind his family, his friends, the only home he’s ever known, while Nadia is most concerned about the possibility of losing her autonomy, of being forced to rely on the uncertain mercy of others, of being “caged in pens like vermin.” Why do you think their respective fears are so radically different? What do these fears say about them as characters, and in relation to each other?

7. The city where Nadia and Saeed live and from which they flee is unnamed, the only unnamed location in the book. Why do you think that is? What effect does this omission have on the reader?

8. “War in Saeed and Nadia’s city revealed itself to be an intimate experience,” the narrator states. In what ways are violence and intimacy linked throughout the novel? How does violence bring Saeed and Nadia together? How do you think their relationship might have evolved if their city had never been under siege?

9. Saeed tells Nadia, “‘The end of the world can be cozy at times.’ She laughed. ‘Yes. Like a cave.’” What purpose does humor serve in a book like this?

10. With regard to her changing neighborhood, the old woman in Palo Alto muses, “When she went out it seemed to her that she too had migrated, that everyone migrates, even if we stay in the same houses our whole lives, because we can’t help it. We are all migrants through time.” What do you think she means?

11. Do you think Exit West is a hopeful book? Why or why not?
Learn More About Exit West
print

The Book of Longings
Sue Monk Kidd
Back to Top