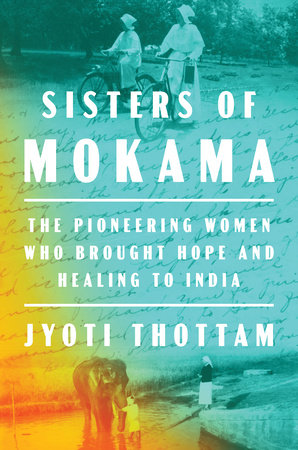 1. In her introduction, Thottam writes, “My mother remembers the sisters with a mix of emotions: they were strict and enforced their rules mercilessly, they were tall and pale, they spoke with incomprehensible accents, they were uncompromising in their standards, they taught her everything she knows about nursing, they looked after her for years, they indulged her, they changed her life.” Over the course of the book we see the nuns break with the traditions of their order and take immense risks, all while remaining faithful to their mission. Did you have any preconceptions about a nun’s life and work? If so, how did they evolve over the course of the book?

2. Sisters of Mokama offers readers a chance to see the first twenty years of post-Partition India through the eyes of some of its women, both American and Indian. They witness a massive refugee crisis, political turmoil, and extreme poverty. Did this perspective make you think about Partition differently? What did you know about this era of Indian history before you began reading?

3. The term “white savior” is often used to describe white people who “help” non-white people in a self-serving way; foreign missions to poor, non-white areas are often criticized for this very reason. Did you think that the white American nuns embodied this problem when they came to Bihar? Why or why not?

4. Although this is a work of nonfiction, it is in many ways driven by its characters, who experience joy, heartbreak, love, success, and failure at Nazareth Hospital. Did you have a favorite character? Why?

5. What did you think of the nuns’ decision to forbid the young Indian novices and nursing students from speaking Malayalam or forming close friendships with one another? Would you have done the same? If you’ve ever experienced homesickness in the past, how did you manage it?

6. The majority of this book is written in third person—with the exception of Thottam’s introduction and the end of the book, where she writes about her own personal connection to the story. What did you think of her decision to keep herself out of the narrative? Were you surprised to find out which of the women was her mother?

7. All of the characters in the book demonstrate incredible grit, strength, and resourcefulness, from Crescentia’s makeshift solution to provide the hospital with distilled water to Bridget’s insistence on going to Nazareth Hospital and becoming a novice despite her father’s objections. Did you find these women inspiring?

8. Thottam includes an extraordinary amount of detail in the book about what daily life was like for the people of Nazareth Hospital. Is there anything else you wish you could know? If you could interview one character, who would it be, and what would you ask them?

I Should Have Honor

Take This Bread
Back to Top