The Vineyards of Champagne Reader’s Guide 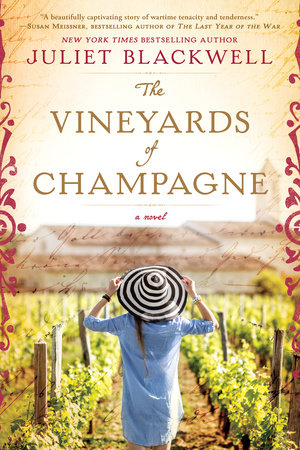 The Vineyards of Champagne Reader’s Guide

THE VINEYARDS OF CHAMPAGNE by Juliet Blackwell
Questions for Discussion

1.       If you could have coffee with one character from the novel, who would it be and why? What would you like to discuss with this character?

2.       Would you say the dominant theme of The Vineyards of Champagne is about love or about loss?

3.       In the first part of the novel, Rosalyn is searching for a “hermitage.” What does she mean by that? What are the benefits of her retreat and what are the drawbacks? Have you ever felt or experienced a similar inclination?

4.       How would you characterize Rosalyn’s relationship with Dash? Why was she angry with him? Was that anger justified?
5.       In what ways were the challenges Rosalyn faced unique to her personality and circumstances? In what ways were they similar to what many women face as adults?

6.       Did you find Rosalyn’s story depressing, uplifting, or some combination of the two?

7.       Wartime is horrific in so many ways, but—like grief—it sometimes reveals new depths of character and strips away falseness. Without romanticizing the past, can you think of any positives to living through a war?

9.       Were there any characters you didn’t like? If so, what was it that you found unappealing?

10.   The working title for this novel was “The Widows of Champagne.” How has widowhood affected characters other than Rosalyn, such as Doris and Lucie and other war widows, or the “Champagne widows” Louise Pommery and Barbe-Nicole Clicquot?

11.   Grief is an intensely personal experience. Does Rosalyn’s journey ring true given your own experience of loss and mourning? If not, how does it differ?

12.   Why do you think Lucie and her family decided to remain in Reims after the war began? What do you think you would do if faced with a similar scenario?
13.   What did you think of Blackwell’s use of language? Did the characters “sound” different from one another in your mind?

14.   Since The Vineyards of Champagne is set in France, did you like that the author included French words and phrases?

15.   Imagine you were in Lucie’s situation. How do you think you would have coped with the confinement and the lack of natural light and fresh air while living in the caves under the House of Pommery? How would caring for your family and handling daily needs pose new challenges? What would have sustained you?

16.   What did you know about the First World War before reading this novel? About the city of Reims or the process of champagne making? What was the most interesting or surprising thing you learned from reading the book?

17.   The Vineyards of Champagne deals with female friendship, specifically that of the somewhat offbeat trio of Rosalyn, Emma, and Blondine. How is each character influenced by her friendship with the other two?

18.   If you were making a movie of The Vineyards of Champagne, who would you cast for each role?

19.   Have you ever run into a problem in a foreign country and ended up “stranded”—for instance, in need of gas without a functioning credit card? How did you feel in that moment, and how did you find a solution? In what ways does it feel different to be stranded abroad compared with encountering difficulties in one’s own country?

20.   Lucie says that her mother sees beauty in necessity, whereas Lucie sees a necessity of beauty. What do you think she means by that? Which perspective better reflects your own?

21.   Have you ever visited the Champagne region and/or traveled to another part of France? Did the cultural aspects of the book feel true to life for you? Did anything feel different compared with your own travel experience? For instance, did you notice an obsession with preparing and eating dinner?

22.   Emma’s great-great-aunt Doris was embittered and disappointed by life but found new purpose as a marraine de guerre. How did Doris’s connection to Emile, and then to Lucie, offer her a kind of redemption?

23.   The Champagne region of France has been a theater of war for many centuries. What impact do you think such a history has on the people who live there, and on the regional psyche? How might such a legacy resonate through generations?

24.   The women living under Reims brought in the harvest every fall despite the dangers, hoping their champagne would be a “Victory Vintage” that would be ready to drink after the war had ended. Why do you think they took such big risks?

25.   What do you think Rosalyn decides to do at the end of the book, after finishing the harvest? Does she remain in France, return to Napa, or make a different decision entirely? What do you wish for her—and for Jérôme?

What Red Was
Rosie Price
Back to Top