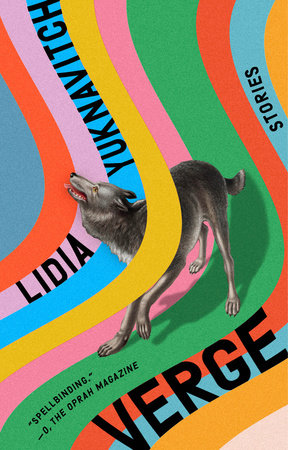 1. The opening story of Verge, “The Pull,” is about two sisters who must leave their home country. A later story, “Second Language,” is about a woman from Eastern Europe trying to make a new life in the United States. How do these stories about migration differ, and how are their visions related?

2. Body parts—hands, organs, eyeballs, arms—play a prominent role throughout the book. What ideas did you draw from this about the human body, what it represents, and what it is worth? How important are our bodies to our sense of identity? To the way we navigate, and survive, the world?

3. In “Street Walker,” the narrator remarks that while she and her partner have left behind serious addictions, they have accepted “the easy, low-key addictions of homeowners.” Given this story, and the later one “Shooting,” about another ten-year addiction, what might Yuknavitch be trying to say about the role addiction plays in our lives, and how we encounter it in different contexts? Do you agree with the narrator of “Street Walker,” who thinks, “If we didn’t have junkies, we wouldn’t have art?”

4. The book explores people’s relationships to their environments, to their limitations, and to others. What ideas about agency did you draw from these relationships? Which things are in our control, and which aren’t? What power and potential do we have to change and help the people around us?

5. In the story “The Garden of Earthly Delights,” the character Bosch finds a deep connection with a man named Aram, while flashbacks show snippets of his childhood and his relationship to his mother. How do Bosch’s childhood experiences with violence and loss color his adult life? The story is named for Hieronymus Bosch’s celebrated painting; what kind of “garden of earthly delights” could the title be referring to in the character’s life?

6. Animals appear throughout the book. In “A Woman Object (exploding),” the protagonist observes people at a party transforming into animals. How does this story blur the line between human and animal, and does it align with the way other animals appear in other stories? Are humans depicted as animals, or do they have animal elements? What is the difference?

7. Various stories in the collection allude to the way money and markets lead to dehumanization: “The Organ Runner,” “Second Language,” and “Drive Through” are three pointed examples. In what ways does capitalism lead to mistreatment? How do Yuknavitch’s characters resist these forces, and how are they complicit?

8. In the story “Cusp,” a young woman becomes a regular visitor at a prison near her house. At the end, as she’s being pinned to the ground, she cries out, “He loved me, he did, forty thousand brothers could not with all their quantity of love make up the sum!”—a nearly verbatim reference to Hamlet’s expression of love for the doomed Ophelia. Who do you think the protagonist is thinking of when she cries out? What connections do you see between Shakespeare’s plays and this story?

9. In “A Woman Apologizing,” the protagonist takes a great physical risk as a way of repairing her relationship with her partner. How does the physicality of her apology reflect the emotional components of apologizing to someone? What does her position at the end of the story tell us about apologies, and what do you imagine happens after the story ends?

10. Verge is full of glimpses and fragments depicting women on the edge. What do these fragments evoke for you? What do they fail to resolve? Are they all about one woman? All women? Certain kinds of women? What do the stories say about the space of “woman” in our shared environment?

11. Verge ends with “Two Girls,” an incantatory, almost poetic story about two sixteen-year-old girls. What effect do the story’s repeated motifs have on its meaning? How do the story’s tone and energy shape the end of the collection? What links can we draw from the image of these two girls at the end of the book, coming after the two sisters at its beginning?

12. Personal transformations play a key role in Verge. How do Yuknavitch’s characters handle growth and change? Can changing oneself always be for good, despite obstacles or resistance from others? Are there times when we should resist changing? Why or why not?

The Encyclopedia of Sandwiches
Susan Russo

Days in the History of Silence
Merethe Lindstrom

Until the Lions
Karthika Nair

Who Cut the Cheese?
Jim Dawson

The Simple Feeling of Being
Ken Wilber

Death of a Salesman
Arthur Miller
Back to Top