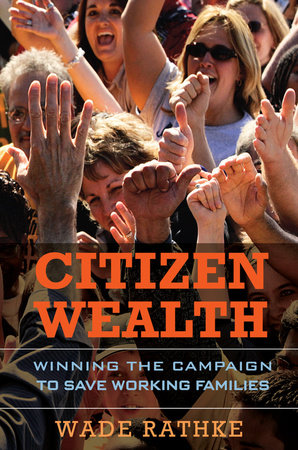 Winning the Campaign to Save Working Families

From the founder of ACORN, the nation’s largest grassroots community organization, comes this hard-hitting blueprint for helping working families establish a solid foundation of income and assets that equals true economic security—what Wade Rathke calls citizen wealth. Through compelling stories from the trenches of local, state, and national campaigns, where hardscrabble wins and smart negotiating have produced positive economic change for millions, Rathke shows how activists, government, business, and working people can join together to make citizen wealth a major priority and a visible reality.

“No one knows better than Wade Rathke how to organize everyday Americans to win economic and political power. Now he has taken his fourty years of hard-won experience and given us the book and the understanding we need to turn around America and lay the foundation for a sustainable economy for our future."
–Stewart Acuff, Director of Organizing, AFL-CIO

“This is one of those rare books that magically appear when desperately needed. Wade Rathke describes an approach that has worked to build a better life for literally millions and does not depend on the outcome of the last election. I have learned so much from Wade Rathke that has helped me win critical battles, and so can you.”
–Michael Kieschnick, President and cofounder, Working Assets

"Wade Rathke shares insights and experiences from his fourty years of organizing and offers a grassroots strategy to combat economic injustice.  Invaluable!"
—Robert Fisher, Professor of Community Organization, University of Connecticut, and author of Let the People Decide

“Citizen Wealth takes us on a remarkable journey through our recent 'gilded age,' witnessing the myriad efforts of ACORN and many others to counter the sly, often dishonest, ways that unscrupulous business interests exploit low and moderate-income people. But Rathke doesn't fall into polemics; instead, he tells stories—and damn good ones—about how activists and businesses worked out win-win partnerships that helped strengthen our communities.”
—Drummond Pike, CEO, Tides Foundation

Preface
Introduction: From the Bottom Up