The Colors of All the Cattle Reader’s Guide 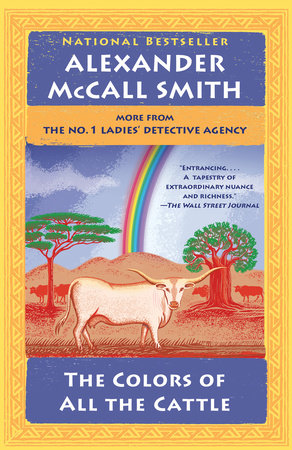 The Colors of All the Cattle Reader’s Guide

print
The Colors of All the Cattle Reader’s Guide

The nineteenth installment of this beloved series finds Mma Ramotswe finds herself persuaded to run in a local election. She also has to contain Charlie, who is trying to prove himself a good detective—and a good man.

When Mma Potokwane suggests to Mma Ramotswe that she run for a seat on the Gaborone City Council, Mma Ramotswe is unsure until she learns that developers plan to build the flashy Big Fun Hotel next to a graveyard. Her opponent is none other than Mma Makutsi’s old nemesis Violet Sephotho. Violet is intent on using every trick in the book to secure her election, but, for her part, Mma Ramotswe refuses to promise anything beyond what she can deliver.

Meanwhile, to impress a new girlfriend, Charlie volunteers to take on the role of lead investigator in a case for an old friend of Mma Ramotswe’s late father. With Charlie’s inquiries landing him in hot water and Election Day fast approaching, Mma Ramotswe will have to call upon her good humor and generosity of spirit to help the community navigate these thorny issues, and prove that honesty and compassion will always carry the day.

1. The women’s magazine Mma Makutsi reads to Mma Ramotswe challenges a person’s achievements in life and suggests that if a person has not accomplished much, their life is pointless. Mma Potokwane dismisses the magazine as rubbish, but how does the article affect Mma Ramotswe? What do you think about this idea?

2. Why does Mma Ramotswe demur when Mma Potokwane first suggests Precious run for a seat on the council? What changes her mind?

3. What is Mma Ramotswe’s main motivation for being on the Gabarone town council?

4. Have you ever run for public office? What was your motivation to do so?

5. What is the Big Fun Hotel, and what are the positives and negatives presented regarding it?

6. Despite Precious’s reservations, she continues to allow herself to be persuaded by Mma Potokwane and Mma Makutsi to continue with the race. Where does she drawn the line as far as other people making decisions for her?

7. What does Mr. J.L.B. Matekoni think of his wife’s political aspirations?

8. How has the character of Charlie transformed throughout the series? How are these changes reflected in this installment?

9. Mma Ramotswe trusts Charlie to make inquiries into the case of Dr. Marang’s hit-and-run. How does this affect Charlie?

10. How was Dr. Marang’s case resolved? Do you think the perpetrator received an appropriate punishment?

11. How is Mma Ramotswe’s approach to solving cases different from Mma Makutsi’s or Charlie’s?

12. Why doesn’t Queenie-Queenie tell Charlie about her family? Should she be more open to him? How does it alter the way he treats her when he finds out?

13. What do Mma Makutsi’s shoes tell her? Do you think she listens to them?

14. What causes Mma Makutsi and Phuti Radiphuti to argue? Who do you think is correct, and why?

15. Despite Violet Sephotho’s tactics, how does Mma Ramotswe win the election?

16. What happens at the first town council meeting Mma Ramotswe attends as a council member? What do you think of this outcome?

17. In the end, Mma Ramotswe’s career in politics is short-lived. Do you think she would have made a good council member? Is it possible to be bad at politics but good at representing constituents?

18. Why does Mma Ramotswe invite Charlie to stay in her home? How is this in keeping to her character?

19. Mr. J.L.B. Matekoni tells his wife: “You are a heroine, Mma. You are an eighty-four-horse-power, six-cylinder heroine—you really are.” That’s the greatest compliment he can give. What’s the best compliment you’ve ever received?

20. What is the significance of the title?

ALEXANDER McCALL SMITH is the author of the No. 1 Ladies’ Detective Agency novels and a number of other series and stand-alone books. His works have been translated into more than forty languages and have been best sellers throughout the world. He lives in Scotland.
Learn More About The Colors of All the Cattle
print

The Lost Art of Gratitude
Alexander McCall Smith
Back to Top