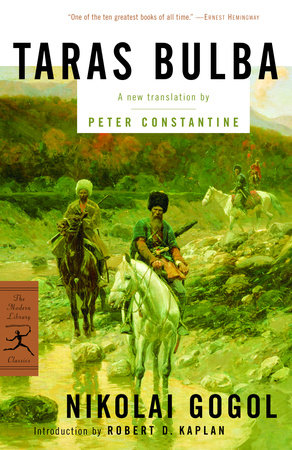 1. What is the significance of brotherhood for the Cossacks? What does it require? Who does it include and who does it exclude?

2. The theme of love doomed by ethnic and religious divisiveness appears and reappears in literature across cultures. In what ways is the tale of Andri’s love for the governor’s daughter both similar to and different from the classic tales of forbidden love?

3. In his Introduction, Robert Kaplan explains the violence of the Cossacks through exploring modern concepts like group-think and the dialectical relationship between civilization and anarchy. Discuss the work in terms of your knowledge of sociological and psychological theory.

4. What can you deduce about the values of sixteenth- and seventeenth-century Russians from Gogol’s work?

5. Discuss the differences between the way the Cossacks think of and treat the following ethnic groups: the Catholic Poles, the Muslim Turks and Tatars, and the Jews.

6. Compare and contrast Taras Bulba to other classic war epics, including the Homeric.

7. How are history, heritage, camaraderie, and pride important to both the story and Gogol’s crafting of the text?

8. How does Taras Bulba react to losing each of his sons, and what does this say about his character and his culture?

9. Discuss Gogol’s portrayal of the governor’s daughter and her maid–the only two women and Tatars to play such an important and personal role in the book. Is it signi•cant that we do not learn their names?

10. By explaining the human impulses behind religious, ethnic, and national rivalries; war; and even terrorism, Kaplan universalizes Taras Bulba and relates its speci•c historical context to the modern state of international affairs. Explore the Cossack revolt against the Poles and warfare with the Tatars in relation to modern religious and ethnic violence.

The All-True Travels and Adventures of Lidie Newton
Jane Smiley

The Return of the Soldier
Rebecca West