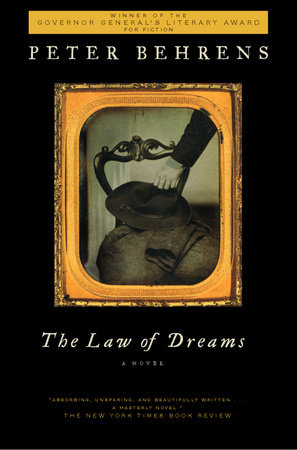 About The Law of Dreams

On his odyssey through Ireland and Britain, and across the Atlantic to “the Boston states,” Fergus is initiated to violence, sexual heat, and the glories and dangers of the industrial revolution. Along the way, he meets an unforgettable generation of boy soldiers, brigands, street toughs and charming, willful girls—all struggling for survival in the aftermath of natural catastrophe magnified by political callousness and brutal neglect.

Peter Behrens transports the reader to another time and place for a deeply moving and resonant experience. Winner of Canada’s top literary prize, The Law of Dreams is gorgeously written in incandescent language that unleashes the sexual and psychological energies of a lost world while plunging the reader directly into a vein of history that haunts the ancestral memory of millions in a new millennium.

“Behrens’s impressive, swiftly paced saga tracks the life of an Irish boy after his family dies during the Great Potato Famine . . . In scope and subject, Behrens’s work recalls Liam O’Flaherty’s epic novel Famine; both writers have a stark style admirably suited to conveying the horrors of starvation and despair. But Behrens’s language also has a visceral rhythm, and his similes meld the humble with the lyrical: whales rise ‘hissing’ in a river, light ‘stutters’ off an iron roof.”
—The New Yorker

“Behrens writes about the famine and its consequences as if he were an eyewitness. The Law of Dreams is absorbing, unsparing and beautifully written . . . His writing is seamless, and often gorgeous. He is adroit at creating indelible characters in a few deft strokes . . . What Behrens knows, what he teaches us again in this masterly novel, is that the past was indeed wondrous, and terrible and strange, but that it was a very real place.”
—The New York Times Book Review

“Stunningly lyric . . . a work of richly empathetic imagination that reminds us once again of how powerful historical fiction can be in skilled hands.”
—Los Angeles Times

“Extraordinary . . . a novel that animates the past this vibrantly should make volumes of mere history blush.”
—The Washington Post Book World

“Inspired by his own family history, Behrens has fashioned a paean to the strength of the human spirit that illuminates a piece of history. The law of dreams is to keep moving, and that’s what Fergus does, taking advantage of opportunities even as he is haunted by dreams and hurt by betrayal. Behrens tells this story in spare prose that distills ideas to their essence, making this absorbing historical fiction.”
—Booklist

“Fergus’ Atlantic crossing is one of the great set pieces in The Law of Dreams, all the more remarkable because we’ve seen it before, in almost every chronicle of the Irish diaspora. Behrens spares nothing when it comes to the dread and discomfort of the passage. At the same time, the details of shipboard life—say, a sailor high in the rigging—strike Fergus as portents of liberation: ‘He’d rather be living up there, in the high, than down below in the hold. All his life he had lived in holes of one sort or another; cabins made of stones and turf; scalpeens made of sticks, shanties, steerage holds. Burrows smelling of earth and bodies.’ Will America offer him an escape from this burrow, which is also the downward tug of death and memory? Will the New World transform him? The answer is twofold. Fergus does lose his innocence, what little there is left of it. For a dizzying moment his very appetite for experience seems on the verge of disappearing: ‘I have eaten too much of the world. I am not hungry no more.’ In the end, though, the law of dreams will not relinquish him. He must keep moving. Happily, this mandate of eternal motion applies to the author as well. He never lets his story go slack, never lets it eddy on the margins for more than a page or two. Then Fergus is carried along once again. This is not a matter of streamlined minimalism: No, Behrens has fashioned a beautiful idiom for his book, studded with slippery archaisms and mournful, musical refrains . . . The language and the things it describes seem to be spun out of a single material. And we move through it as willingly, or compulsively, as the protagonist, the wind of love and hate at our backs.”
—Newsday

“Peter Behrens’s historical novel about the 19th century Irish potato famine, has left critics grasping for words to convey what makes it such an astonishing piece of work. Beautifully written, [and] more adventure story than melodrama.”
—The Santa Barbara Independent

“Sprawling, cinematic, exquisitely detailed, exactingly researched, and keenly felt . . . a powerful work of excavation that achieves what historical fiction often can’t–credibility, along with a sense of the transportive.”
—Boston Phoenix