Paris to the Moon Reader’s Guide 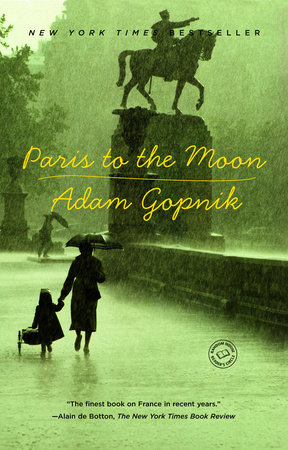 Paris to the Moon Reader’s Guide

1. Questions for Dis cussion
1. Throughout Paris to the Moon, Adam Gopnik seems to be writing about small things—Christmas lights, fax machines, children’s stories—but he tries to find in them larger truths about French and American life. Can the shape of big things be found by studying small ones? Is it really possible to “see the world in a grain of sand”? What overlooked small things in our American life seem to resonate with larger meanings?

2. Although composed of separate essays, the book follows a thread toward a larger meaning: that the “commonplace civilization” of Paris is beautiful but its official culture is often oppressive. What kinds of evidence, small and large, does Gopnik collect to illustrate this idea? In “Papon’s Paper Trail,” how does this lighthearted observation turn serious? In the chapters about the Balzar wars, how are the author’s feelings finally resolved?

3. Can we find a similar distinction between “civilization” and “official culture” in America? Do you agree with the notion Gopnik alludes to in “Barney in Paris” that media culture is our official culture? Do you think his urge to “protect” his child from the “weather on CNN” in favor of the “civilization of the carousel” is admirable or foolish?

4. Although Paris to the Moon is not a novel, it has a novelistic shape, with characters we come to know. Are there “secret stories” in the book? Does Gopnik want us to sense something about the development of his feelings about his child? About his wife? Has the narrator changed or matured by the end? In what way are “all chords sounded” by the birth of a new child?

5. “The Rookie” is one of the most popular stories in the book. Why do you think this is so? The author seems to be saying that American life gives the “gift of loneliness”; do you agree? If you were away from home for a long time, what elements of American culture do you think you would miss?

6. Throughout the book, Gopnik compares France and America. What are the most frequent points of comparison? Where do you think he favors America, and where France? Which do you favor?

7. At the end of Paris to the Moon, when the family decides to return to America, Martha says, “In Paris we have a beautiful existence but not a full life, and in New York we have a full life but an unbeautiful existence.” The author has said that this distinction is central to his experience of being an expatriate. Do you think it’s a valid distinction? Given the choice, which would you prefer?


Further Reading
Books about Paris and France stretch out to the end of the horizon, and fill libraries. But the subcategory of books about Americans in Paris is smaller, and still choice. Of twentieth-century books, A. J. Liebling’s Between Meals:AnAppetiteForParis is pure gold, as is his The Road Back to Paris. Janet Flanner’s Paris Journals are collections of her letters from Paris for The NewYorker, and are full of condensed, stylized French history.Henry James’s A Little Tour in France is the classic literary guidebook, and James Thurber’s wonderful stories of his mishaps in France are included in MyWorld andWelcome to It and in The Thurber Carnival, particularly the stories “A Ride with Olympy” and “Memoirs of a Drudge.” Ernest Hemingway’s A Moveable Feast is probably the most famous twentieth-century Paris memoir, though it is more aboutAmericans than about Paris.
Novels about Americans in Paris make up an even longer and richer list. They include Henry James’s The American and The Ambassadors. Hemingway’s The Sun Also Rises is the classic story of American expatriates in Paris in the 1920s, and in Irwin Shaw’s Collected Stories there is many a glimpse of American expatriates in the 1950s. F. Scott Fitzgerald’s “Babylon Revisited” is probably the saddest and most beautiful story about an American in Paris after the crash—and the fall.
Finally, George Gershwin’s great tone poem “An American in Paris,” which is heard often in the background of Paris to the Moon, has been recorded many times. The best version is Leonard Bernstein’s 1959 recording, made with the Columbia Symphony Orchestra; it is available on CD. Gershwin’s piece was the basis for a not-bad Gene Kelly movie directed by Vincente Minnelli, widely available on video.

Learn More About Paris to the Moon
print
Back to Top