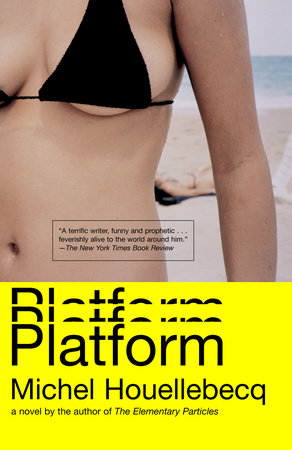 “A terrific writer, funny and prophetic . . . feverishly alive to the world around him.” —The New York Times Book Review

Michel Renault is a civil servant, forty years old and numb to the world. When his father is murdered Michel’s response is a contemptuous sneer. He has no lover, no close friends, and almost no real interest in either his own life or the lives of those around him. Acutely aware of the hollowness at the core of western culture, Michel has no illusions about his own worth, describing himself as “good for nothing” and a “parasite.” That Houellebecq can make the fate of such a narrator so compelling is one of the remarkable feats of Platform.

After his father’s death, Michel embarks on a Thai Tropic tour, where he indulges his enthusiasm for Thai prostitutes, makes wry observations about the social habits of his fellow tourists, and keeps his distance from Valérie, a young employee of the tour company who, for reasons he cannot quite fathom, seems interested in him. Back in Paris, however, they fall into an erotically charged relationship, and Michel experiences intimacy he had all but banished from his life. They move through the Parisian avant-garde art scene and sex clubs, but as Valerie climbs higher and higher in tourism industry, they are drawn back to Thailand. Michel invents a scheme to revive the struggling chain of hotels for which Valérie now works. His idea is to bring third world poverty and the dissatisfactions of western men into a fruitful union of expanded sex tourism. Michel’s plan turns out to be highly successful, but not everyone is happy about it, and as the novel pushes towards its dramatic conclusion, Michel feels the full force of the violent antipathy his idea has created.

In the tradition of Camus and Dostoevsky, Houellebecq has written a novel unflinching in its depiction of a world where not even capitalism, art, literature, religion, travel, or sex can offer any lasting escape from the bleakness of the human predicament.

1. What kind of narrator is Michel Renault? How does he view the world? How is he different from the narrators of most contemporary fiction?

2. Michel admires Agatha Christie for her “Dickensian sense of wonder” and her depiction of despair: “This was despair—this utter outer darkness of coldness and loneliness. And the sin of despair, that priests talked of, was a cold sin, the sin of cutting oneself off from all warm and living human contacts” [p. 71]. Why does Michel find this passage so compelling? How does it illuminate his character and circumstance?

3. What is surprising about the way Michel reacts to his father’s death? What do his reactions reveal about his character, his history? Why does he think that his father’s death gives him “a certain freedom” [p. 62]?

4. When Aicha, his father’s cleaning woman, tells Michel, “I don’t want to disturb you,” he responds: “You’re not disturbing me. In fact, nothing disturbs me” [p. 5]. Where else in the novel do we see this kind of passivity from Michel? Why has he moved beyond the conventional emotional responses to his world? What events have made it impossible for him to be disturbed? Does he change over the course of the novel?

5. Why does Michel despise popular American novelists like Tom Clancy and John Grisham. How does he express his contempt for these books? In what important ways is Houellebecq’s approach to the novel different from such authors?

6. Valérie tells Jean-Yves “Do you really want to buy yourself a Ferrari cabriolet? A holiday home in Deauville, which will only get burgled anyway? To work ninety hours a week until you’re sixty? . . . The only thing the Western world has to offer is designer products” [p. 234]. In what ways can Platform be read as an indictment of the emptiness of western culture and western values? To what extent is Valérie right in her assessment of what the West has to offer and what it demands in return?

7. Some reviewers have criticized Platform for its apparent anti-Islamic sentiment. Is this a fair criticism? How are Muslims depicted in the book?

8. Michel describes himself dismissively throughout the novel: “What had I produced in the forty years of my existence? To tell the truth, not very much. . . . It would be easy to get by without people like me” [p. 63]. “I was perfectly adapted to the information age—that is to say, good for nothing” [p. 161]. How does Houellebecq manage to make Michel interesting to readers, in spite of his lack of interest in himself? In what ways can Michel be seen as an antihero?

9. Michel writes, “The minute they have a couple of days of freedom, the inhabitants of Western Europe dash off to the other side of the world . . . they behave—literally—like escaped convicts” [p. 20]. What inherent problems with tourism and the desire for travel does Platform explore? What is Michel’s solution to that problem? Why is his idea to expand sex tourism greeted with both enthusiasm and outrage?

10. At the end of the novel, Michel says, “If by chance it had been my intention, when I began writing these pages, to lessen the feeling of loss, or to make it more bearable, I would by now be certain of my failure: Valérie’s absence has never been more painful to me” [p. 256]. How has the knowledge of Valérie’s death colored the tone and mood of Michel’s writing? Why hasn’t writing eased his pain or provided any kind of enlightenment?

11. Why does Houellebecq write about sex so often and in such detail in Platform? What value does sex have in Michel’s life?

12. What are some of the funnier moments in Platform? How does humor fit into the darker fabric of the novel?

13. Platform has generated a good deal of controversy in France and elsewhere, with readers, critics, and fellow writers being sharply divided about both the literary merits of the novel and what some feel to be its deliberately offensive or shocking passages. What is it about the novel that has sparked this controversy?

14. When Valérie voices her incomprehension of masochism, Michel reflects that “the things people do, the things they are prepared to endure . . . there was nothing to be made of all this, no overall conclusion, no meaning” [p. 137]. Does Houellebecq intend his readers to view Platform in this way? Does the novel offer any larger meaning?

Michel Houellebecq’s The Elementary Particles, an international bestseller, won the prestigious Prix Novembre in France as well as the lucrative International IMPAC Dublin Literary Award. He lives in Ireland.

Georges
Back to Top