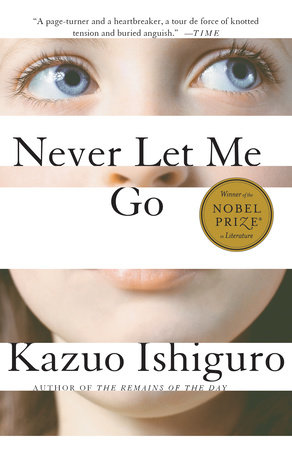 A thirty-one-year-old woman named Kathy narrates this haunting tale, drawing the reader gradually into her recollections of her life at Hailsham, the idyllic boarding school where she grew up. She and her best friends, Ruth and Tommy, were encouraged by their teachers to create works of art from an early age, to collect cherished objects, and to take good care of their health. There are no parents in their world, only a handful of teachers, some of whom seem to be deeply troubled by their position at the school. Kathy’s friend Ruth is bossy and manipulative, while Kathy herself is gentle and self-contained. Both are drawn to Tommy, a boy given to explosive fits of temper. What is revealed, as Kathy’s reminiscences accumulate, is a life of preparation for a special role in a world that has begun to exploit the medical possibilities of genetic technology. A tale of deceptive simplicity, Never Let Me Go slowly reveals an extraordinary emotional depth and resonance—and takes its place among Kazuo Ishiguro’s finest work.

1. Kathy introduces herself as an experienced carer. She prides herself on knowing how to keep her donors calm, “even before fourth donation” [p. 3]. How long does it take for the meaning of such terms as “donation,” “carer,” and “completed” to be fully revealed?

2. Kathy addresses us directly, with statements like “I don’t know how it was where you were, but at Hailsham we used to have some form of medical every week” [p. 13], and she thinks that we too might envy her having been at Hailsham [p. 4]. What does Kathy assume about anyone she might be addressing, and why?

3. Why is it important for Kathy to seek out donors who are “from the past,” “people from Hailsham” [p. 5]? She learns from a donor who’d grown up at an awful place in Dorset that she and her friends at Hailsham had been really “lucky” [p. 6]. How does the irony of this designation grow as the novel goes on? What does Hailsham represent for Kathy, and why does she say at the end that Hailsham is “something no one can take away” [p. 287]?

4. Kathy tells the reader, “How you were regarded at Hailsham, how much you were liked and respected, had to do with how good you were at ‘creating’” [p. 16]. What were Hailsham’s administrators trying to achieve in attaching a high value to creativity?

5. Kathy’s narration is the key to the novel’s disquieting effect. First person narration establishes a kind of intimacy between narrator and reader. What is it like having direct access to Kathy’s mind and feelings? How would the novel be different if narrated from Tommy’s point of view, or Ruth’s, or Miss Emily’s?

6. What are some of Ruth’s most striking character traits? How might her social behavior, at Hailsham and later at the Cottages, be explained? Why does she seek her “possible” so earnestly [pp. 159–67]?

7. One of the most notable aspects of life at Hailsham is the power of the group. Students watch each other carefully and try on different poses, attitudes, and ways of speaking. Is this behavior typical of most adolescents, or is there something different about the way the students at Hailsham seek to conform?

8. How do Madame and Miss Emily react to Kathy and Tommy when they come to request a deferral? Defending her work at Hailsham, Miss Emily says, “Look at you both now! You’ve had good lives, you’re educated and cultured” [p. 261]. What is revealed in this extended conversation, and how do these revelations affect your experience of the story?

9. Why does Tommy draw animals? Why does he continue to work on them even after he learns that there will be no deferral?

10. Kathy reminds Madame of the scene in which Madame watched her dancing to a song on her Judy Bridgewater tape. How is Kathy’s interpretation of this event different from Madame’s? How else might it be interpreted? Is the song’s title again recalled by the book’s final pages [pp. 286–88]?

11. After their visit to Miss Emily and Madame, Kathy tells Tommy that his fits of rage might be explained by the fact that “at some level you always knew” [p. 275]. Does this imply that Kathy didn’t? Does it imply that Tommy is more perceptive than Kathy?

12. Does the novel examine the possibility of human cloning as a legitimate question for medical ethics, or does it demonstrate that the human costs of cloning are morally repellent, and therefore impossible for science to pursue? What kind of moral and emotional responses does the novel provoke? If you extend the scope of the book’s critique, what are its implications for our own society?

13. The novel takes place in “the late 1990s,” and a postwar science boom has resulted in human cloning and the surgical harvesting of organs to cure cancer and other diseases. In an interview with January Magazine Ishiguro said that he is not interested in realism.* In spite of the novel’s fictitious premise, however, how “realistically” does Never Let Me Go reflect the world we live in, where scientific advancement can be seemingly irresistible?

14. The teacher Lucy Wainright wanted to make the children more aware of the future that awaited them. Miss Emily believed that in hiding the truth, “We were able to give you something, something which even now no one will ever take from you, and we were able to do that principally by sheltering you. . . . Sometimes that meant we kept things from you, lied to you. . . . But . . . we gave you your childhoods” [p. 268]. In the context of the story as a whole, is this a valid argument?

15. Is it surprising that Miss Emily admits feeling revulsion for the children at Hailsham? Does this indicate that she believes Kathy and Tommy are not fully human? What is the nature of the moral quandary Miss Emily and Madame have gotten themselves into?

16. Critic Frank Kermode has noted that “Ishiguro is fundamentally a tragic novelist; there is always a disaster, remote but urgent, imagined but real, at the heart of his stories” [London Review of Books, April 21, 2005]. How would you describe the tragedy at the heart of Never Let Me Go?

17. Some reviewers have expressed surprise that Kathy, Tommy, and their friends never try to escape their ultimate fate. They cling to the possibility of deferral, but never attempt to vanish into the world of freedom that they view from a distance. Yet they love the film The Great Escape, “the moment the American jumps over the barbed wire on his bike” [p. 99]. Why might Ishiguro have chosen to present them as fully resigned to their early deaths?

18. Reread the novel’s final paragraph, in which Kathy describes a flat, windswept field with a barbed wire fence “where all sorts of rubbish had caught and tangled.” She imagines Tommy appearing here in “the spot where everything I’d ever lost since my childhood had washed up” [p. 287]. What does the final sentence indicate about Kathy’s state of mind as she faces her losses and her own death—stoicism, denial, courage, resolution?

19. In a recent interview, Ishiguro talked about Never Let Me Go: “There are things I am more interested in than the clone thing. How are they trying to find their place in the world and make sense of their lives? To what extent can they transcend their fate? As time starts to run out, what are the things that really matter? Most of the things that concern them concern us all, but with them it is concertinaed into this relatively short period of time. These are things that really interest me and, having come to the realization that I probably have limited opportunities to explore these things, that’s what I want to concentrate on. I can see the appeal of travel books and journalism and all the rest of it and I hope there will be time to do them all one day. But I just don’t think that day is now.” How do these remarks relate to your own ideas about the book? [Interview with Nicholas Wroe, The Guardian, February 2, 2005.]

Kazuo Ishiguro was born in Nagasaki, Japan, and has lived in England since the age of five. He is the author of five previous novels, including The Remains of the Day, which won the Booker Prize and became an international bestseller. His work has been translated into twenty-eight languages. In 1995 he received the Order of the British Empire for service to literature and in 1998 was named a Chevalier de l’Ordre des Arts et des Lettres by the French government. He lives in London with his wife and daughter.

Breakfast of Champions
Back to Top