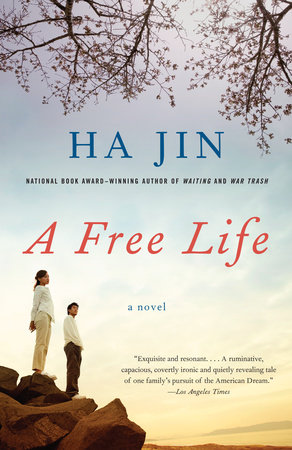 “Exquisite and resonant. . . . Jin has fashioned a ruminative, capacious, covertly ironic and quietly revealing tale of one family’s pursuit of the American Dream.”
—Los Angeles Times

The introduction, questions, and suggestions for further reading that follow are intended to enhance your group’s reading and discussion of A Free Life, the first novel set in America from Ha Jin, the widely acclaimed, award-winning author of Waiting and War Trash.

Nan Wu is a Chinese graduate student in political science at Brandeis University when the Tiananmen Square massacre changes everything for him. Because of his activity with a prodemocracy group, it is now impossible for him to return to China to take up the academic career he had been working toward. His wife, Pingping, is already with him in Boston; their six-year-old son, Taotao, who has been living with his grandparents in Jinan, is finally able to join them. Nan has not seen his son for four years, and Taotao doesn’t remember his father. Reunited now in exile, they must all begin a new life.

Nan soon decides that political science, the field of study assigned to him by the Chinese government, does not interest him-at heart, he wants to write poetry. He is haunted as well by thoughts of Beina, the woman who broke his heart in China. He knows he doesn’t truly love Pingping, but the economic survival of his family takes priority over all his private desires. He quits graduate school, and he and Pingping move to Atlanta, where they buy a small Chinese restaurant in a shopping mall. Slowly Nan develops his cooking skills and the restaurant thrives, but he is troubled by his continuing dissatisfaction with life. His poet friend Dick meanwhile, takes an academic job at Emory, and through him Nan learns what it means to survive as a poet in America—to win grants, to be published by a respectable press, to be invited to speak, and to read from one’s work. His daily work at the restaurant keeps him drained and uninspired. But the larger problem is that he must decide whether to write in Chinese or in English—he is caught between two languages, and each expresses a world of alienation for Nan.

In a narrative style that reflects the slow accretion of daily experience with the texture of events both large and small, Ha Jin masterfully and movingly presents the struggle—fraught with difficulty, anxiety, and exhaustion—of an immigrant family building a life in America.

1. From the beginning, the novel presents a structure of very short chapters. Why might Ha Jin have chosen this means of organizing his story, and what is its effect? In what ways does the pace of the novel reflect the rhythms of daily life?

2. What is likable about Nan’s character, and what is less so? Do his continuing infatuation with Beina, his lack of love for Pingping [pp. 23, 57–60], and his emotional distance from his son affect your opinion of him, and if so, how?

3. The use of language is an important focus of A Free Life. Ha Jin writes Nan’s mistakes and mispronunciations into the dialogue when Nan is speaking in English; when characters speak in Chinese their speech appears in italics. What is the effect of the occasional misuse or noncolloquial use of a word or phrase in English, as when Nan says, for instance, that Sam is “bibulous” [p. 260], that a poet is “well endowed” [p. 305], or when he says in a job interview that he and his co-workers “all got laid together” [p. 25]?

4. The Wus’ friendship with Janet and Dave Mitchell involves them in the emotional events of Hailee’s adoption from China, as well as the discovery and treatment of her leukemia. At one point Nan is amazed at how emotional Dave becomes when having to choose between two orphan girls; he thinks, “Probably it was their Christian faith that had instilled in them the sense of guilt and enabled them to commiserate with the babies more than they—the Wus—could” [p. 313]. Do you think Christianity is the reason for the Mitchells’ sensitivity? Does the episode suggest something about cultural difference or about Nan’s own powers of empathy?

6. When they deposit the $50,000 check and the woman at the bank looks at them strangely, Pingping realizes, “There was no way this woman could imagine the sacrifice and labor this check embodied” [p. 185]. Would you agree that most native-born Americans are no longer capable of the self-sacrifice and unremitting labor that the Wus engage in? What are the effects of a capitalist and consumerist economy on people’s values and behavior, as seen through the eyes of Nan and Pingping?

7. Throughout the story, Nan holds onto the memory of Beina and wants to see her again “in order to preserve her in his memory as a lovely woman beyond his reach, as someone who still possessed his soul, so that the flames of inspiration would blaze in him again” [p. 562]. How do his feelings change after he sees Beina in Illinois [pp. 586-90]?

9. When the Wus sell their restaurant to their friends Shubo and Niyan they are shocked to learn that Shubo won’t let Pingping work there [pp. 613–15]. What does this incident, as well as Nan’s later visit to his parents in China [pp. 557–60] make clear for Nan about the bonds of friendship and family? How does he respond to the celebration of Halloween in their suburban neighborhood [pp. 271–73], and why?

10. After paying off the mortgage on their house, Nan has a brief period of elation which is followed by a profound sense of disappointment: “The struggle had ended so soon that he felt as though the whole notion of the American dream was shoddy, a hoax. . . . He should feel successful. But somehow the success didn’t mean as much to him as it should” [p. 418]. What is the cause of his dismay? How is his distress affected by his conversation with Shubo about the idea that immigrants must sacrifice their own dreams for their children and grandchildren [pp. 420–21]?

11. Observing the culture of moneymaking on his trip to China, Nan thinks, “Now he wanted all the more to live and die in America. How he missed his home in Georgia” [p. 568]. Throughout the story, Nan has felt almost no nostalgia for his life in China. Is this lack of emotional connection to his native culture partly the reason that Nan is willing to risk writing in English? What had come to define “home” for Nan?

12. The story’s arc brings to Nan’s attention only belatedly what the reader perhaps already feels: that Pingping has proven herself from the beginning the stronger and steadier character. She has left her native country to be with a husband she knows does not love her, she accepts his moods and his anger, and she works daily with their son to make sure he succeeds at school. How do Pingping’s pregnancy and the loss of the baby girl affect their marriage [p. 469]? How does Nan come to realize Pingping’s worth [p. 612]? What does his poem “Belated Love” [pp. 619–20] express about his new knowledge?

13. How would you describe the prose style of the novel? What are the notable aspects of the narration and what kinds of details does it bring into focus? Do you assume that the narration is mainly from Nan’s point of view; is it a more objective third-person narration, or does it shift between the two?

14. Regarding his poetic vocation, Nan thinks, “The truth was that he had been frightened by the overwhelming odds against writing in English artistically, against claiming his existence in this new land, and against becoming a truly independent man who followed nothing but his own heart. To date he had tried every way to wriggle out of the struggle” [p. 472]. How do the poems at the end of the volume reflect Nan’s new independence? What does the “free life” of the title mean for him?

Ha Jin is available for select readings and lectures. To inquire about a possible appearance, please visit www.knopfspeakersbureau.com or call 212-572-2013.

The Solitude of Emperors
David Davidar

The House of Bilqis
Azhar Abidi

I’ll Be Strong for You
Nasim Marashi

A Curse on Dostoevsky
Atiq Rahimi

Gate of the Sun
Elias Khoury

The Inheritance of Loss
Kiran Desai

All Russians Love Birch Trees
Olga Grjasnova
Back to Top