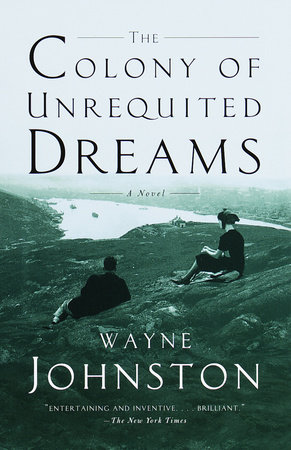 The questions, discussion topics, and author biography that follow are intended to enhance your group’s reading of The Colony of Unrequited Dreams–at once a mystery and a love story spanning five decades and an epic portrait of passion and ambition set against the beautiful, brutal landscape of Newfoundland. In this widely acclaimed novel Johnston has created two of the most memorable characters in recent fiction: Joey Smallwood, who claws his way up from poverty to become Newfoundland’s first premier; and Sheilagh Fielding, who renounces her father’s wealth to become a popular columnist and writer, a gifted satirist who casts a haunting shadow on Smallwood’s life and career.

The two meet as children in school and grow to realize that their lives are irreversibly intertwined, bound together by a secret they don’t know they share. Smallwood, always on the make, torn between love of country and fear of failure, is as reluctant to trust the private truths of his heart as his rival and savior, Fielding-brilliant, hard-drinking, and unconventionally sexy. Their story ranges from small-town Newfoundland to New York City, from the harrowing ice floes of the seal hunt to the lavish drawing rooms of colonial governors, and combines erudition, comedy, and unflagging narrative brio in a manner reminiscent of John Irving and Charles Dickens. A tragicomic elegy for the “colony of unrequited dreams” that is Newfoundland, Wayne Johnston’s masterful tribute to a people and a place establishes him as a novelist who is as profound as he is funny, with an impeccable sense of the intersection where private lives and history collide.

2. Joe is haunted by the sense of his own insignificance: "It seemed to me that unless I did something that historians thought was worth recording, it would be as if I had never lived, that all the histories in the world together formed one book, not to warrant inclusion in which was to have wasted one’s life" [p. 454]. Why does he feel this way? What is the relationship between the ambitions of Joe Smallwood and his paternal heritage of small-time shopkeeping, alcoholism, and failure? How do his experiences at Bishop Feild school affect his ideas about himself?

3. Johnston has created the structure of the book by interspersing Joe Smallwood’s first-person narrative with excerpts from Fielding’s journal, her History of Newfoundland, and her "Field Day" newspaper columns. What is the effect, as you read, of the interplay of these parts?

4. Smallwood’s conversion to socialism takes place after his haunting vision of the frozen bodies of the sealers who died on the ice. Would you say that his walk across the island to unionize the men is Smallwood’s most heroic act in the novel? How does the rest of his career compare with the scale of this exploit?

5. Returning to Newfoundland after five years in New York, Joe says, "It was as if I saw, for a fleeting second, the place as it had been while I was away, and as it would be after I was gone, separate from me, not coloured by my past or my perceptions. . . . A kind of hurt surged up in my throat, a sorrow that seemed to have no object and no cause, which I tried to swallow down but couldn’t" [pp. 211-12]. Why is this such a painful moment for him?

6. Johnston has given Joe Smallwood the role of protagonist and the main first-person narrative, but some reviewers have expressed the opinion that Sheilagh Fielding is a more compelling character. Is Fielding ultimately more admirable than Smallwood? Whose life story is more interesting?

7. Joe Smallwood is not mentioned in Fielding’s History, which ends in 1923 when Sir Richard Squires is prime minister. Why does Fielding end her history there?

8. Why does Smallwood’s marriage proposal to Fielding go awry? When he next sees her, she tells him with her customary irony that she has been "reduced to hermiting because you broke my heart" [p. 228]. How true is this statement? Why does Smallwood marry Clara Oates and not Fielding?

9. Freezing to death on the Bonavista branch line, Smallwood imagines his own obituary [p. 225]. What makes this scene so touching and so comical? Joe is saved by Fielding, who here as at other crucial moments makes herself indispensable. Does Smallwood perform the same function in her life? Is their relationship, on the whole, reciprocal in terms of giving and receiving?

10. Sir Richard Squires tells Joe, "Power is what you want, though I’ll never get you to admit it. You picked socialism because you thought it was your best way of getting ahead. . . . You’re not an artist, you’re not a scientist, you’re not an intellectual. All that’s left to you is politics" [p. 270]. How accurate is Sir Richard’s assessment of Joe’s character? Joe responds that "the distinguishing characteristic of the true socialist…was selflessness" [p. 271]. Do selflessness and self-interest necessarily conflict?

11. Some Canadian readers have been troubled by the liberties that Wayne Johnston has taken with the life of Newfoundland’s first premier. Is the book more purely fictional, and therefore more purely enjoyable, for American readers, for whom Smallwood is not a known entity? It appears, for instance, that Johnston created the character of Fielding wholly from his own imagination. Why do you suppose he decided that Fielding was needed as a counterpart to Joe Smallwood? What would the novel have been like without the presence of Fielding? What are the particular complications and pleasures of fiction that is based on, but not entirely true to, historical reality?

12. The mystery of the anonymous letter to The Morning Post is not solved until the end of the novel, and it keeps Smallwood in the dark about some of the motivations of Fielding’s character as well as her true feelings for him. How satisfying is the resolution of this issue? Does the revelation about Fielding’s father highlight aspects of her character, or explain in part why she has conducted her life as she has?

13. Why does Joe bring Judge Prowse’s A History of Newfoundland with him to New York City? What is the symbolic significance of this book for various characters in the novel?

14. Why does Johnston wait until late into the novel to reveal Fielding’s secret about what happened when she was sixteen? How does this revelation affect your understanding of Fielding’s character and her motivations up to this point? Would you say that Fielding is a selfless character?

15. Is confederation a defeat for Newfoundland? Would it have been possible for such a bleak and economically unpromising land to survive as an independent nation? Was Smallwood right to think that, since socialism had failed, confederation was the only way to improve the lives of the outlanders?

16. How would you compare the political ideals of the young Smallwood to those of the man who becomes premier of the island after confederation? Has his character changed? What about his core ethical beliefs? Why is he so susceptible to people like Valdmanis?

17. Several reviews have commented on the skill with which Johnston has succeed in creating a novel that is reminiscent of the work of Charles Dickens. If you have read David Copperfield or Great Expectations, how does The Colony of Unrequited Dreams compare with them? What aspects of this book make it so compelling and so memorable?

Learn More About The Colony of Unrequited Dreams
print

Up from Orchard Street
Eleanor Widmer

In the Skin of a Lion
Michael Ondaatje

In Paradise
Peter Matthiessen
Back to Top