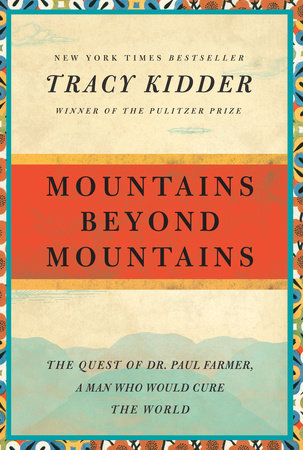 Teachers: If you’d like a printable version of this guide, download the PDF attachment at the bottom of this page.

Mountains Beyond Mountains: The Quest of Dr. Paul Farmer, A Man Who Would Cure the Worldtells the true story of one man’s commitment to bring quality health care to the world’s poorest communities. Author Tracy Kidder guides students through many physical and philosophical journeys with Dr. Farmer, eloquently articulating Farmer’s mission of correcting the inequities and epidemics that plague the poorest people. These journeys with Dr. Farmer constitute an adventure story focused on critical moral issues.

Mountains Beyond Mountains raises several profound questions about issues of access to health care and the global distribution of wealth, allowing students a glimpse into Dr. Farmer’s work to change the world. Reading this fascinating and inspiring book with your class will provide an opportunity to discuss critical modern political issues and will challenge your students to reflect on their own goals and personal philosophies.

This guide is divided into three categories: Style and Structure, Comprehension and Discussion, and Personal Essays. Questions in the first two sections can be used for oral discussion in small or large groups, or for written assignments. The Personal Essay questions will require longer, personal answers, and are more appropriate as written assignments. Each section can be individualized for your students’ interests and reading level, or adapted to meet curriculum demands.

Tracy Kidder was born in New York City in 1945. He attended Harvard College and served as a lieutenant in Vietnam. He writes frequently for Atlantic Monthly magazine and The New Yorker.

After briefly meeting Paul Farmer in Haiti in 1994, Kidder met up with him again in 1999 to begin work on “The Good Doctor,” a profile of Farmer that was published in The New Yorker in July 2000. Kidder’s research for The New Yorker article became the starting point for Mountains Beyond Mountains.

Tracy Kidder won the Pulitzer Prize and the National Book award in 1982 for The Soul of the New Machine, a book about corporate, high-tech America. Other works include House (1985), Among Schoolchildren (1989), Old Friends (1993), and Home Town (1999). His next book, My Detachment: A Memoir (due Fall 2005) focuses on his time spent as a lieutenant in Vietnam.

Style and Structure
1. Kidder opens Mountains Beyond Mountains with an account of a discussion between Paul Farmer and a U.S. army captain who was commanding a small peacekeeping force in Haiti. Farmer and the captain initially discuss a recent murder case in the area, and then move on to discuss the role of the U.S. in Haiti. While the U.S. Army troops had been stationed in Haiti to reinstate the country’s democratically elected government and to curb political violence, some of the soldiers were cynical about the effects of their presence in the country. In his reflections on the work of the soldiers, Kidder acknowledges that he shared the soldiers’ pessimism, believing that they “had done their best” and that they “would not cry over things beyond their control” in Haiti (page 8). Why do you think that Kidder opens his book with this scene?

3. The title of the book, Mountains Beyond Mountains, is taken from a Haitian proverb that translates as “beyond mountains there are mountains.” Why did Kidder use this as the title? What does it mean in terms of Paul Farmer’s work?

1. On his trips outside of Haiti, Paul Farmer carries two photos to show his colleagues–one of his own daughter Catherine, and one of a young patient at Cange (page 213). Why is it important to Farmer to show both photos?

2. In Chapter 22, Kidder notes that Paul Farmer’s “days and nights looked hard and in some ways lonesome.” Farmer is very dedicated to his work and has been very successful but in order to do his work, he has also made many personal sacrifices. What sacrifices has Farmer made to pursue his goals? How have these sacrifices affected his relationship with Didi and Catherine, and with his friends?

3. Paul Farmer had a very unusual upbringing in Massachusetts, Alabama, and Florida. What specific elements from his childhood and family life prepared Farmer for his current life? How has your upbringing influenced your own choices and goals in life?

4. Throughout the book, Kidder describes Farmer’s interactions with patients. In many cases, Farmer tends to reach out to touch his patients comfortingly and call them by pet names or endearments. Are these gestures typical of modern American doctors? How do these gestures reflect Farmer’s philosophy of the role of a doctor?

5. What motivates Paul Farmer to do the work he does? What does he see as his compensation? (page 24)

6. Farmer’s philosophy is at odds with standard notions of efficiency and cost-effectiveness. His approach to public health care has drawn criticism because it is not perceived to be cost-effective. For instance, one critic commented that the $20,000 spent on transporting a sick Haitian child to Boston for treatment could have been better spent on other things, like supplies or drugs for many other children (page 287). What is his response to these arguments? What factors do you think are most important in making such decisions about how money should be spent in public health programs?

8. What is meant by the phrase, “All suffering isn’t equal” on page 216? How does this belief shape the work that Paul Farmer, Jim Kim, and Partners in Health do?

9. As Partners in Health grows, Farmer is expected to travel to many places to implement and monitor programs, meet with policy-makers and other doctors, and make presentations on public health issues. His increasing involvement in other programs in Peru and Russia requires that he spend less time in Cange (page 260). How does he describe the inner conflict between serving his patients in Haiti and helping to solve international inequities and epidemics globally?

10. Many people in Cange believe that Paul Farmer “works with both hands,” meaning that he works both with science and with the magic necessary to remove Voodoo curses (page 27). How did he learn about the role of Voodoo in the lives of the residents of Cange? How does Farmer interpret the continuing presence of Voodoo in modern Haitian life?

11. Early members of Partners in Health refer frequently to an idea from the Catholic liberation theology movement, of “preferential option for the poor” (pages 78 and 81). How does Farmer’s life and work reflect this particular theology? What are some other examples of the role of faith and religion in Paul Farmer’s work?

Personal Essay
1. Do you think that Farmer has struck an appropriate balance between acting locally and acting globally? How do you think he should prioritize his responsibilities toward his Haitian patients, PIH’s other international programs, and the global public health community?

3. In many of his projects and activities, Paul Farmer achieves his goals by subverting policies. For example, while there is officially a fee for patient services at Zanmi Lasante, he has made a long list of exceptions, so that in fact almost no one has to pay for services (page 21). While he was in medical school, he “borrowed” tens of thousands of dollars worth of drugs and lab services from Brigham and Young Hospital on behalf of his patients at Zanmi Lasante by charming the pharmacists and lab workers (page 149). How do you feel about his unconventional approach to problem solving? Do you think that he could be more effective by working within a framework of existing policies and institutional structures, or by working to change policies that he sees as oppressive to the poor?

4. In the final paragraph of the book, Kidder makes a reference to the time he spent with the American soldiers before he met Paul Farmer and of how he regarded the plight of the suffering people. In what ways have Kidder and his viewpoints changed since first meeting Farmer? How did your own perception of Farmer’s life and work change, if it did, as you read the book?

This Teacher’s Guide is recommended for use by high school educators.

About the Teacher’s Guide Writer

Heather Kelly received her Master’s degree in Public Administration and Economic and Political Development from Columbia University’s School of International and Public Health and her Bachelor’s degree in English Literature from the College of William and Mary. She taught English at a high school in Papua New Guinea with the Peace Corps, and since then has worked on numerous international public health and economic development projects. She has worked with several non-governmental agencies and the United Nations Development Programme (UNDP) in East Timor, Nunavut, Tanzania, Kenya, and Uganda.

In Order to Live
Maryanne Vollers and Yeonmi Park

Who Killed These Girls?
Beverly Lowry

This Is Ear Hustle
Nigel Poor and Earlonne Woods

How to Survive a Plague
David France

Once a Warrior
Jake Wood

Promises to Keep
Joe Biden
Back to Top