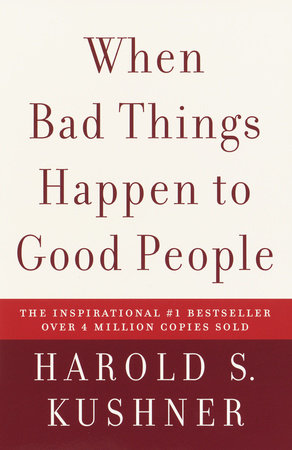 The introduction, discussion questions, suggested reading list, and author biography that follow are designed to enhance your group’s reading of Harold S. Kushner’s classic inspirational bestseller When Bad Things Happen to Good People. We hope that they provide you with new ways of looking at and talking about this book and the guidance, encouragement, and methods of coping with the challenges of life that Kushner offers.

As a young theology student, Harold Kushner puzzled over the Book of Job. As a small-town rabbi he counseled other people through pain and grief. But not until he learned that his three-year-old son Aaron would die in his early teens of a rare disease did he confront one of life’s most difficult questions: Where do we find the resources to cope when tragedy strikes?

In this honest and thought-provoking examination of his own and others’ reactions to the most painful experiences in life, Kushner addresses the difficult questions that inevitably arise. People either blame God and lose their faith, or see their tragedy as a punishment from God, which only drives them deeper into despair. Kushner suggests that we must come to the conclusion that God is not the author of our misfortunes but rather the source of help and strength.

1. What is wrong, according to Kushner, with the quotations from the Bible on page 12? Such teachings tell us that God is in control and makes things happen for a reason; why does Kushner disagree with the perspective they express?

3. Throughout the book, Kushner emphasizes the role of community in bringing people through their worst pain and grief. He mentions Jewish traditions like the meal of replenishment and the recitation of the Mourner’s Kaddish [p. 133], which shift the focus away from grief and death and back to life. Why is this idea so important, and why is it so often overlooked by people who are suffering from a loss?

4. What is the main message of the prayer written by Jack Riemer [pp. 130–31]? How does it differ from the kinds of prayers people often pray, like asking God for acceptance to a certain college or asking for a relative to get well? How is it similar to or different from the prayer of Jacob, discussed on pages 136–37?

5. Do the ideas expressed in When Bad Things Happen to Good People apply equally well to private and public tragedy—say, one person’s death from cancer as opposed to the massive loss of life that took place on September 11, 2001, or the devastation of the 2003 earthquake in Iran? How might these ideas affect a reader’s moral understanding of history’s worst events?

6. Why is the story of Job so important to this book? What insight does Kushner bring to the story?

7. Kushner writes, “I no longer hold God responsible for illnesses, accidents, and natural disasters, because I realize that I gain little and I lose so much when I blame God for those things” [p. 147]. Does it make sense that God is not an active agent in human misfortune? Why do most people think that God is responsible for the bad things that happen to us?

8. The idea that suffering has no meaning is “the most significant challenge that can be offered to the point of view I have been advocating in this book” [p. 148]. How does Kushner come to terms with this problem?

9. What is the wisdom in Kushner’s suggestion that we should always focus on looking forward, asking ourselves, “Now that this has happened to me, what am I going to do about it?” [p. 149]

10. Kushner writes, “There is a crucial difference between denying the tragedy, insisting that everything is for the best, and seeing the tragedy in the context of a whole life, keeping one’s eye and mind on what has enriched you and not only on what you have lost” [p. 153]. Why is this shift in perspective so important?

11. “The facts of life and death are neutral. We, by our responses, give suffering either a positive or a negative meaning” [p. 151]. How central is this statement to the book’s overall argument?

12. Kushner says that he would give up all of the wisdom and sensitivity that he gained through his own suffering in order to be “the father of a bright, happy boy” [p. 147]. If Kushner’s son had lived, it is unlikely he would have written this book. Kushner argues that suffering is not ennobling, yet his readers might argue that in his case it was. What is the creative potential of tragic experience?

13. If you could summarize in a sentence or two how this book has changed your perspective on the most difficult problems you face, what would you say? What inspiration does the book offer for you?

The Lord Is My Shepherd
Harold S. Kushner

A Course in Miracles Made Easy
Alan Cohen

More Beautiful Than Before
Steve Leder

Love is the Way
Bishop Michael Curry and Sara Grace

Women Who Run with the Wolves
Clarissa Pinkola Estés Phd

The Way of the Heart
Henri J. M. Nouwen

The Mastery of Love
Janet Mills and Don Miguel Ruiz

The Body Is Not an Apology, Second Edition
Sonya Renee Taylor

To Be Told
Dan B. Allender

Here All Along
Sarah Hurwitz

Reaching Out
Henri J. M. Nouwen
Back to Top