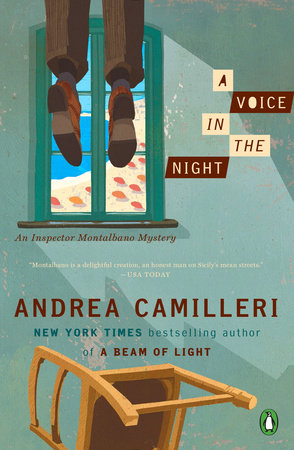 Editors get very passionate about books they work on – the Editor’s Desk series is his or her place to write in-depth about what makes a certain title special. Get the real inside-scoop on how books are shaped by the people who know them best. Last fall, we celebrated New York Times and internationally bestselling author of the Inspector Montalbano mystery series Andrea Camilleri’s 90th birthday with the publication of A Beam of Light. This year we’ve hit another incredible milestone—A Voice in the Night is the twentieth novel in his Montalbano series. Having the opportunity to work on a beloved cult classic like the Montalbano series is truly a privilege. The novels sensuously capture the sense of Sicily, from the sun-soaked buildings and seaside views, the simmering food on Montalbano’s plate, to the do-as-you-please attitudes of its inhabitants. The books are translated from Italian, and Stephen Sartarelli’s skill as a translator is on ample display in the ease and rhythm of the quick-witted and wryly humorous dialogue. In reading the first draft, I found it fascinating to consider the nuances of translating from the Italian, as Camilleri often employs several Sicilian dialects within a single novel. I do wonder what cultural idiosyncrasies are lost in translation, but am always pleased that the humor and warmth translate fully. A Voice in the Night brings us back to the Sicilian town Vigàta, where Montalbano’s moody demeanor has taken a dive as another birthday rolls around. To cheer himself up, he deals with a young driver’s road rage in his own way, and surprisingly, finds himself confronting the young man once again, this time as the suspect of a gruesome murder. Many of the series’ trademarks make a welcome appearance in A Voice in the Night—lighthearted spats and make-ups with Livia, Catarella’s mispronunciations as unintentional linguistic jokes, the seemingly omnipresent influence of the mob in both the streets and halls of government. And of course, there is the food. (A particularly memorable scene casts a two-foot octopus as murderous foe before vengeful food dish.) Camilleri’s charming creation, Inspector Montalbano, continues to delight and surprise me. Flawed but lovable, the Sicilian Inspector is great company, and it’s with a lot of enthusiasm that we get to share this series with English speaking readers. A Voice in the Night won’t disappoint longtime fans of the books, but it’s also a good jumping-off point for new readers to acquaint themselves with Montalbano’s Sicily. Luckily for me, and for you, dear reader, this isn’t Montalbano’s last case.
Back to Top