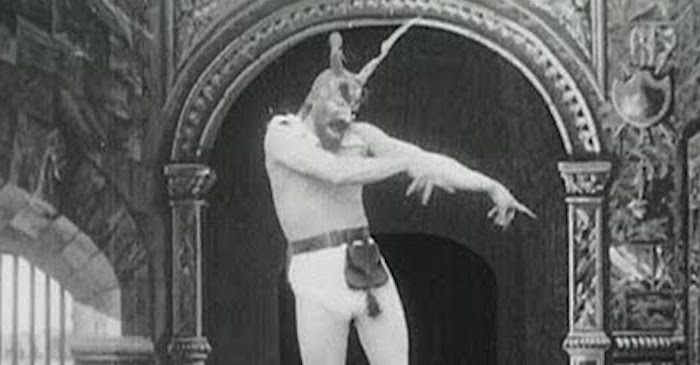 This article was written by Matt Staggs and originally appeared on Unbound Worlds. In Simon R. Green’s From a Drood to a Kill, a deal with the devil draws supernatural fixer Eddie Drood into a deadly contest where the winner takes all, body and soul. Eddie wasn’t the one who made the deal with the devil: It was someone else, but he’s got to pick up all the pieces. It’s a great story, and a fun variant on a familiar theme. (How fun? Like, occult James Bond fun.) You’d think that at this point just about everyone would know that a contract with Satan isn’t going to work out the way they want it to, but people keep doing it. Sure, there are exceptions to the rules (John Constantine, I’m looking at you), but chances are that anyone that enters into a bargain with the Great Beast is going to be ruined in the end. But say you want to do it, anyway. Even if you think you’re lucky and smart enough to beat Beelzebub at his own game, selling your soul isn’t as easy as starting an auction on eBay. At least it isn’t anymore. The first thing you’re going to have to decide is which devil you want to do business with. I know you might have heard that there’s just one devil, but medieval demonologists believed there were gazillions of demons and devils just waiting to get their hooks into tasty, tasty human souls. DIAL-A-DEMON You could waste a bunch of time thumbing through ancient texts in some wizard’s library in a dungeon somewhere, but when it comes to finding a fiend in a hurry, I prefer Michelle Belanger’s The Dictionary of Demons. This compendium of cacodaemons is like Hell’s Yellow Pages, and if there’s a demon or devil, chances are it’s in there. You can flip through at random like that time you needed a bail bondsman in Vegas (What, you didn’t think I knew?), but your best bet is going to be searching by area of expertise. (Devils, like doctors, have specialties.) It’s not going to do you very much good to call up Bathin, the demon of herbs and precious stones, when you really just want a new ride. For that you want Saltim, who can gift wizards with flying thrones. Don’t waste your time or their’s: It’s busy in Hell, especially during the presidential election. BLOOD RED TAPE Presuming you’ve found the right devil, you’re still going to need to do all the paperwork. Yes, as you can imagine, Hell is big on paperwork and bureaucracy in general. It’s the national pastime in the Underworld, so you’d better do your homework (also invented by demons). As hard as it is to believe, it’s just about impossible to find an attorney who works with demonic contract law, so for proper advice, we’re going to have to turn to people who allegedly made a deal with the devil. PARTNERS IN PERFIDY:

Robert Johnson (1911 – 1938) The undisputed master of the Delta Blues is rumored to have met the devil at the crossroads to bargain for his soul. Johnson got his wish and became a famous bluesman, but died at only 27 years of age. The exact location of Johnson’s crossroads is unknown, although some people suggest the intersection of US 61 and US 49 in Clarksdale, MS. That’s as good a place to begin your search as any. If you don’t find the devil, there’s still a good chance you’ll find God: Morgan Freeman is a Clarksdale native, and is not infrequently spotted hanging out at his Ground Zero Blues Club. Expert Advice: Take a trip to the Delta and look for the devil at the crossroads. At worst you’ll have some incredible food and enjoy some great music.

Jonathan Moulton (1726 – 1787) Revolutionary War hero Brigadier General Jonathan Moulton took trolling to an epic level when he sold his soul for an agreement that the devil would fill his boots with gold every day. Unafraid to try the father of lies at his own game, Moulton cut the soles out of his boots and placed them on the top of his chimney. After Old Scratch came along to fill up Moulton’s boots and found that he couldn’t, he burned Moulton’s house down. Expert Advice: There’s no way you’re getting a square deal out of the devil, and you’re going to Hell anyway. You might as well try to pull one over on him.

Nicolò Paganini (1782-1840) This Italian violin virtuoso was gifted enough that people just assumed that he had made a deal with the devil. The rumors dogged him until the day he died — and after. Following his death in 1840, the Catholic church in Genoa refused to give him a Christian burial. Is there any truth to his association with Satan? Maybe, maybe not, and It’s unlikely the devil will give you a straight answer. Expert Advice: Even if you don’t make a deal with the devil, you might as well let people think you did. It’s obviously good publicity if we’re still talking about it nearly 2 centuries later. Just clear everything up with your priest, first.

Theophilus of Adana (? – 535 AD) Unhappy with his lot in life as an archdeacon in the church, Theophilus decided to explore his options as a free agent. He hired a necromancer to summon the devil, who offered Theophilus a position as a bishop in the church in exchange for his soul. Theophilus signed a contract in blood and was promoted shortly thereafter. Apparently Theophilus looked at his chances as a mole in God’s operation and decided they weren’t so good. He took the contract to another bishop and asked for his help. The bishop ripped up the contract and Theophilus died on the spot … supposedly out of joy to have gotten out of the deal, but it’s not like he’s around to ask. Expert Advice: Whether you’re getting in or getting out of a deal with the devil, it’s good to have a professional at your side. You might have a hard time finding a necromancer these days, but there’s always Craigslist. NEXT STEPS: Grab your guitar or violin, hang a pair of boots over your chimney, put your bishop’s phone number on speed dial, and grab the next flight out to Clarksdale. Chances are this won’t end the way you want it to, but you can’t say I didn’t warn you. Presuming you do make contact with the devil, then you’re probably going to want to start thinking of ways to get out of your contract. Here are a couple of maybe-tried and not-so-true methods. Fiddle Contest: Apparently, Satan can’t resist a good old fashioned fiddlin’. See this instructional video. Sell Out Fido: Famous English Folk Hero Jack O’Kent tricked the devil into building him a bridge by promising him the soul of the first person to cross the bridge. He tossed a bone across it and went running after it. Tough luck, Spot. If All Else Fails, Become a Glutton for Punishment In “The Simpsons: Treehouse of Horror IV”, Homer sells his soul to Satan Flanders for a donut. Once he gets to Hell, Satan attempts to punish him by stuffing him with donuts. Rather than being horrified, Homer is delighted. Clearly the devil underestimated Homer’s appetite. Chances are that the devil isn’t going to offer you any breakfast pastries, though. Maybe you should develop an appetite for sulfur and brimstone now. Are You Really Sure You Want to do This? We’ve had fun here, but It is my final recommendation that you do not pursue a deal with the devil. He and his ilk are veteran tricksters who have spent many millennia bargaining with foolhardy mortals who thought themselves clever, only to wind up spending eternity slow-roasting over a pit of flaming viper venom. Nevertheless, if you’ve read this far then nothing I could say would likely steer you from this course. However, in good conscience, I cannot let you proceed without providing these examples of supposed deals with devils that went terribly wrong. Pic: “The Devil and the Statue” (1901)/(PD)
Back to Top