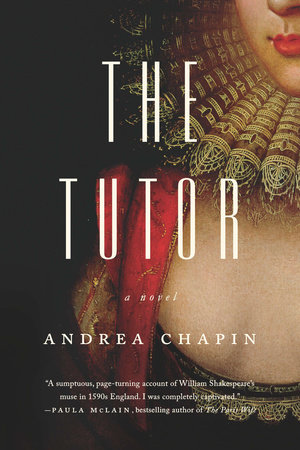 How would you recommend creating and getting to know your characters? I write historical fiction—some of my characters are based on real-life people, while others are invented. But the process of developing who they are is very similar for both the fact-based and the fictional characters. When I began The Tutor, I did a minimal amount of research because I didn’t want the history, the facts, to get in the way of the story. As the novel progressed I did a tremendous amount of research, but at the start I was interested in developing the dynamics between my main characters, how they reacted to each other—so I hurled them into situations where their dialogue and their actions began to convey their personalities, their likes and dislikes, their anxieties and obsessions. I wrote the first fifty pages this way, so that I got to know my characters before I started soaking them with the actual history of the times. For all my characters, I bring traits of people I know, including myself. But sometimes, and this is the alchemy of the art, I don’t even realize who I’ve brought in, what ghosts from my past I’ve conjured in creating these characters, until I’ve finished writing. Is there something you do to get into a writing mood? Somewhere you go or something you do to get thinking? Over the years I’ve learned that for me there are no special places I go and no special things I do to get into the mood to write: I just sit down and make myself do it. Sometimes it’s easy and sometimes it’s very hard. There is a wonderful magic that often comes with the process of writing—the sentences or moments that seem to come out of nowhere and light up the page—but I don’t think there’s any magic to the act of sitting down to do it. You have to stay at it and feel as though you are stuck to that chair with Velcro. I guess I’m afraid that if I have to go to a special place or do a special thing in order to write then the process will become precious, even fetishized, and that I will lose the natural, organic impulse. I can work with kids running around me, dogs barking, piles of laundry undone, dinner waiting to be made, bills waiting to be paid, or I can work while I’m alone and there is peace and quiet. Did you always want to write? How did you start your career as an author? My first “novel” was a mystery called, well, The Mystery of the Green Glass. I wrote it in third grade, longhand, on thick yellow paper with a thick pencil. I wish I had that copy now! My third-grade teacher launched a literary magazine for her students to publish poems, short stories, and art. This was way back before computers were ever used in schools or were ever used at all. We painstakingly wrote and drew everything on mimeograph paper and then printed out copies on the mimeograph machine in the school office. I started my mystery “novel” for that magazine, and then I just kept on going. I remember the satisfaction I felt as the stack of yellow paper grew on my desk. A few years later, my stories became more personal: I’d sit on the basement stairs of our house, in the dark, and in my head I’d write very autobiographical accounts of all the dysfunctional things that were going on with my family. Decades later, after I’d published journalism and a few short stories, it was returning to my autobiographical voice and then publishing memoir pieces and personal essays that truly enabled me to find my voice and to launch my career as a writer. What’s the best piece of advice you have received? Stop talking about how you’re going to write—sit down and do it! Because the real learning starts when you commit yourself to putting the words down on the page. What clichés or bad habits would you tell aspiring writers to avoid? Do you still experience them yourself? For writing novels: I think it’s very important to get through the first draft before you start extensive rewriting and revising. It’s hard to know what that first chapter or those first several chapters need to be until you’ve gotten to the end of your story. I remember I wrote a novel in graduate school, and years later I looked at all the drafts of the first chapter that I’d labored over–draft after draft after draft where I tried to incorporate all the comments from my workshops and all my neurotic insecurities about a word or a sentence or tense (past or past perfect, etc.). I think I wrote at least twenty drafts of that first chapter. When I looked at them again, years later, I realized they were all pretty much the same and that I’d been like a cat licking the same patch of fur over and over again. I could have written a draft of the whole book in the time that it took me to rewrite that first chapter so many times. Learn more about The Tutor here.
Back to Top