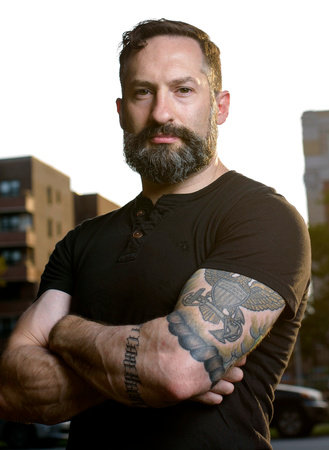 MYKE COLE is a devoted comic fan and voracious fantasy reader who never misses his weekly game night. His fandoms range from Star Wars to military history. He’s a former kendo champion and heavy-weapons fighter in the Society for Creative Anachronism. At the D&D table, he always plays paladins. After a career hunting people in the military, police, and intelligence services, Cole put these skills to good use on CBS’s hit show Hunted and on Discovery and Science Channel’s show Contact. Myke is the author of the contemporary military fantasy Shadow Ops series and its prequel, the Reawakening trilogy. He’s also the author of the Sacred Throne trilogy, which begins with The Armored Saint. His first work of nonfiction, the ancient military history Legion versus Phalanx, will be followed by The Bronze Lie in 2021. Myke lives in Brooklyn, New York.

Myke Cole’s Reawakening Trilogy comes to an explosive end on Halloween with the release of the third and final volume: Siege Line. We spoke with Cole about his new book and more at New York Comic Con 2017.

PENGUIN RANDOM HOUSE: You’ve got a new book coming out.

PRH: That’s exciting. Are you a Halloween guy?

MC: Yes, Halloween, as you know, is Goth Christmas, and I think for most nerds it’s our favorite holiday. I’ll reveal something to your audience: It is the day after my birthday. I’m excited to have the series wrap up on Halloween.

PRH: It isn’t out yet, but can you tell us a little bit about the book?

MC: It wraps up the entire Shadow Ops line for me. It is my last military fantasy book for the foreseeable future, and it is the final showdown between good and evil in an apocalyptic wasteland. I just did a piece for John Scalzi’s Big Idea blog that talks about Ragnarok, the Twilight of the Gods, and how apocalypses normally take place in wastelands because that barren landscape sweeps everything away and focuses you on the final conflict, but the truth is that landscapes aren’t barren, and they aren’t unpopulated: There are people living there with cultures and histories. I set Siege Line in Canada’s Northwestern Territories, which are way out in the hinterlands, but there are people living there, the Dene people, and they have been since before there was a Canada — or a United States. The supporting character, the sheriff of the town of Fort Resolution, where the action takes place, is Wilma “Mankiller” Plante. She swarmed that book. I intended for her to be a supporting character, and she took that book over. She is now on the cover, and I’m a lot more educated about the Dene people out there than I was when I first started. I really think the book took a positive turn as a result of that, and I’m excited to have people read it.

PRH: Do these books offer you an opportunity to learn more about something you were interested in anyway, or do the books themselves dictate what you’re going to get into?

MC: I never set out to have the books expand who I was as a person and to educate me. I set out for each book to be different from the other ones: that was the goal. What happened was the real way you make a book different is not in setting or plot, but in character: writing from the perspective of people who are nothing like you. That is why Control Point is from the perspective of an African-American guy growing up in Vermont. Fortress Frontier is from the point of view of a married, forty-something senior military guy, Breach Zone is from multiple points of view, including that of the antagonist, Scylla, who is a high-ranking corporate muckety muck who grew up as a business analyst in New York, Gemini Cell is Jim Schweitzer, but also has a character who grew up in the hinterlands of Afghanistan, and another who grew up in the slums of Haiti. With Siege Line, I have Mankiller, an Afghanistan veteran of the Canadian army doing explosive ordinance disposal, who is one of the Dene people from the ass-end of Canada. Writing from those perspectives has forced me to be empathetic, and to learn about other people’s perspectives I would have never considered any other way — to really, really consider them, and to get into their heads and into their shoes. The reality is that if you truly don’t empathize with people, even though they’re nothing like you, then you’re not going to evoke convincing characters. They’re going to fall flat, and your books are going to suck. I’ve been really lucky, and it has been really rewarding to write in this way because I think it has broadened me and made me a better person. The great antidote to being an ethnocentric asshole is to expose yourself to the rest of the world. Writing has been a great way to do that.

PRH: Let’s talk about our own background: You’ve served in the military. What are some of the things people get wrong about that?

MC: The thing for me is that people seem to think that the military is a monoculture. We subscribe a lot of action hero attributes to people in the military and law enforcement, but the reality is that the military is a microcosm of society: We are you, and you are us. I mean that in the broadest sense. If you’re walking around Comic Con here, you’ll see gay people, trans people, tall people, short people, people with green hair, people with nose rings, people who are left wing, people who are right wing, people of all religions — and all of that is in the military. The idea that the military is wrong thing is absolutely untrue, has never been true, and is, in fact, a recipe for a lousy military. I’ve worked pretty hard in all of my books to dispel that myth. One of the common complaints I got about Control Point, the first novel I put out in 2012, was that the main character was not confident and had poor judgment — that he flip-flopped in his decision making. That was by design: I wanted to defy reader expectations. When someone says, “How can he be in the military?”, my response is, “No, that is the military.” The military is everyone. I’d really love to crush the Steven Seagal kind of imagery that comes out of it. That’s not accurate, and it isn’t effective. Even if it had been accurate, I don’t think you would have an effective military, especially as fast as the world is changing, and as many spots the American military is involved in today and can expect to be involved in the future.

PRH: You’ve got a few more things coming out pretty soon. Want to tell us about those?

MC: In February, my first non-military, straight-up dark — I’d even go so far as to call it grimdark fantasy — The Armored Saint, will be publishing from tor.com. Shortly after that, my first non-fiction ancient history book, Legion vs. Phalanx, will be coming from Osprey: Bloomsbury’s highly illustrated military history imprint. That is going to be chock full of photographs and drawings. You’re going to get a real, almost photographic visual impression of what happened when these two formations fought.