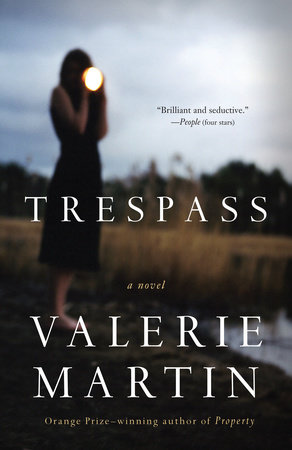 The introduction, questions, and suggestions for further reading that follow are intended to enhance your group’s discussion of Valerie Martin’s Trespass, an ambitious intellectual thriller about a comfortable, cultivated American family forced into sudden proximity with the discomfiting, the lawless, and the wild—particularly the wildness of history.

To Chloe Dale, the initial threat is Salome Drago, the smart, sexually confident young woman with whom her cherished son Toby has fallen in love. That Salome is also a refugee from the brutal war in Croatia only complicates her feelings. Is this girl, who seems to live on coffee and argument, someone to be resented or pitied or feared? And why does Chloe’s husband Brendan refuse to see what a threat she is?

At the same time, Chloe is disturbed by a poacher who is stalking the woods near her Connecticut home, shooting whatever animals catch his fancy with little regard for his neighbors’ property lines or safety. Oddly, the poacher, too, is a foreigner, though no one seems to know what country he comes from. Chloe thinks of him as Middle Eastern, an idea that may be partly inspired by the impending U.S. invasion of Iraq. Chloe, Brendan, and Toby are united in their outrage at their country’s imperial venture but feel helpless to stop it.

A further layer of narrative concerns the Dales’ professional lives. Chloe is an illustrator, and her latest project is a new edition of Emily Brontë’s Wuthering Heights, a novel that has a dark, resentful outsider at its heart. Brendan, a historian, is writing a book on the Crusades and the ambivalent figure of Frederick II, the Christian emperor who deeply respected Islam and was excommunicated for it by the Pope, with catastrophic repercussions for relations between the European and Arab worlds.

As Salome becomes a more exigent and abrasive presence and the poacher a more intrusive one, tensions within the family mount. The characters say things they don’t mean or mean too much. Violence becomes more than a metaphor. And the enthralled reader comes to see how thin a membrane separates the personal from the political, memory from history. Trespass is a serious work of tragic depth and spellbinding narrative power.

1. What is Chloe’s initial impression of Salome? What about her does she find so threatening? Are these the same traits that make her attractive to Toby (and, incidentally, to Brendan)? Are Chloe’s perceptions accurate? What clues does the author plant to suggest that she may not be entirely reliable? Conversely, about what does she turn out to be a more accurate judge—and not just of Salome’s character?

2. Early on, Toby tries to reassure his mother by telling her that Salome is “very serious [p. 4].” Is he right? What are the possible reasons for Salome’s seriousness, and in what ways might those reasons contribute to both her allure and her destructiveness? One synonym for seriousness is gravity. Have the events in Salome’s past given her more gravity than the other young women Toby has known? What other characters in the book possess a similar gravity, and what lies behind it?

3. Salome has her own opinions about Chloe. The older woman’s seemingly offhand remark about political arguments strikes her as a deliberate insult; her protectiveness of Toby translates as contempt for him. Might any of Salome’s perceptions be correct, or do they stem from the same paranoid and totalizing world view that makes her accuse Toby of siding against her and later causes her to turn violently against her father? What other characters in the novel see the world in similar terms, and with what results?

4. Salome instantly inspires feelings of fear and dislike in Chloe, so that even the girl’s gaze makes her think of “a spider darting out crazily from some black recess in the basement [p. 5].” The poacher, too, inspires her immediate foreboding and antipathy. Putting aside the question of whether her fears are justified, might they be self-fulfilling? Might Brendan be right when he later observes that “Chloe is making herself sick [p. 83]? ” Where else in the novel do people’s fears and suspicions become self-fulfilling?

5. Speaking of spiders, other species play a large supporting role in Trespass. Some characters resemble animals, as Salome, for instance, is said to resemble a fox. In her illustrations for Wuthering Heights, Chloe gives Cathy a totemic goshawk. We might also note Chloe’s beloved cat Mike and the poacher’s dog, whose breed is as indeterminate as its owner’s nationality. The militias who run amok through the novel’s Croatian sections, leaving a wake of the dead, proudly call themselves the wolves. What does the presence of animals do for Trespass? In what ways do animals serve as stand-ins for the individuals in the book, and how does the novel’s changing perspective on them (to Brendan, a fox is a predator, but the one Toby remembers seeing in a museum was trapped and helpless) mirror its approach to human character?

6. What is the significance of Chloe’s illustrations for Wuthering Heights? How do her thoughts about that novel and its characters seem to comment on people and events in her own life? Are Wuthering Heights‘s two houses literary ancestors of the ones inhabited by the Dales and the Drago? When Chloe characterizes Heathcliff as “the vengeful orphan, the ungrateful outsider” [p. 195], is she really thinking of Salome, or perhaps of the poacher? Might Heathcliff, a savage trespasser for whom grave-robbing is the highest expression of love, be a prototype for men like Milan and his army of butchers?

7. In an exchange with Toby’s parents, Salome dismisses her family’s Cajun neighbors as ignorant. It’s one of the few times in the novel when the characters are united in laughter. But the Dales, too, are sometimes ignorant. Chloe wonders if Croats are Muslims and mistakes the poacher for a Middle Easterner. Even characters who are better acquainted with the facts often misinterpret them, as Toby does when he thinks that his bride has left him for Macalister instead of her mother. Discuss the role that ignorance and misinterpretation play in Trespass.

8. How does Brendan’s work-in-progress on the life of Frederick II reflect or anticipate events in the novel? What lessons might some of the novel’s characters derive from the story of the emperor’s relations with the Sultan of Jerusalem? What might that story have to teach George W. Bush, who once described the war on terror as a crusade? How might it be read by the wolves of wolf town? How does Brendan’s view of Frederick as a pragmatic, but not too reliable, deal-maker compare to his academic rival’s portrait of him as a secret apostate? In what way is all of Trespass a book about the conflict between pragmatists and ideologues or, put another way, between realists and fanatics?

9. The novel offers two views of this conflict. They might be summed up by two aphorisms. There’s the one that the youthful Chloe used to keep taped to her bedroom door: “Those who restrain passion do so because theirs is weak enough to be restrained” [p. 71]. And there’s the one by Yates that Brendan remembers while attending a decidedly limp peace rally: “the best lack all conviction” [p. 76]. The aphorisms would seem to be in agreement, until you remember the second half of Yeats’s line: “the worst are full of passionate intensity.” [p. 76] How would you describe the novel’s position on the split between pragmatists and fanatics? At what moments does the author tip her hand?

10. One of Trespass‘s observations is that people’s most extreme attitudes often contain their opposites and sometimes give way to them. Having spent her adolescence seething at her family’s repressiveness, Chloe grows up to be someone whom even mild-mannered Brendan characterizes as “bourgeois,” [p. 108] a householder who prizes rituals and religiously keeps a fire burning in her cabin’s woodstove. Do you find it significant that that woodstove is one of the few things Salome seems to like about her future mother-in-law? What does Salome—who at times seems willing to wage war against the entire world in the service of her desires—actually desire? Might it be to become as comfortably bourgeois as Chloe?

11. Of course, Salome may not want to be like Chloe so much as she wants to take her place. This may be the true reason for their mutual antipathy, as it may be the reason Chloe becomes so upset when the young woman asks how much land she and Brendan own. Is the threat posed by a trespasser the fact that the trespasser wants what we have—our property, our game, our lovers, our children—and is prepared to do anything to possess them? Which of the novel’s other characters might be described as a trespasser? Which of them most fears falling victim to one? Do any of Martin’s characters occupy both roles?

12. It may be her fear of her future daughter-in-law that causes Chloe to think of Goya’s horrifying painting of Saturn devouring his children, and to perceive that the reason someone might eat a child is “to keep him from replacing you [p. 164].” The implication is that a trespasser may be far less dangerous than someone who is defending himself from being trespassed against. Consider Andro’s catastrophic reaction to the trespasses of his mother and sister. Consider that Iraq was invaded in the name of America’s national security. Consider that the men who destroy Jelena and her family think of themselves as defenders of an old way of life.

13. Of all the novel’s characters, only Jelena is introduced obliquely, and she’s the only character who speaks for herself. When does it become apparent that the voice that periodically breaks into the Dale narrative is hers? When do we realize the identity of her interlocutor? Why might Martin have chosen to do this? How does Jelena’s harrowing story affect your perception of earlier events or the book’s other characters? Is it significant that Jelena’s sections are relatively short until after Chloe’s accident? Is it really Jelena who takes her place?

14. In this respect, how do you view the unfolding relationship between Brendan and Jelena? Is this relationship about love or something less savory: a bereaved widower’s flight from grief or a poor and uprooted woman’s quest for security? Is it an instance of the strange gravity possessed by those who have known history, and suffered it? What does it mean that at the novel’s end, Jelena is “the foreign woman” [p. 288]?

Valerie Martin is the author of three collections of short fiction, most recently The Unfinished Novel and Other Stories, and seven novels, including Italian Fever; The Great Divorce; Mary Reilly, the Dr. Jekyll and Mr. Hyde story told from the viewpoint of a housemaid, which was filmed with Julia Roberts and John Malkovich; and the Orange Prize-winning Property. She is also the author of a nonfiction work about St. Francis of Assisi: Salvation: Scenes from the Life of St. Francis. She resides in upstate New York.

The Bay of Foxes
Sheila Kohler

Ballad of the Black and Blue Mind
Anne Roiphe

The Other Side
Mary Gordon

Man in the Box
Thomas Moran

I Was Behind You
Nicolas Fargues

What It Takes to Be Human
Marilyn Bowering

The Art Student’s War
Brad Leithauser
Back to Top