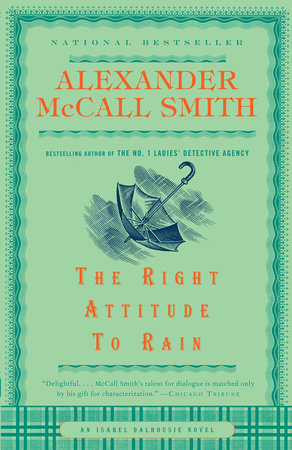 “Enchanting. . . . Delicious mental comfort food. . . . The ‘intimate’ city of Edinburgh is an appealing character in its own right.”
—Los Angeles Times

The introduction, discussion questions, author biography, and suggestions for further reading that follow are intended to enhance your group’s conversation about The Right Attitude to Rain, the third episode in the adventures of moral philosopher and Edinburgh native Isabel Dalhousie.

Isabel’s insatiable interest is roused when she observes a couple emerge from their illegally parked and very expensive car on an Edinburgh street. The man’s face is contorted with Bell’s palsy, while the much younger woman is a fresh-faced beauty. Moments later, in a nearby gallery, she sees them again and realizes that, like her long-dead “sainted” mother, the man and woman are American.

It turns out that Isabel’s cousin Mimi and her husband, who arrive for a visit from Dallas, are actually acquaintances of this oddly matched couple back in Texas, and Mimi introduces Tom Bruce, a rich industrialist, and his fiancée Angie to Isabel. Isabel quickly fears that Angie is only looking forward to getting her hands on Tom’s money, but should she get involved? Mimi also tells Isabel something surprising about her own “sainted American mother”—that before she died of cancer, she had an affair with a younger man.

The coincidences keep adding up because Isabel is, without a doubt, falling in love with her friend Jamie, who is fourteen years her junior. Furthermore, there are signs at last that Jamie’s feelings for Isabel are also more than friendly, and their relationship is tested when they are invited to spend the weekend at Tom and Angie’s country house for a party. The revelation of Isabel’s interest in Jamie enrages Isabel’s niece Cat, despite the fact that she has a new love interest herself—Patrick, a hard-working young man in finance whom Isabel fears is a mama’s boy.

When Angie makes a pass at Jamie, Isabel’s suspicions are confirmed, and it is now more than clear that Angie’s motives toward Tom are not those of a loving future wife. However, what is more confusing to Isabel is the fact that Tom confides to her that their meeting has made him doubt his feelings for Angie. Of course Isabel would love to give Tom some advice, but Jamie counsels her to stay out of it. Nonetheless, Isabel, the editor of the Review of Applied Ethics, can’t resist an ethical intervention, especially when people she cares about are concerned.

These moral quandaries and other philosophical dilemmas make for an Isabel Dalhousie novel unlike any other, the end of which holds a wonderful surprise, one that will cause readers to look forward all the more eagerly to future developments in Isabel’s life.

1. The novel opens as Isabel observes an obviously wealthy couple on a street in Edinburgh; she judges herself harshly for immediately disliking them, then decides to follow them into an art gallery: “She had been wrong to dislike them, and she owed it to them now to find out a little bit more about them. So it was not pure curiosity, even if it looked like it; this was really an exercise in rectifying a mistaken judgment” [p. 6]. What does this wry passage tell us about Isabel? Is her curiosity an admirable trait?

2. Isabel is in love with Jamie, but she feels that the age gap between them—she is fourteen years older than he—means that he will never love her. Is this a reasonable assumption? Is too much made of the age difference—by Cat, by Isabel herself—or is it truly a significant problem?

3. Isabel is putting together an issue of the Review of Applied Ethics on the subject of “character and its implications for moral involvement in the world” [p. 25]. As a philosopher she believes, “You may not be able to create a personality, but you can create a character for yourself” [p. 26]. The question hinges on what is given in us, and what we can change or will about ourselves. Do you think of Isabel as someone who has intentionally created a “character” for herself? Does this involve making moral choices?

4. Isabel thinks of her relationship to Grace, for whom she wants to buy an apartment, in terms of the concept of moral community [pp. 35–6]: Jamie feels that Isabel has no obligation to buy Grace an apartment, even though she can afford it and it would give her pleasure to do so. Likewise, Florence Macreadie has no obligation to offer the flat to Isabel at a lower price, but she does. How does the chain of relations involved in buying the apartment illustrate the concept of moral community?

5. A central issue in the novel has to do with perception—how we observe and interpret the behavior of others. Florence Macreadie observes, and makes assumptions about, the relationship between Isabel and Jamie [p. 68]; Isabel does so as well, about the relationship of Tom Bruce and his fiancée Angie [p. 119]. How accurate are the assumptions here? What is the novel saying about our interest in the private affairs of other people?

6. Cat “was attracted to tall young men with regular features and blond hair. It was a cliché of male beauty, really, and Cat subscribed to it enthusiastically” [p. 56]. What do Cat’s choices in romantic partners tell us about her? Why has Cat rejected Jamie, while preferring Patrick, for instance [pp. 55–61]? Does Isabel’s Darwinian theory regarding human attraction make sense [p. 56]?

7. What does Isabel mean when, after almost accepting the offer of the flat at a reduced price because of Florence Macreadie’s impression that she and Jamie were lovers, she says, "I have learned something about myself" [p. 70]? Was she being unethical in wanting to accept the offer?

10. If you have read the previous two novels in the series, did you assume that a love affair between Isabel and Jamie would ever happen? Read the full text of W. H. Auden’s poem, “A Lullaby,” from which Isabel quotes on page 204. Why does she call it “that most gravely beautiful of poems”?

11. Why does Cat respond so angrily to Isabel’s relationship with Jamie? She insists it is not jealousy she feels, “it’s disgust” [p. 228]. What might be the reasons for Cat’s anger? Are her feelings understandable, or not?

12. Angie, with her acquisitive habits, her insincerity, and her attempt to seduce Jamie, is the villain of the novel. Isabel has a dream that she has murdered Tom to get his money. Think about the contrast the two couples present: Angie is the young fiancée of an older, wealthier man, while Jamie is the boyfriend of an older, wealthier woman. Yet Tom discovers, on meeting Isabel, that he would prefer to be involved with her, not Angie. What qualities might have drawn Tom to Angie originally? Why would he now prefer Isabel?

13. Thinking about the changes she sees in her neighborhood, Isabel thinks, “There were pockets of character, of resistance, that held out against all the forces that would destroy local, small-scale things, even small-scale
countries” [p. 245]. What role do the Edinburgh setting and the Scottish cultural context play in making these
stories a pleasure to read?

14. Isabel worries that she is wrong to give Tom advice about Angie. As Jamie reminds her, she does have a tendency to get involved when she shouldn’t. Does she do so in this novel to the degree she has in the past?

15. How surprising is the final revelation? Earlier Isabel had thought, “She would not hold on to him; she knew that there would come a time when one of them would need to let go—and it would be him. When that time came she would not stop him” [p. 218]. How does the novel’s ending change Isabel’s idea that her love affair with Jamie is temporary? Were you surprised by what happened, or was it as you predicted?

Alexander McCall Smith is the author of the international phenomenon The No. 1 Ladies’ Detective Agency series, the Isabel Dalhousie series, the Portuguese Irregular Verbs series, and the 44 Scotland Street series. He is professor emeritus of medical law at the University of Edinburgh in Scotland and has served on many national and international bodies concerned with bioethics. He was born in what is now known as Zimbabwe and he was a law professor at the University of Botswana.

The Dog Who Came in from the Cold
Alexander McCall Smith

The Department of Sensitive Crimes
Alexander McCall Smith
Back to Top