The Love of a Good Woman Reader’s Guide 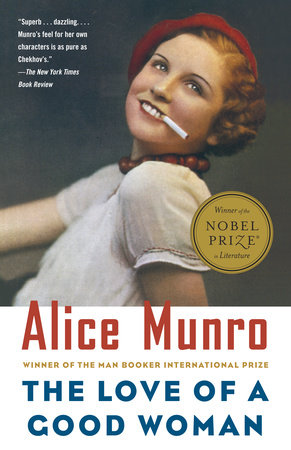 The Love of a Good Woman Reader’s Guide

print
The Love of a Good Woman Reader’s Guide

The questions, discussion topics, and author biography that follow are intended to enhance your group’s reading of Alice Munro’s collection The Love of a Good Woman. In these eight stories, a master of the form extends and magnifies her great themes–the vagaries of love, the passion that leads down unexpected paths, the chaos hovering just under the surface of things, and the strange, often comical desires of the human heart.

Time stretches out in some of the stories: a man and a woman look back forty years to the summer they met–the summer, as it turns out, that the true nature of their lives was revealed. In others time is telescoped: a young girl finds in the course of an evening that the mother she adores, and whose fluttery sexuality she hopes to emulate, will not sustain her–she must count on herself. Some choices are made–in a will, in a decision to leave home–with irrevocable and surprising consequences. At other times disaster is courted or barely skirted: when a mother has a startling dream about her baby; when a woman, driving her grandchildren to visit the lakeside haunts of her youth, starts a game that could have dangerous consequences. Large, moving, profound–these beautifully told stories reveal life’s rich layers and subtle implications, and in the process, expand the limits of fiction.

1. In the first story, "The Love of a Good Woman," how has the town of Jutland, its way of life and its mores, affected Enid’s character and desires and helped to mold her into the person she is? What does she want from life and what compromises has she made? Does she believe Mrs. Quinn’s tale of murder? If so, does it make Rupert more, or less, attractive to her? What exactly does she want from Rupert?

2. What does the author accomplish by dividing "Jakarta" into two parts–the distant past and the present? In what essential way do the two marriages (Kath and Kent; Sonje and Cottar) differ? How are Kath’s and Sonje’s different attitudes to marriage borne out in the subsequent courses of their lives? Might Sonje’s conviction that Cottar is still alive be true, or is it merely an attempt to hold on to a remnant of her former happiness?

4. In what ways are Eve and Sophie in "Save the Reaper" similar in character, and in what ways are they different? Would you say that Sophie, either consciously or unconsciously, has modeled her life on her mother’s? If so, is the situation changing? Why does Eve, in spite of her obvious fears, give the vagrant girl directions to her house? What might the title of the story (a quotation from Alfred, Lord Tennyson’s poem "The Lady of Shallott") signify?

5. How does Pauline, in "The Children Stay," perceive marriage and family life? Does the author imply that the pretenses and the feeling of imprisonment that Pauline experiences are present, to some degree, in every marriage? Is the "bleakness" Pauline senses in herself and her father-in-law due to their situations, or their characters? Pauline says at the end that Jeffrey was not Orphée. Is she being honest? In what ways does "The Children Stay" echo or parallel the story of Orpheus and Eurydice? What role does the idea of fate play for the various characters?

6. How does Karin in "Rich As Stink" perceive the dynamic between Rosemary, Derek and Ann? How closely does her perception correspond with the reality? Would you agree with Karin that Derek has "given up on" both Rosemary and Ann (p. 236)? How much has Rosemary’s wealth to do with her acceptance by Derek and Ann? Why doesn’t Ann want Derek to see Karin in her wedding dress, and why is Karin determined to wear it to the dinner party? What sort of future do you envision for Rosemary? For Karin?

7. In "Before the Change," what do the narrator’s experiences at home with her father tell her about her relationship with Robin, its illusions, and its unhappy end? Robin differentiates "ideas" and "life"; is he being cynical or simply realistic? How are the narrator’s beliefs about abortion and parenthood affected by her own mother’s death in childbirth, and how are these beliefs modified during the course of the story? How do her ideas about love, too, undergo changes? Might she have made different decisions about her love affair and pregnancy if she had it to do over again?

8. In "My Mother’s Dream," what has the dream, described at the beginning of the story, to do with Jill’s actual life and experiences? Has she known what it is to "leave" a baby? What relation does Jill’s struggle with the baby have to her struggle with George’s family and his memory? Would you say that this mother-child struggle is a universal one, extreme though it is in Jill’s case?

Learn More About The Love of a Good Woman
print

This Is Paradise
Kristiana Kahakauwila

A Multitude of Sins
Richard Ford