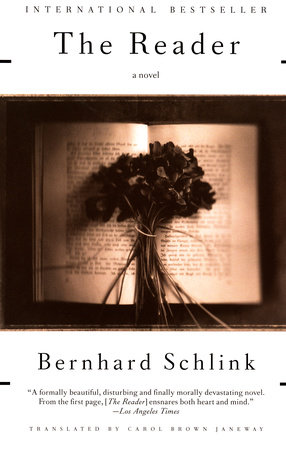 "A formally beautiful, disturbing and finally morally devastating novel. From the first page, [The Reader] ensnares both heart and mind." —Los Angeles Times

The questions, discussion topics, and author biography that follow are intended to enhance your group’s reading of Bernhard Schlink’s The Reader, a haunting story of love and guilt in which the legacy of Nazi crimes enters a young man’s life in an unexpected and irrevocable way.

Michael Berg is fifteen and suffering from hepatitis. When he gets sick in the street one day on his way home from school, a woman brings him into her apartment and helps him to wash up. Later, he visits the woman to thank her and is drawn into a love affair that is as intoxicating as it is unusual–their meetings become a ritual of reading aloud (Michael reads to Hanna, at her request), taking showers, and making love. When Hanna disappears following a misunderstanding, Michael is overcome with guilt and loss.

Years later, when Michael is studying law at the university, he is part of a seminar group attending one of the many belated Nazi war crime trials. He is shocked when he recognizes Hanna in the courtroom, on trial with a group of former concentration camp guards. During the proceedings, it becomes clear that Hanna is hiding something that is–to her–more shameful than murder, something that could possibly save her from going to prison. She chooses not to reveal her secret and as a result is sentenced to life.

Married and divorced, Michael has become a scholar of legal history and suffers from a haunting emotional numbness. To help himself through nights of insomnia he begins to read his favorite books aloud into a tape recorder, and he sends the tapes to Hanna in prison. The bond between the two is continued in this unique way until Hanna’s release from prison, when, in the face of Michael’s ambivalence and Hanna’s shame, their story reaches its anguished conclusion.

A parable of German guilt and atonement and a love story of stunning power, The Reader is also a work of literature that is unforgettable in its psychological complexity, its moral nuances, and its stylistic restraint.

1. At what point does the significance of the book’s title become clear to you? Who is “The Reader”? Are there others in the story with an equally compelling claim to this role?

2. When does the difference in social class between Hanna and Michael become most clear and painful? Why does Hanna feel uncomfortable staying overnight in Michael’s house? Is Hanna angry about her lack of education?

3. Why is the sense of smell so important in this story? What is it about Hanna that so strongly provokes the boy’s desire? If Hanna represents “an invitation to forget the world in the recesses of the body” [p. 16], why is she the only woman Michael seems able to love?

4. One reviewer has pointed out that “learning that the love of your life used to be a concentration camp guard is not part of the American baby-boomer experience.” [Suzanna Ruta, The New York Times Book Review, July 27, 1997: 8] Is The Reader‘s central theme–love and betrayal between generations–particular to Germany, given the uniqueness of German history? Is there anything roughly parallel to it in the American experience?

5. In a novel so suffused with guilt, how is Michael guilty? Does his narrative serve as a
way of putting himself on trial? What verdict does he reach? Is he asking readers to examine the evidence he presents and to condemn him or exonerate him? Or has he already condemned himself?

6. When Michael consults his father about Hanna’s trial, does his father give him good advice? Why does Michael not act upon this advice? Is the father deserving of the son’s scorn and disappointment? Is Michael’s love for Hanna meant, in part, to be an allegory for his generation’s implication in their parents’ guilt?

7. Do you agree with Michael’s judgment that Hanna was sympathetic with the prisoners she chose to read to her, and that she wanted their final month of life to be bearable? Or do you see Hanna in a darker light: do the testimonies about her cruelty and sadism ring true?

8. Asked to explain why she didn’t let the women out of the burning church, Hanna remembers being urgently concerned with the need to keep order. What is missing in her reasoning process? Are you surprised at her responses to the judge’s attempt to prompt her into offering self-defense as an excuse?

9. Why does Hanna twice ask the judge, “what would you have done?” Is the judge sympathetic toward Hanna? What is she trying to communicate in the moment when she turns and looks directly at him?

10. Why does Michael visit the concentration camp at Struthof? What is he seeking? What does he find instead?

11. Michael comments that Enlightenment law (the foundation of the American legal system as well as the German one) was “based on the belief that a good order is intrinsic to the world” [p. 181]. How does his experience with Hanna’s trial influence Michael’s view of history and of law?

12. What do you think of Michael’s decision to send Hanna the tapes? He notices that the books he has chosen to read aloud “testify to a great and fundamental confidence in bourgeois culture” [p. 185]. Does the story of Hanna belie this faith? Would familiarity with the literature she later reads have made any difference in her willingness to collaborate in Hitler’s regime?

13. One might argue that Hanna didn’t willfully collaborate with Hitler’s genocide and that her decisions were driven only by a desire to hide her secret. Does this view exonerate Hanna in any way? Are there any mitigating circumstances in her case? How would you have argued for her, if you were a lawyer working in her defense?

14. Do you agree with the judgment of the concentration camp survivor to whom Michael delivers Hanna’s money at the end of the novel? Why does she accept the tea tin, but not the money? Who knew Hanna better–Michael or this woman? Has Michael been deluded by his love? Is he another of Hanna’s victims?

15. Why does Hanna do what she does at the end of the novel? Does her admission that the dead “came every night, whether I wanted them or not” [pp. 198-99] imply that she suffered for her crimes? Is complicity in the crimes of the Holocaust an unforgivable sin?

16. How does this novel leave you feeling and thinking? Is it hopeful or ultimately despairing? If you have read other Holocaust literature, how does The Reader compare?

Bernhard Schlink was born in Germany in 1944. A professor of law at the University of Berlin and a practicing judge, he is also the author of several prize-winning crime novels. He lives in Bonn and Berlin.

Nonfiction:
Jean Améry, At the Mind’s Limits: Contemplations by a Survivor on Auschwitz and Its Realities; Hannah Arendt, Eichmann in Jerusalem; Tadeusz Borowski, This Way for the Gas, Ladies and Gentlemen; Peter Gay, The Bourgeois Experience; Daniel Jonah Goldhagen, Hitler’s Willing Executioners; Primo Levi, Survival in Auschwitz and The Reawakening; Tzvetan Todorov, Facing the Extreme: Moral Life in the Concentration Camps; Elie Weisel, Night.
Learn More About The Reader
print

The Hours Count
Back to Top